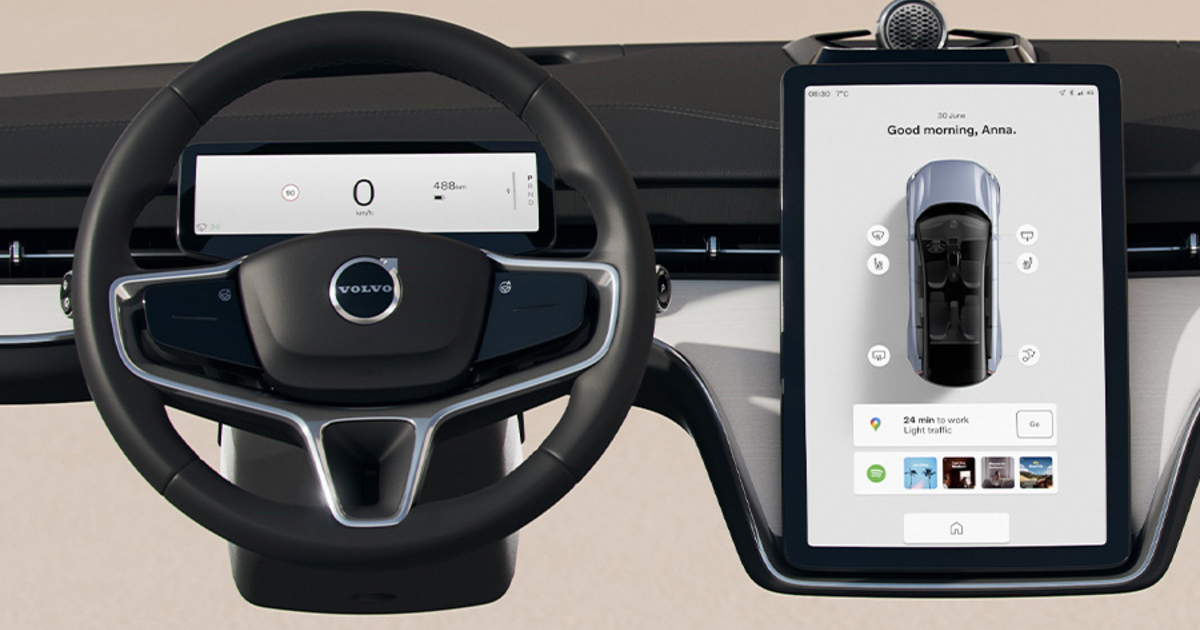 Volvo will use colors to signal the difference between driver-assisted mode and what it calls “unsupervised autonomous driving” mode in its full-electric flagship.

The EX90 driver-focused display screen visual through the steering wheel will use green to signal when the car is using assistance solutions such as lane keeping and adaptive cruise control.

This color, which will be used on the lane markings, on the car directly ahead and on a steering wheel symbol on the bottom right of the screen (see image, below), is carried over from current-generation Volvos.

The new color — blue/green or aquamarine — appears as a thin horizontal line across the top of the screen, on the lane markings, and on the car directly ahead (see image below).

This signals that the car has taken control of the driving.

Volvo said Tuesday its goal with the EX90 is “to make the transition from manual to assisted driving modes (and in the future, autonomous driving) in our cars effortless and intuitive.”

Volvo said in January it would make unsupervised autonomous driving available first to customers in the U.S. state of California before rolling it out in other markets.

The official launch of the automaker’s so-called Ride Pilot is pending Volvo’s internal verification that it is safe as well as approvals for use from local authorities in the different markets.

Volvo is also road testing autonomous driving features in Sweden as well as collecting data for its future system across Europe and the U.S.

Volvo said Ride Pilot will be available as an add-on subscription on the EX90, which will go into production later this year at Volvo’s U.S. factory near Charleston, South Carolina.

“It’s all about providing you with the right information at the right time,” Thomas Stovicek, head of user experience at Volvo, said in the release on Tuesday. “Since the car also understands its surroundings and you better than ever before, we can create an even safer situation by reducing mode confusion, distraction and information overload.”

Longtime Volvo executive Lex Kerssemakers, who is now the brand’s strategic advisor, told Automotive News Europe this summer that the automaker challenged itself to do less with more in the EX90.

“The question we have had to ask is: What aren’t you bringing?” Kerssemakers said. “The driver has to be able to operate all those features in a responsible way.”

The EX90 will be revealed Nov. 9 in Stockholm, Sweden.

Since Sept. 21 Volvo has been releasing details on the premium large SUV, such as its name, its key safety features — including standard with technology aimed at preventing hot car deaths — and that it will be a mobile power station.

The EX90 is the biggest all-new product debut for Volvo since the XC40 arrived in 2017.

Deliveries of Volvo’s top-of-the-line EV, which will replace the XC90 as Volvo’s flagship as it transitions into an electric-only brand, will start in early 2023.