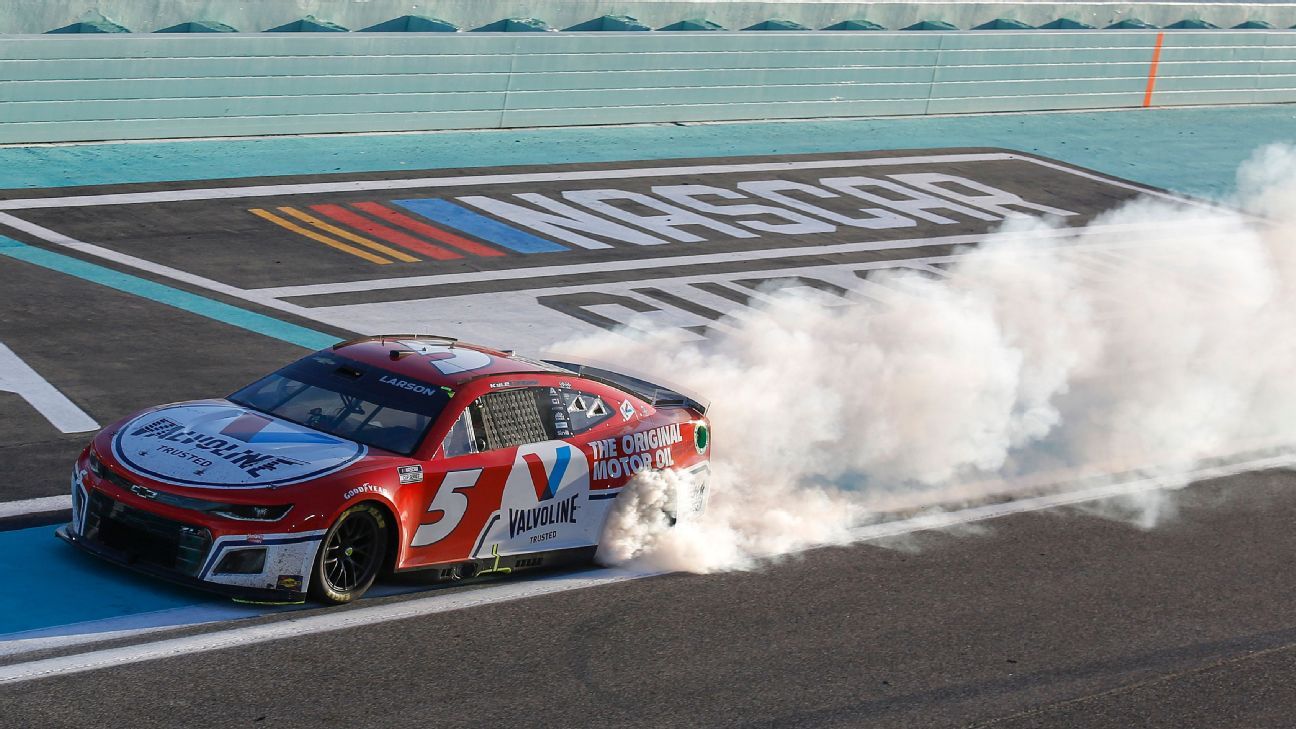 It’s the business end of the NASCAR Cup Series season. Joey Logano has secured his place in the Nov. 6 championship final race in Phoenix, and seven other drivers are looking to book their tickets to join him.

And while the title fight is as wide open as it’s ever been, there’s still plenty else to talk about, from Kyle Larson‘s Homestead-Miami dominance to Bubba Wallace‘s suspension to who’s primed for a big weekend at Martinsville on Sunday. So, with so much at stake in stock-car racing, ESPN turned to Ryan McGee and Marty Smith for their takes on the final few weeks of the 2022 NASCAR Cup Series season.

– Watch Formula One all season long on ESPN
– Don’t have ESPN? Get instant access

McGee: You and I have not talked about this yet, but Bubba Wallace was suspended for a race. It’s the first time a Cup Series driver was parked for an in-race incident since Matt Kenseth was in 2015. Marty, where do you net out on all of that? Because I feel like the repercussions are still rolling.

Smith: I think they absolutely are. And since we haven’t discussed Wallace’s actions, just completely unacceptable in every way. There are certain rules that do not get broken. And the No. 1 unwritten-driver-code rule is you don’t right rear somebody and hook them into the fence at 185 miles an hour.

McGee: In traffic. Out of a turn. All of it was so wrong.

Smith: Every bit of it was just unacceptable. And to quote Logano, who was very outspoken afterward, it could have killed Larson. Fortunately, he wasn’t even injured. And then, after Wallace hooked Larson into the fence, Wallace was extremely frustrated, got out of the car and started shoving Larson, who managed to maintain his composure the entire time and not participate in the fight. I don’t know how he did that, quite frankly.

I understand Wallace’s frustration, stemming from the fact that he felt like he got fenced, but he took that frustration out in a completely overboard and wrong way. If another competitor had run up to me after doing what Wallace did and started shoving me, I certainly wouldn’t have had the composure to walk away from it like Larson did.

McGee: And then turn around and put a beatdown on everybody the very next weekend at Homestead, and look an awful lot like Kyle Larson the 2021 NASCAR Cup Series champion.

Smith: That’s very apropos of Larson at Homestead-Miami Speedway, where, if you’re going to win, you have to run the top of the track, you have to make the top work. He’s the best maybe ever at making the top work. Larson kind of brought that into the sport in a lot of ways. Dale Earnhardt Jr. was very good at running the top during the later years of his career — really made that momentum off the corner, it was something to behold — but Larson took it to a whole other level with his world-class historic car control from being so adept on dirt.

Smith: No doubt. And it’s such an interesting time for NASCAR, because all the way back to February when we started this season, you and I just felt a unique energy. And every year, almost invariably, you get into the summer and it’s sort of the doldrums of the season and it’s starting to feel like a really long slog. But I still feel a really new momentum despite the fact that we’re 35 weeks in and I couldn’t begin to tell you who’s going to win the championship. And that is damn rare, man.

That’s another factor in NASCAR’s favor is that it really is shaping up to be kind of the Game 7 idea that they wanted all those years ago. They implemented this “four drivers, one race, winner-take-all” format that invariably seems to have rewarded the best team, but we’ll see what happens in 2022 when we get to Phoenix here in a couple of weeks.

McGee: I have never gone into the last two races of the year having zero clue what’s going to happen. In the first part of our careers, Jeff Gordon would’ve already won the championship a month ago, right? And then we have this, what I still call new format, with the final race being worth everything, but even then, you had a pretty good idea going in of who was the favorite and who wasn’t. And now we’re in a world where Ross Chastain leads the league in top-five finishes, and I think that’s awesome, but it also makes me realize I have zero clue what’s going to happen. And I dig that.

Smith: I still have my money on Chase Elliott. I just feel like that No. 9 car, they just have a very unique chemistry with him and his crew chief Alan Gustafson, and they understand what it’s like to get it done. I think a lot of people right now are kind of thinking, “Okay, might this be Denny Hamlin‘s year? Could this be the time that he closes it out?” And you know, next weekend’s going to be critical for him, because he is so good at these short tracks.

McGee: Martinsville is the best because it’s crazy and it’s unpredictable, but you’re exactly right. We’re going to a place where Hamlin has been racing since he could barely walk, going back to those Allison Legacy cars. That’s the first time I saw Hamlin race. And oh, by the way, you know who else is really good at Martinsville? Bubba Wallace.