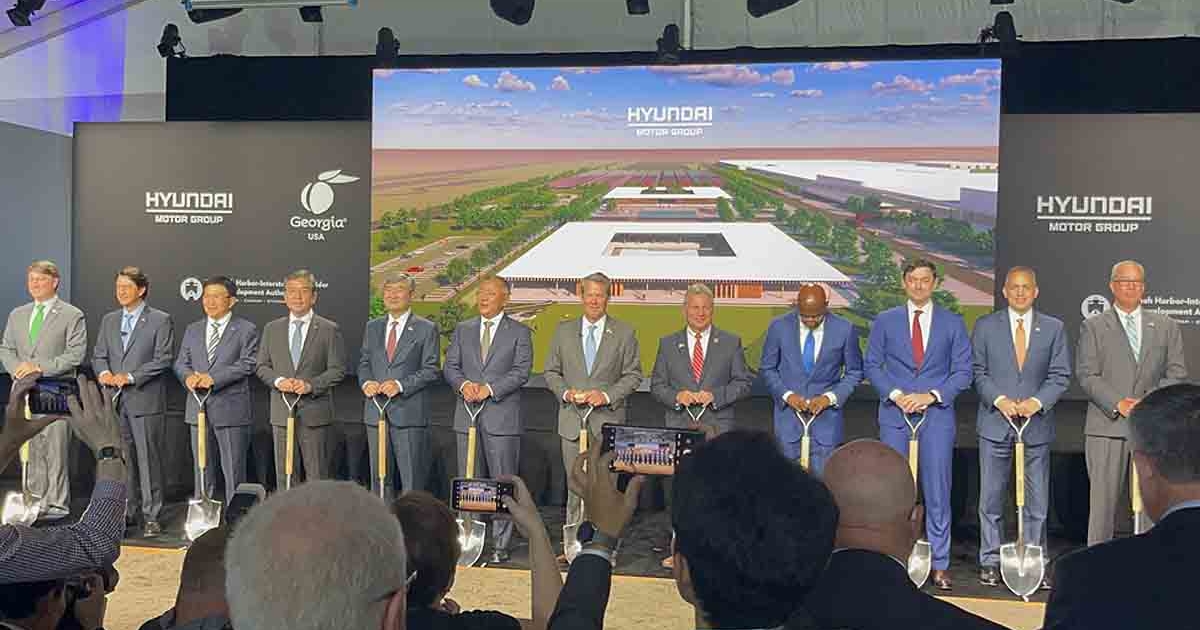 Jose Munoz, Hyundai’s global chief operating officer, said the dedicated EV factory, to be called the Metaplant, will build up to six models and have the capacity to produce up to half a million vehicles a year on a 2,800-acre plot of land 30 miles northwest of Savannah.

“We are making the current investment to get to 300,000 vehicles in phase one, and then 500,000,” Munoz said at a media roundtable after the groundbreaking ceremony.

“Construction is expected to start as soon as possible, and then the target is to start production January 2025,” he said.

Munoz did not say which models the Metaplant will produce, but a new three-row Hyundai EV crossover called the Ioniq 7 is expected to be the first. Munoz also said Hyundai is still examining what models it will export from the new plant.

The project also will see the construction of an adjacent battery plant that will be built through a joint venture with a battery supplier that Hyundai has not identified yet.

A new supply chain also will be established to support the EV factory, Munoz said.

“Most of the things are going to be new because we are going to have this battery EV joint venture as well,” Munoz said. “Some of the suppliers that are already in the state are going to serve the new plant as well, but for the most part, everything will be all new.”

The Metaplant plus the battery plant should put Hyundai in a favorable position to receive federal EV tax credits under the new Inflation Reduction Act.

The fast-evolving EV market has changed since the company first announced its Georgia plans in May. In September, Congress passed the Inflation Reduction Act, which altered the content and sourcing requirements that determine which EV models are eligible for a federal EV tax credit of $7,500.

To receive full credit, the new rules require an EV and its battery to be manufactured in North America, and for a certain percentage of its battery content to be extracted or processed in the U.S. or in a country where the U.S. has a free-trade agreement in effect.

As a result, Hyundai Motor Group’s current EVs are not eligible because they are imported from Korea.

This may hamper some of the momentum and EV market share that Hyundai, Kia and Genesis have been gaining. Their products include the Hyundai Ioniq 5, Kia EV6 and Niro EV and Genesis GV60.

As a group, Hyundai, Kia and Genesis hold the No. 2 slot behind Tesla in terms of EV registrations. Through August, registrations for the South Korean group represented 9 percent of the EV market, according to Experian data.

The three brands plan to bring four new EVs to the U.S. market by the end of next year. That includes the electric version of the popular Genesis GV70 compact crossover, the Electrified GV70, which will begin production at Hyundai’s plant in Montgomery, Ala.

Jarred Pellat, a spokesperson for Genesis, told Automotive News that the luxury brand is targeting a first-quarter 2023 launch for the U.S.-built Electrified GV70. This could be the first Hyundai Motor Group vehicle to qualify for at least a portion of the credit, but Pellat maintains that it’s too soon to tell how much.

In addition to capturing the celebration of Hyundai’s big new investment, Tuesday’s ceremonies also served as a political forum.

Tae-Yong Cho, Korea’s ambassador to the U.S. who spoke at the event, raised the issue of the new EV content law.

“The newly enacted Inflation Reduction Act is an important legislation for the cause of climate change and Korea certainly supports its cause,” Cho said. “However, Korean companies are now at risk for being disadvantaged by the electric vehicle tax credit provision of this act.

“I believe it is not good for the Korea-U.S. partnership or the state of Georgia, and not even for the common cause of climate change, by limiting the consumer choices,” Cho told the audience, which included American politicians.

He added that Korea and the U.S. government recognize these problems and have established an open channel to find a solution.