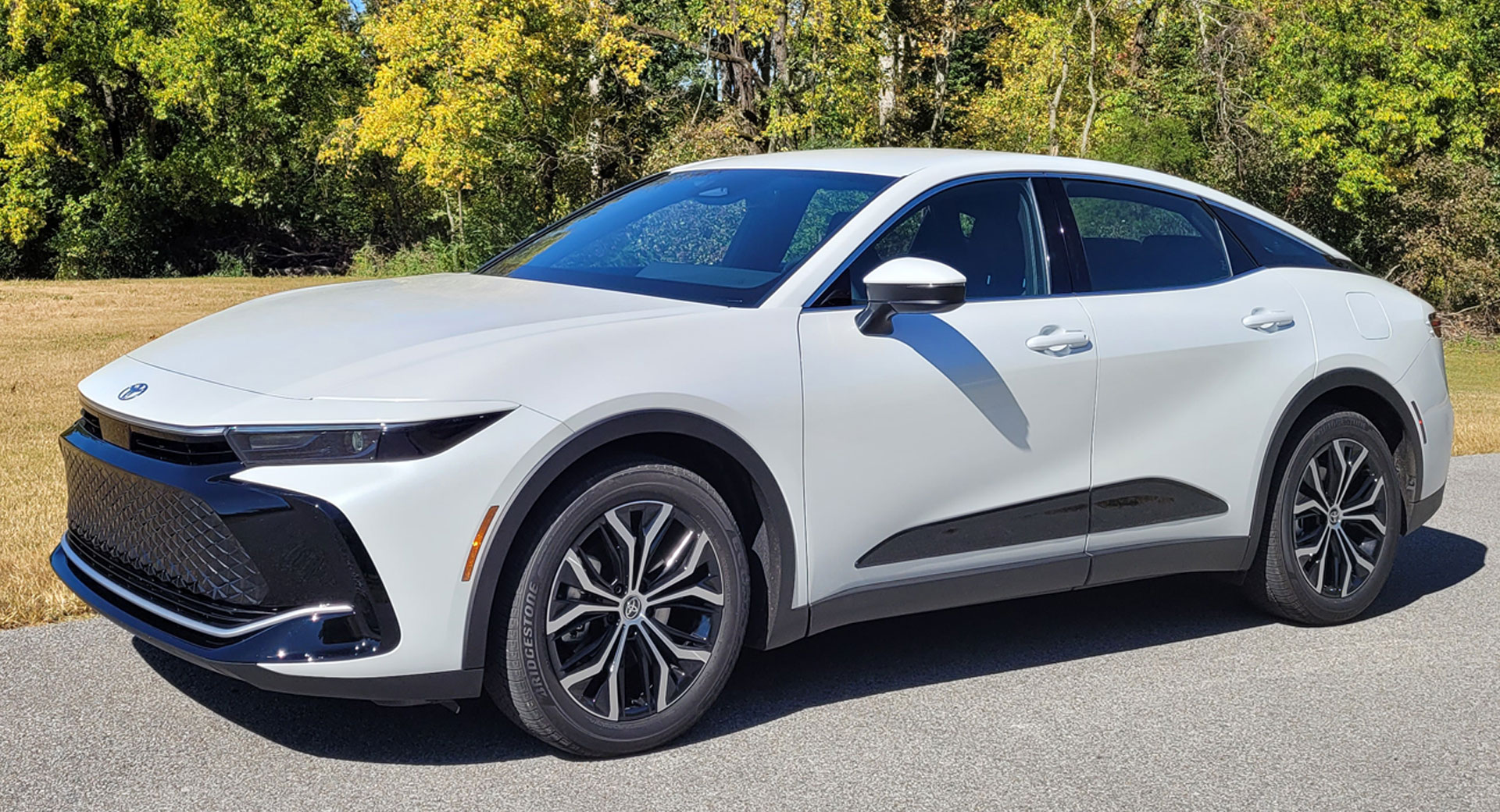 What separates sedans from crossovers, and how important are those differences?

Those are two very important questions as the Toyota Crown is returning to America as an “elevated sedan.” A radical departure from the rear-wheel drive variants offered in Japan, the 2023 Crown is a segment bender that follows in the footsteps of the iconic AMC Eagle.

Toyota is far from the first company to try this as the Volvo S60 Cross Country was introduced nearly a decade ago. It followed a similar formula as the Crown as it was equipped with plastic body cladding, all-wheel drive, and an extra 2.5 inches (65 mm) of ground clearance. However, the 250 hp (186 kW / 253 PS) sedan wasn’t long for this world as it was dropped after a short two-year run.

The Crown is destined to avoid a similar fate as Toyota is committed to sedans and turning them into pseudo crossovers could ensure their survival. Thankfully, this effort isn’t in vain because the Crown brings plenty to the table. 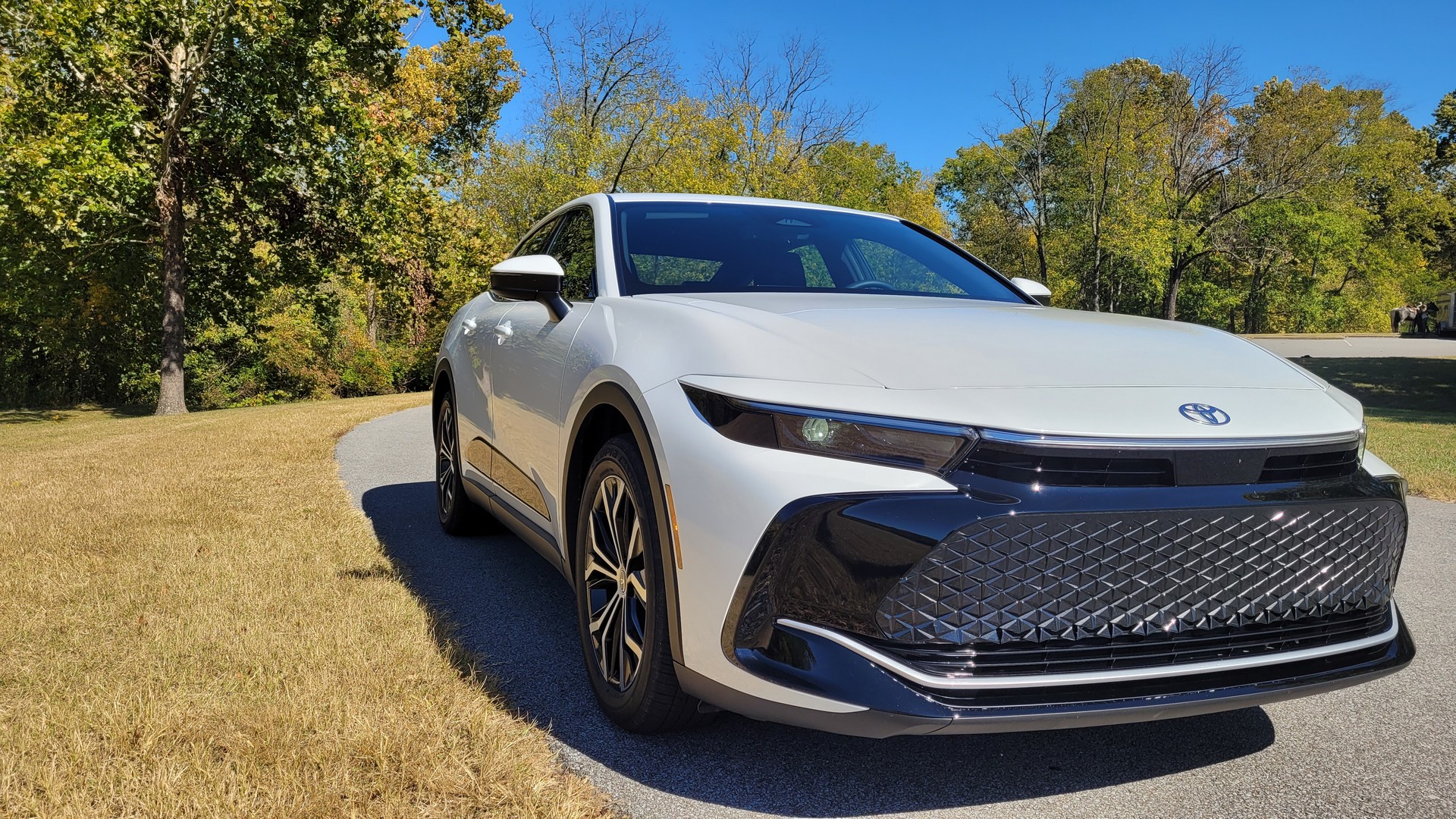 › On Sale: Arrives early next year

Any discussion about the Crown is bound to start with its styling as it features a crossover-inspired design with plastic body cladding and an increased ride height. While the car certainly looks more rugged than the Avalon, the Crown only has 5.8 inches (147 mm) of ground clearance and that’s a mere 0.5 inches (13 mm) more than the outgoing sedan.

Since that isn’t much of a difference, designers focused on raising the car visually. As part of this effort, the Crown is 4.1 inches (104 mm) taller than its predecessor and this increase is amplified by the 19- or 21-inch wheels.

Unfortunately, the design makes the model look ungainly from certain angles. The Platinum’s available two-tone paint job doesn’t do it any favors either as the four primary colors clash with a black hood and a matching rear end.

However, there’s beauty to be had in the flowing bodywork. The grille is also a significant improvement over the Avalon’s gaping mouth, although it’s largely blocked off.

A Spacious And Well-Equipped Cabin 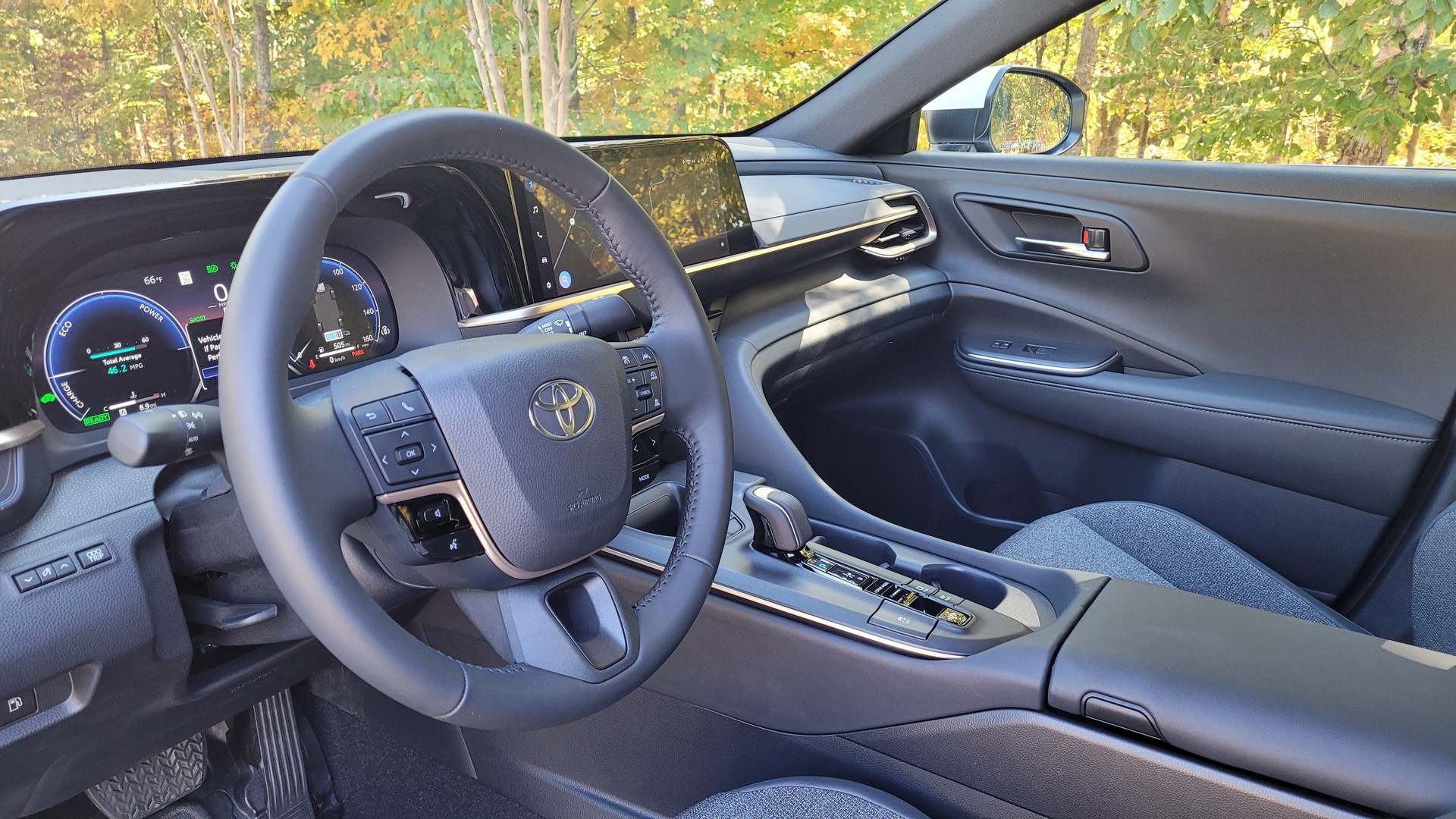 The unconventional exterior gives way to a straight forward and slightly dull cabin, which is thankfully spacious and well-equipped.

The interior has a business-like feel and that’s amplified by the XLE’s eight-way power front seats, which feature fabric that looks more at home in a 1980’s office. While the upholstery gives off a retro vibe, the seats offer a nice balance of comfort and support while also coming standard with three-level heating.

Elsewhere, drivers will find a 12.3-inch digital instrument cluster and a matching 12.3-inch Toyota Audio Multimedia system. The latter is notable for featuring over-the-air updates, cloud-based navigation, integrated Apple Music and Amazon Music streaming, and an Intelligent Assistant that responds to the “Hey, Toyota” wake word. It’s a huge improvement over the Avalon’s 9-inch infotainment system, although you’ll need to sign up for an assortment of subscriptions to get the most out of it. 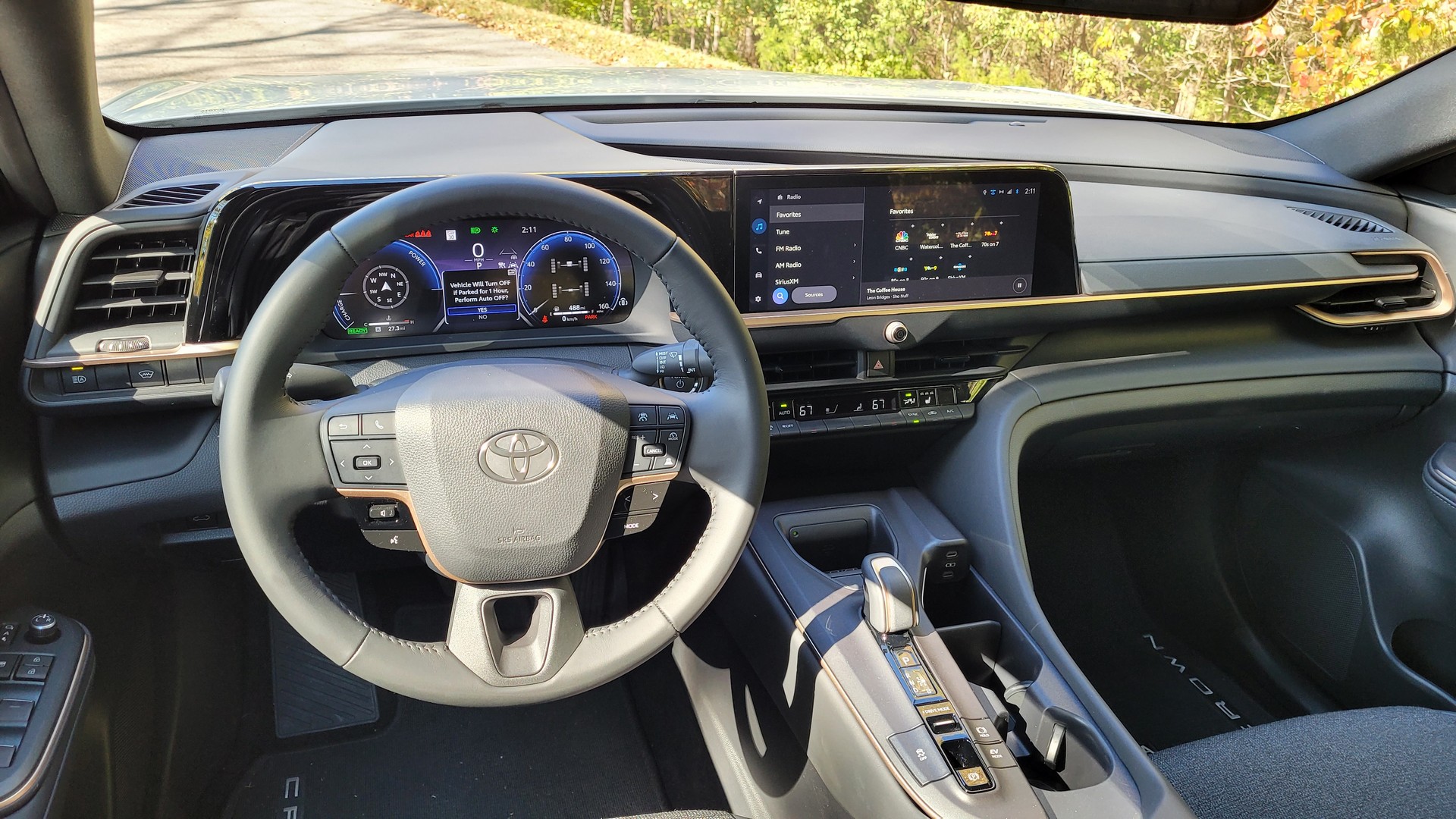 Speaking of equipment, the entry-level XLE features a dual-zone automatic climate control system, a six-speaker audio system, and an auto-dimming rearview mirror with HomeLink. They’re joined by a wireless smartphone charger and acoustic glass, which helps to keep the cabin hushed.

Regardless of which trim is selected, all Crowns have a spacious cabin with plenty of head- and legroom up front. It’s also worth noting the increased ride height helps to improve entry and egress, which is part of the reason older Americans have been trading their sedans for crossovers. 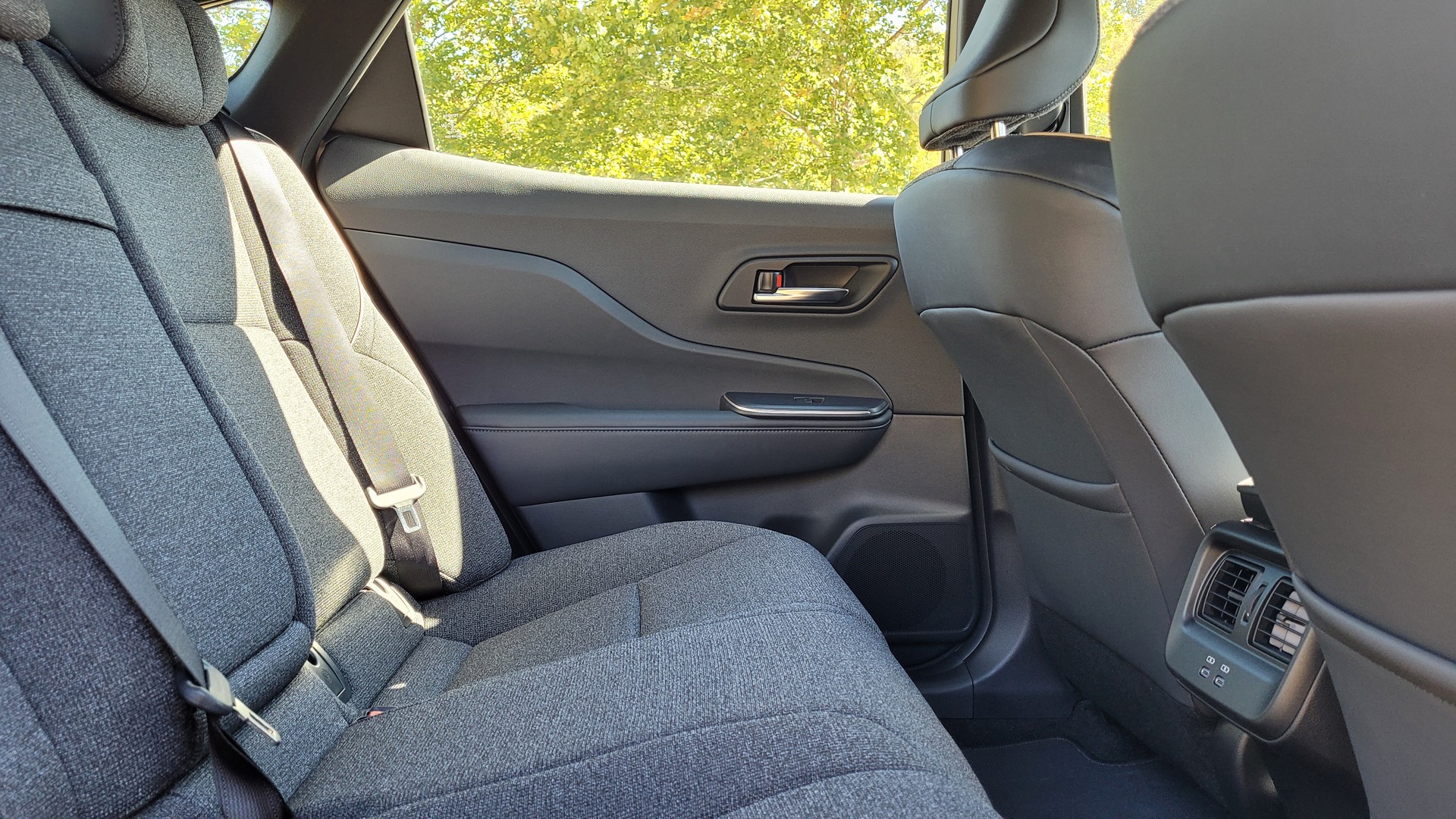 Rear passengers don’t take a backseat in terms of comfort as there’s 38.9 inches (988 mm) of legroom. While that’s 1.4 inches (36 mm) less than the Avalon, there’s plenty of room to sit back and relax. Headroom is also generous and this 6’ 2” scribe didn’t have any problems getting comfortable.

On the topic of space, the Crown sports a sizable trunk that holds 15.2 cubic feet (430 liters) of luggage. That’s slightly less than the Avalon, but owners can pull on two handles to lower the rear seats for hauling longer items.

While the cabin is comfortable and spacious, it feels a little lackluster and plasticky. The door panels are on the hard side and largely devoid of padding, which is disappointing for a sedan that starts at $39,950.  The cabin also lacks visual interest as there isn’t much decoration aside from the occasional splash of bronze or silver trim. 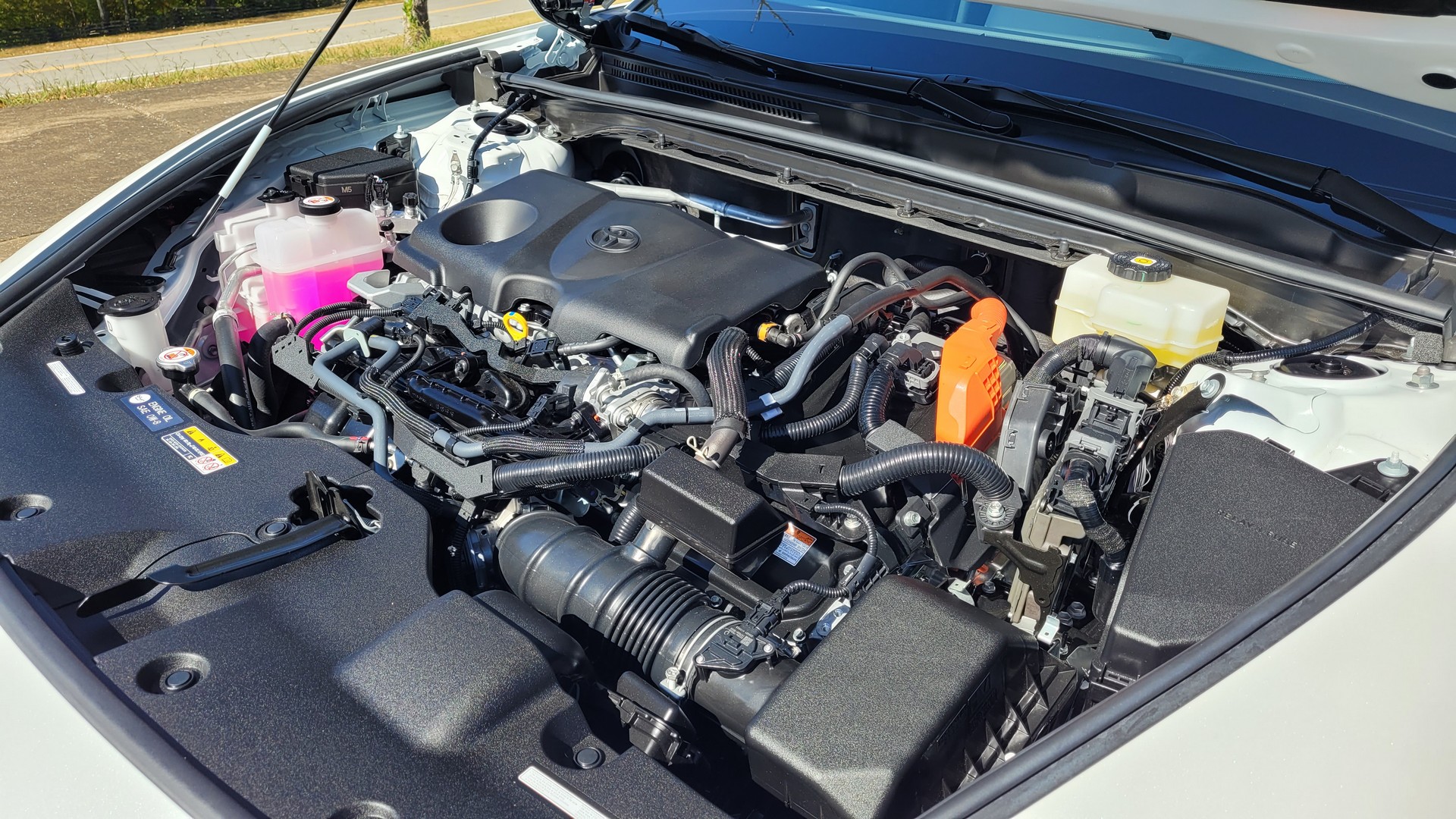 A number of Toyota vehicles have gone hybrid-only and the Crown is the latest member of that group. However, there are two different powertrains including an all-new Hybrid Max option.

The XLE and Limited come equipped with a hybrid powertrain that consists of a 2.5-liter four-cylinder engine, two electric motors, a bipolar nickel-metal hydride battery, and an electronically controlled continuously variable transmission. 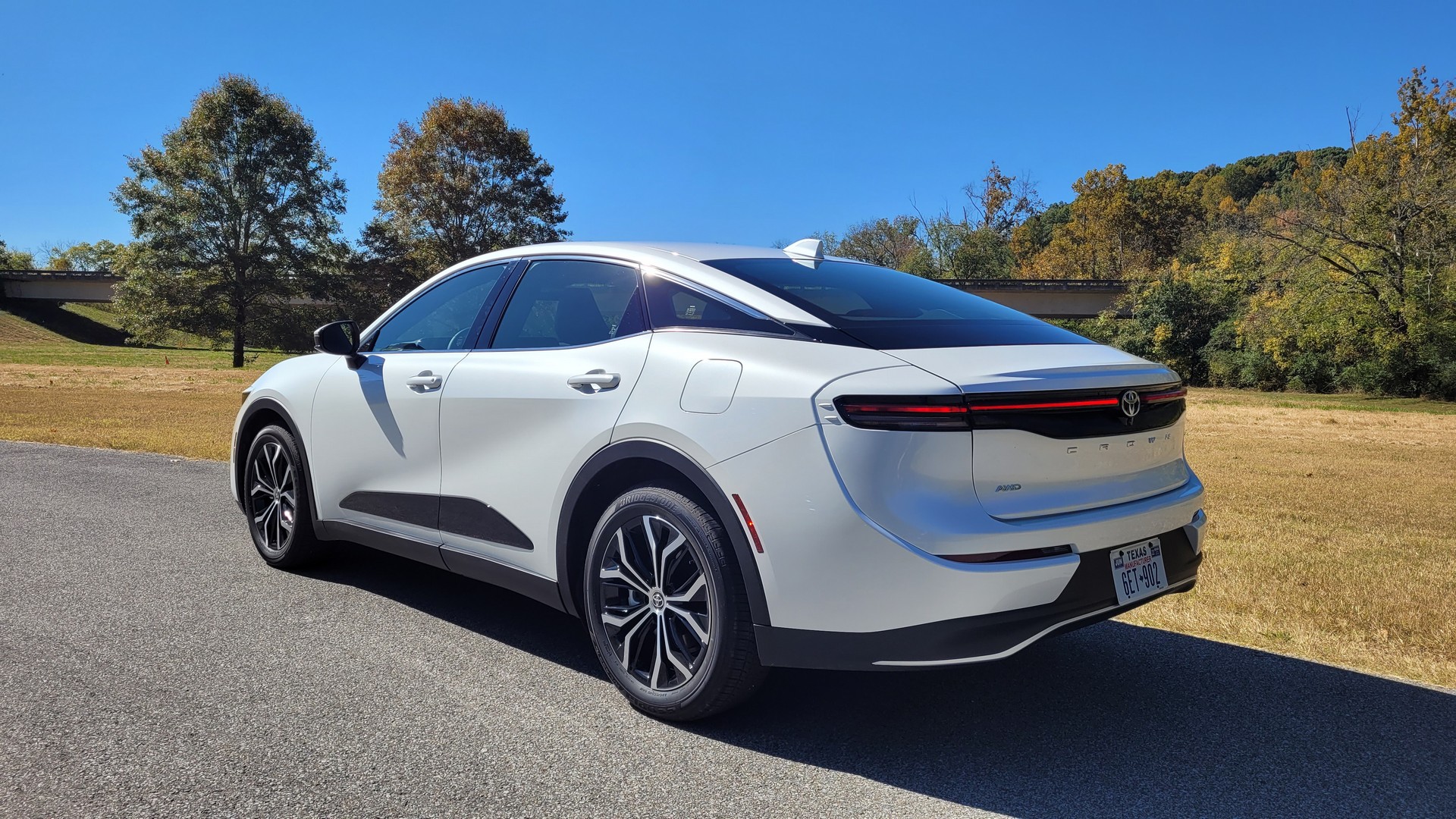 Given numbers like that, it’s not surprising the dash from 0-60 mph (0-96 km/h) takes 7.6 seconds. That’s respectable and the model feels relatively quick off the line for something weighing 4,250 pounds (1,928 kg). Things then settle down into a more leisurely pace, which seems fitting for the car.

Besides the hybrid powertrain, the Crown XLE and Limited are equipped with an electronic on-demand all-wheel drive system. It features a rear-mounted electric motor, which powers the rear wheels as needed. This is done seamlessly and it helps to provide all-weather traction as well as improved performance. Speaking of the latter, the front to rear power distribution ranges from 100:0 to 20:80. 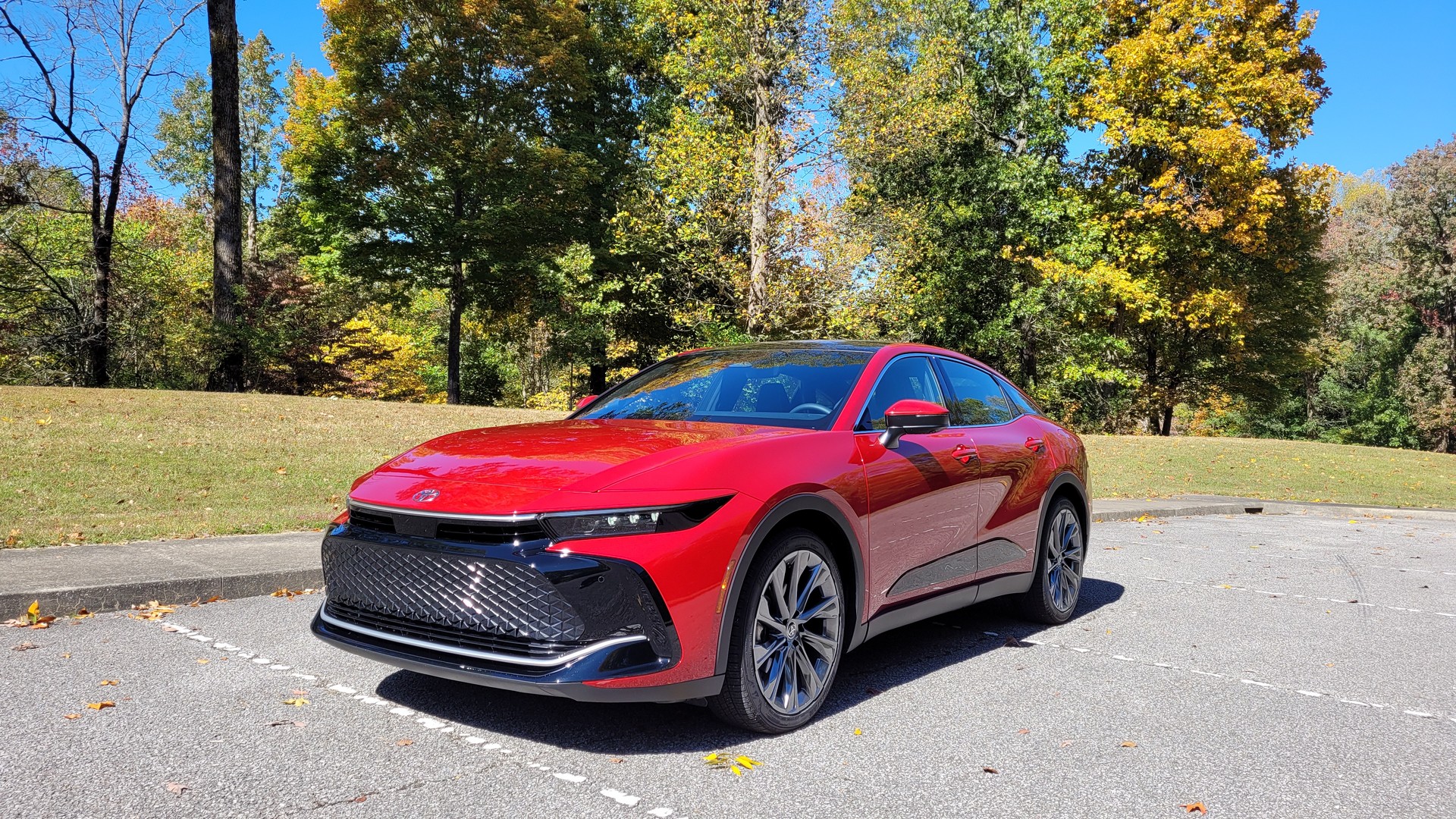 Buyers with a need for speed can opt for the Crown Platinum, which is notable for featuring an all-new Hybrid Max powertrain. It has a far more powerful turbocharged 2.4-liter four-cylinder engine, a front electric motor that helps to maximize torque production, and a rear eAxle. The powertrain also swaps out the CVT for a six-speed automatic with a multi-plate wet start clutch.

Our time with the Crown Platinum was brief, but the extra power makes itself known as launches are far more satisfying and the car feels more responsive throughout the range. The Hybrid Max powertrain also sounds better and is the one to get if your budget allows. 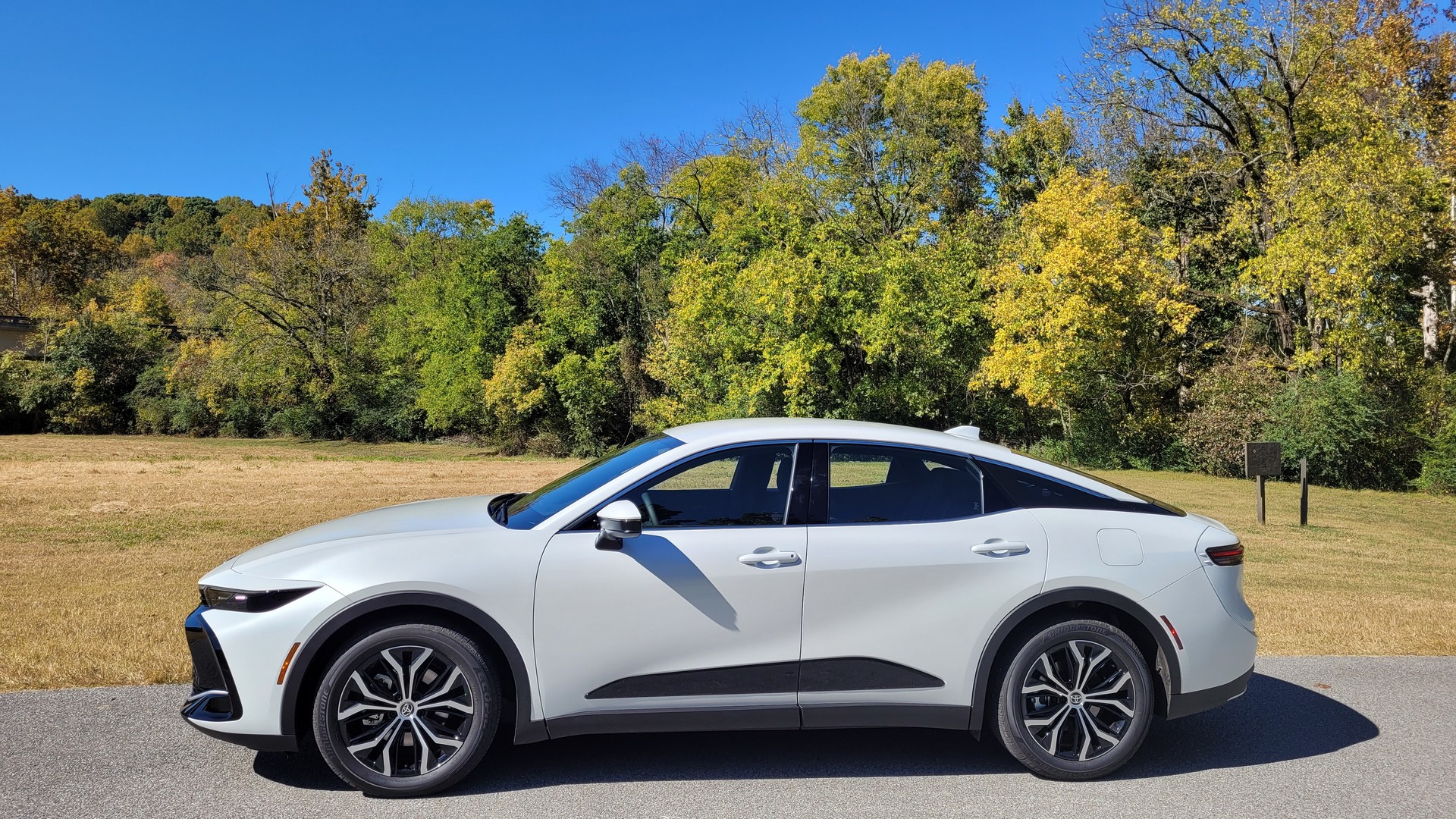 Price isn’t the only tradeoff as the fuel economy rating takes a major hit. While the numbers haven’t been finalized, Toyota expects the Crown Platinum to return 29 mpg city, 32 mpg highway, and 30 mpg combined.

Besides being more powerful, the Crown Platinum has a more advanced all-wheel drive system that always sends power to the rear wheels. The front to rear split varies from 70:30 to 20:80, and this helps to improve responsiveness as well as driving dynamics.

A Comfortable And Capable Cruiser 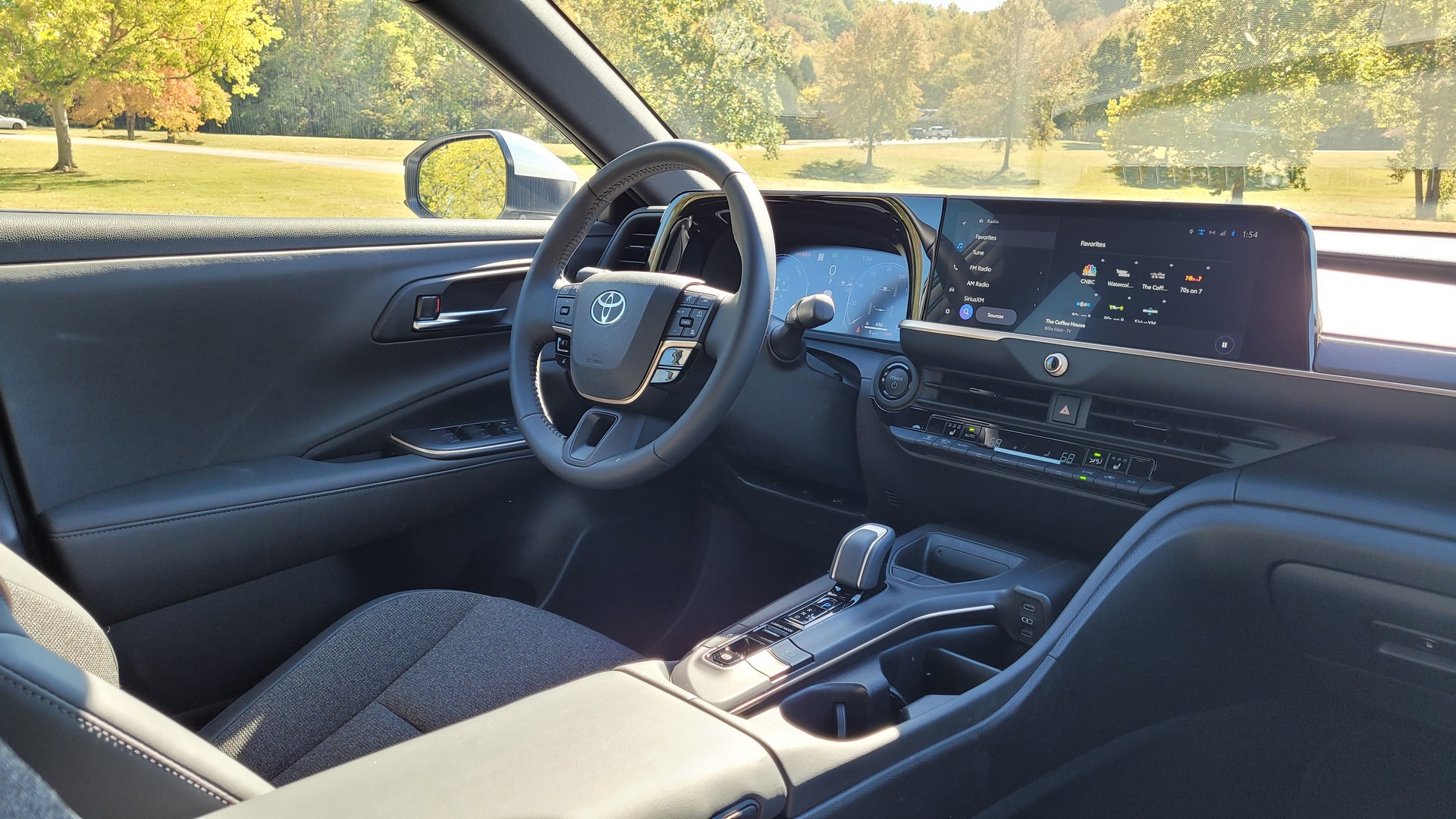 The Crown rides on the TNGA-K platform, which also underpinned the old Avalon. It’s a solid architecture and it can be impressive with the right tuning.

Like the Avalon, comfort takes priority as the MacPherson strut front and multi-link rear suspension soak up road imperfections with ease. This makes the Crown a comfortable highway cruiser that also feels at home around town.

That isn’t much of a surprise, but the Crown feels sportier than its predecessor and seems to build on the driving experience that was offered in the old Avalon TRD. Given the right stretch of road, the car impresses with relatively sharp reflexes and all-wheel drive systems that send power rearward. The ride also feels firmer than in the Avalon and that’s a welcome change.

Cornering is relatively flat, but if you push things too far, the Crown’s weight and height make themselves known. That being said, the model has active cornering assist, which engages the stability control system to reduce understeer in certain situations. 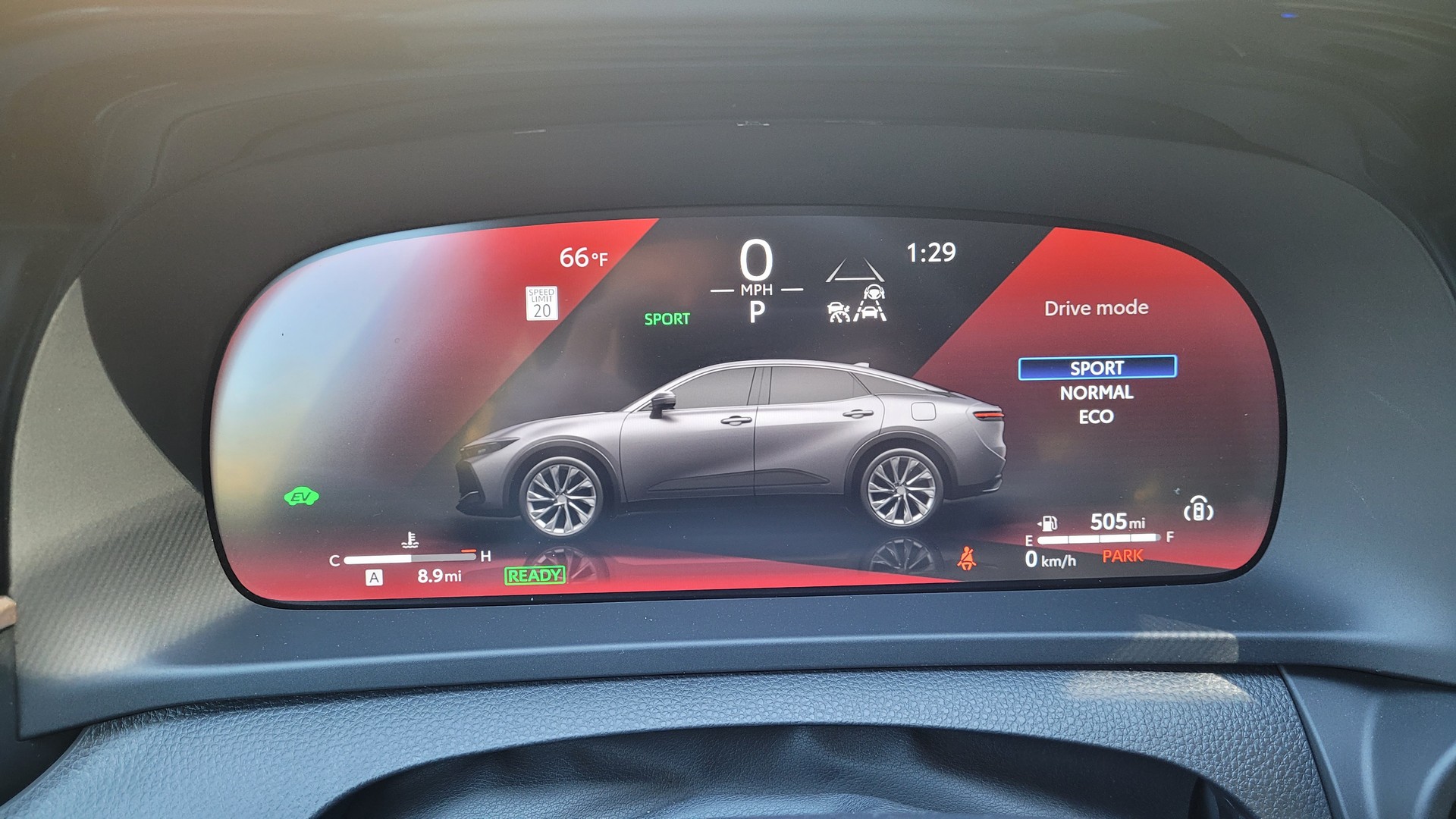 XLE and Limited trims have Eco, Normal, and Sport driving modes with profound differences between them. Sport mode is the clear stand out as it sharpens throttle response and adds heft to the steering.

The performance-oriented Platinum goes the extra mile with additional modes known as Comfort, Sport+, and Custom. The latter allows customers to adjust individual settings for a driving experience that is tailored to their liking.

Furthermore, the Platinum comes standard with an adaptive variable suspension that helps to minimize pitch and body roll. The range-topper also has thicker stabilizer bars including a rear one that is solid instead of hollow.

When it comes time to stop, drivers will be thankful for a capable braking system with discs measuring 12.9 inches (328 mm) front and 12.5 inches (318 mm) rear. Besides having larger discs than the old Avalon Hybrid, the braking system has a linear and predictable response. 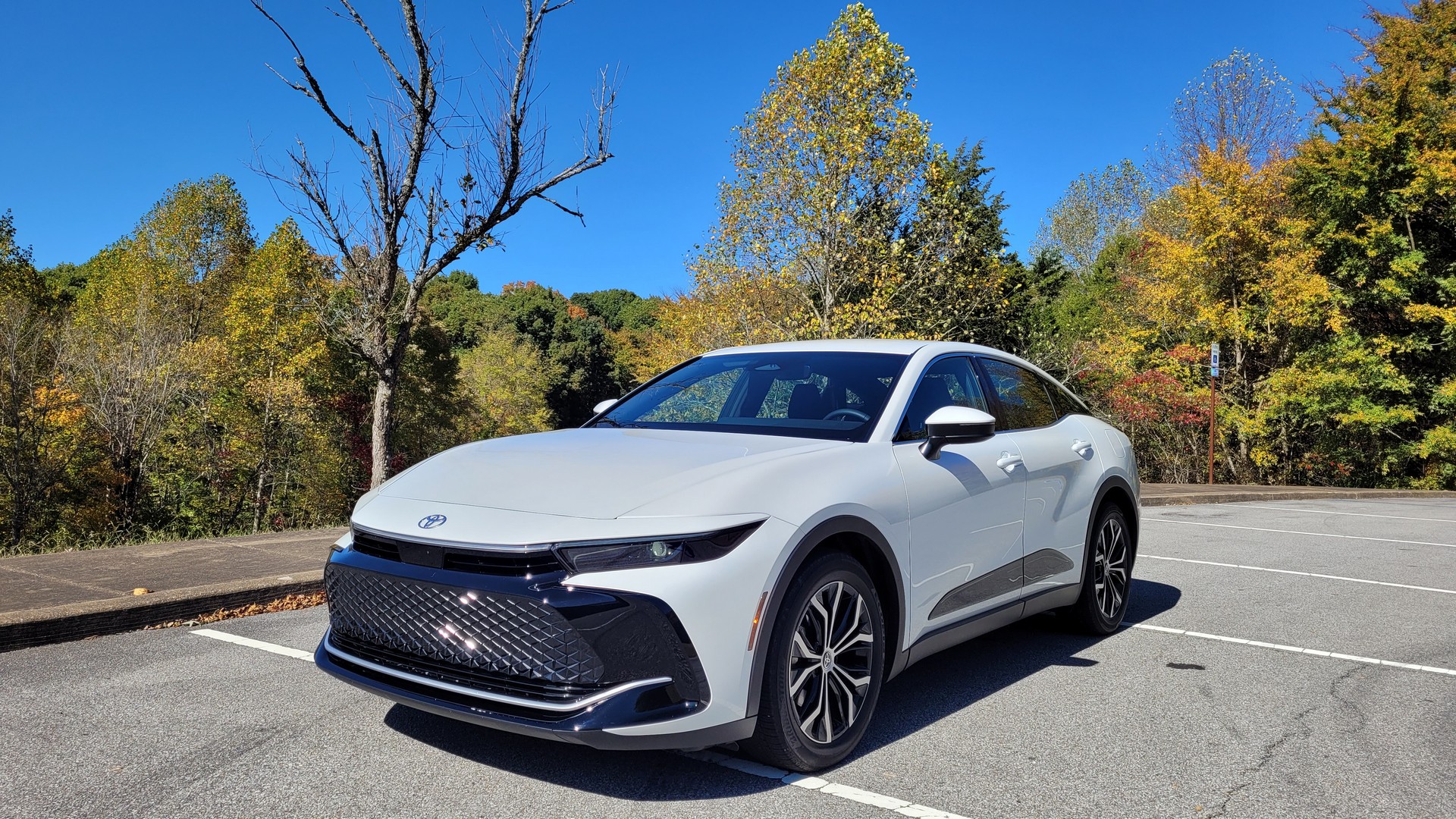 The Toyota Crown arrives at an interesting time as the full-size sedan segment is effectively dead. The Chevrolet Impala and Ford Taurus are long gone, while the Chrysler 300 and Nissan Maxima will be making their exits shortly. 2023 also marks the end of the current Dodge Charger and this effectively leaves the Crown in a segment by itself.

That being said, the smaller Kia Stinger and Volkswagen Arteon continue clinging to life, competing with the Crown on price. Speaking of which, the model starts at $39,950 and that’s only $2,100 more than the old Avalon Hybrid. That makes it a good value considering it’s more powerful, better equipped, and comes standard with all-wheel drive.

However, the $52,350 Crown Platinum is a questionable proposition, especially when you can get a faster and more powerful Cadillac CT5-V for $50,995 or $52,995 with all-wheel drive. It’s also impossible to ignore the Lexus ES, which offers hybrid and all-wheel drive options for less. 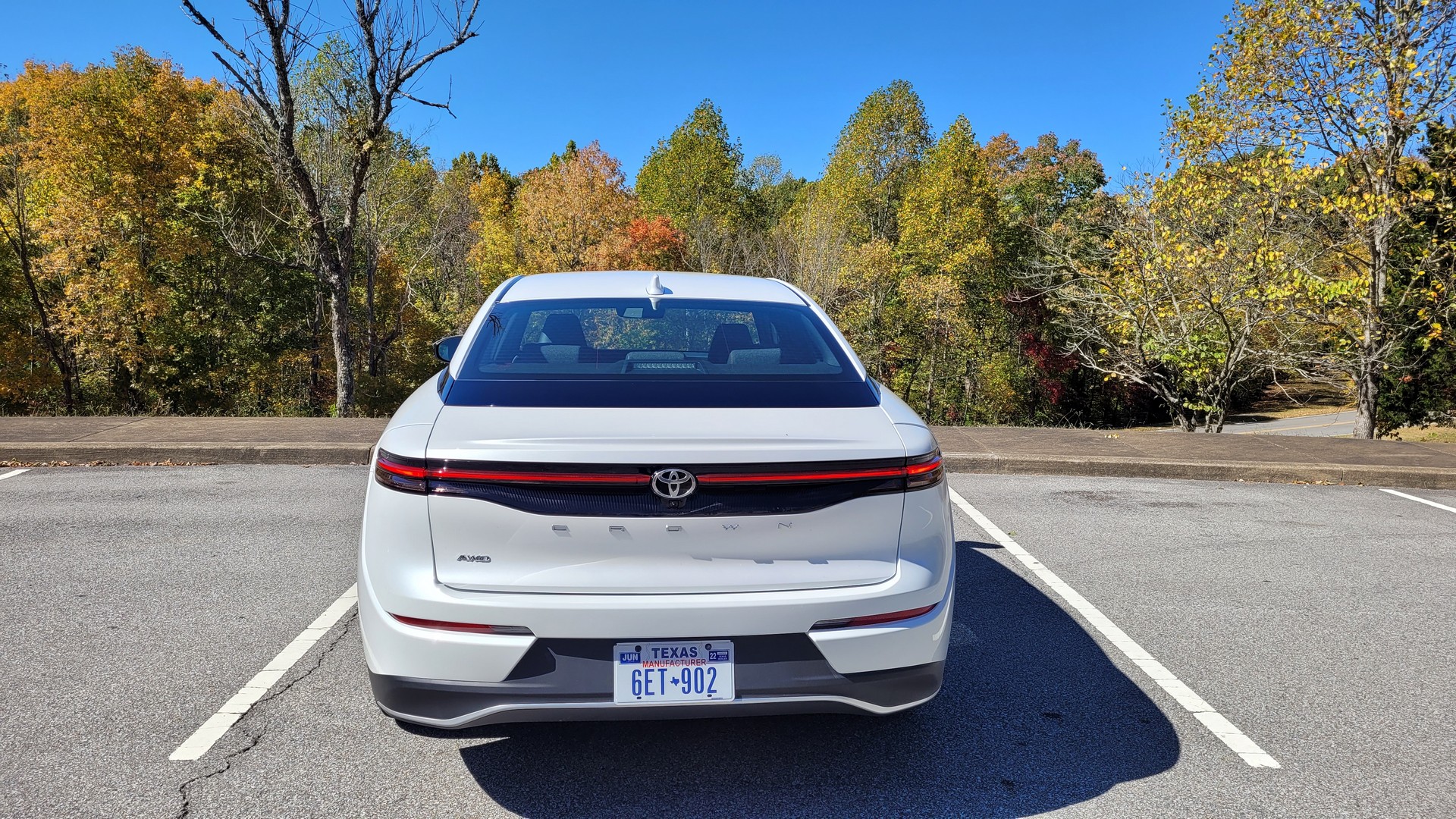 As a result, the Crown doesn’t just blur the line between crossover and sedan, but it does the same with mainstream and luxury segments. This leaves the car in a grey area and we’re a little conflicted about it.

That being said, the Crown is comfortable, spacious, and well-equipped. The elevated sedan also drives better than expected, posts good fuel-economy figures, and features a standard hybrid powertrain that feels well-suited for the car. Customers can also upgrade to a Hybrid Max powertrain, which adds performance as well as a more advanced all-wheel drive system.

At the end of the day, the Toyota Crown isn’t for everyone, but those that like it will find a lot to love.