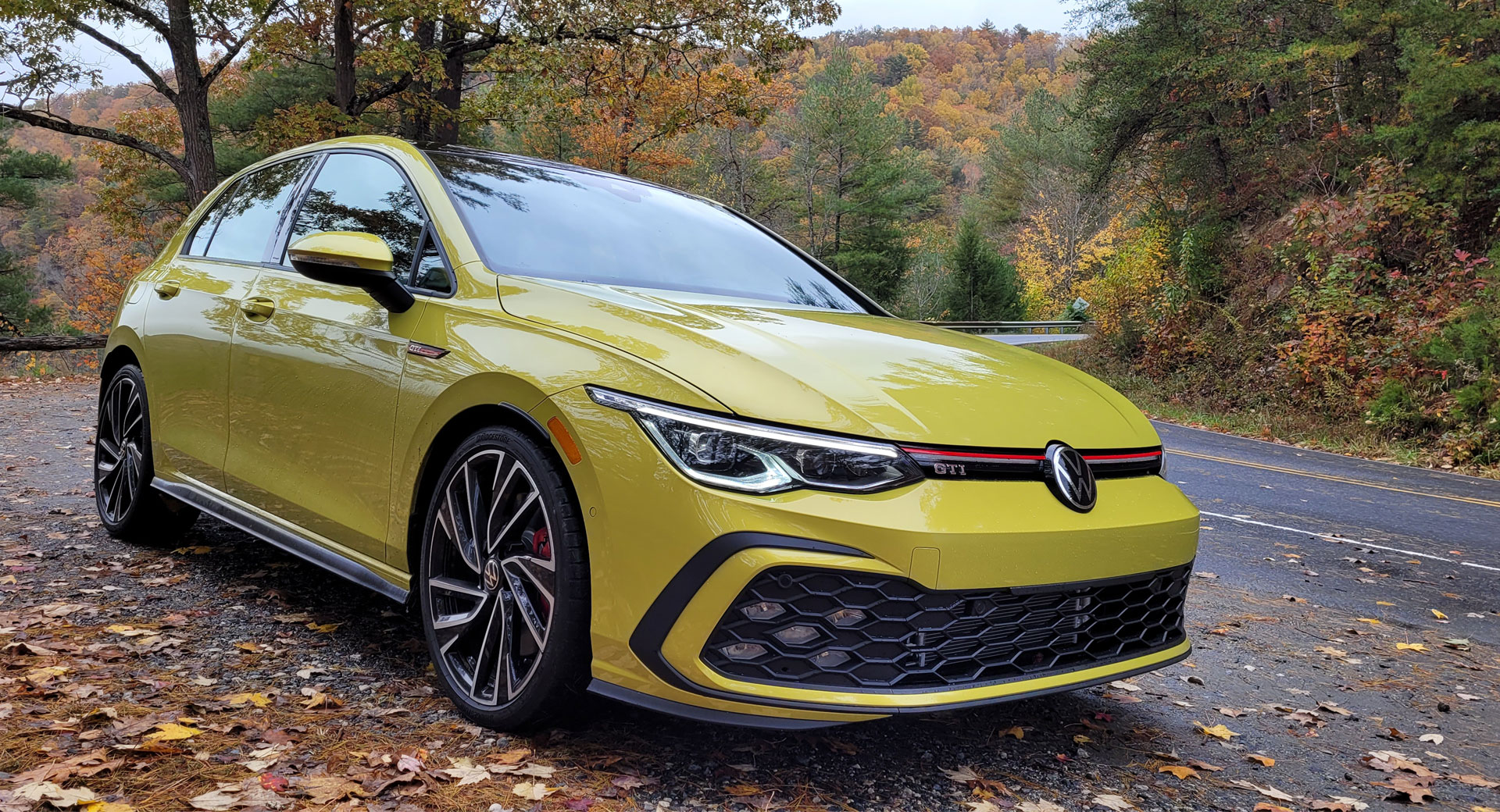 Hatchbacks have enjoyed success in other parts of the world, such as Europe, but they’ve never really caught on in America.

This has resulted in a number of deaths over the years as we’ve already seen the elimination of the Chevrolet Cruze and Ford Focus. The latest hatchback to join them in the automotive afterlife is the standard Volkswagen Golf, which has been discontinued for 2022. However, it’s not all bad news as the model lives on in the form of the redesigned Golf GTI and Golf R.

We’ve already had a few experiences with international versions of the Golf Mk8, but we recently traveled to North Carolina to be among the first to drive the US-spec models. Our time with them was brief, but hot hatch fans have plenty to look forward to. 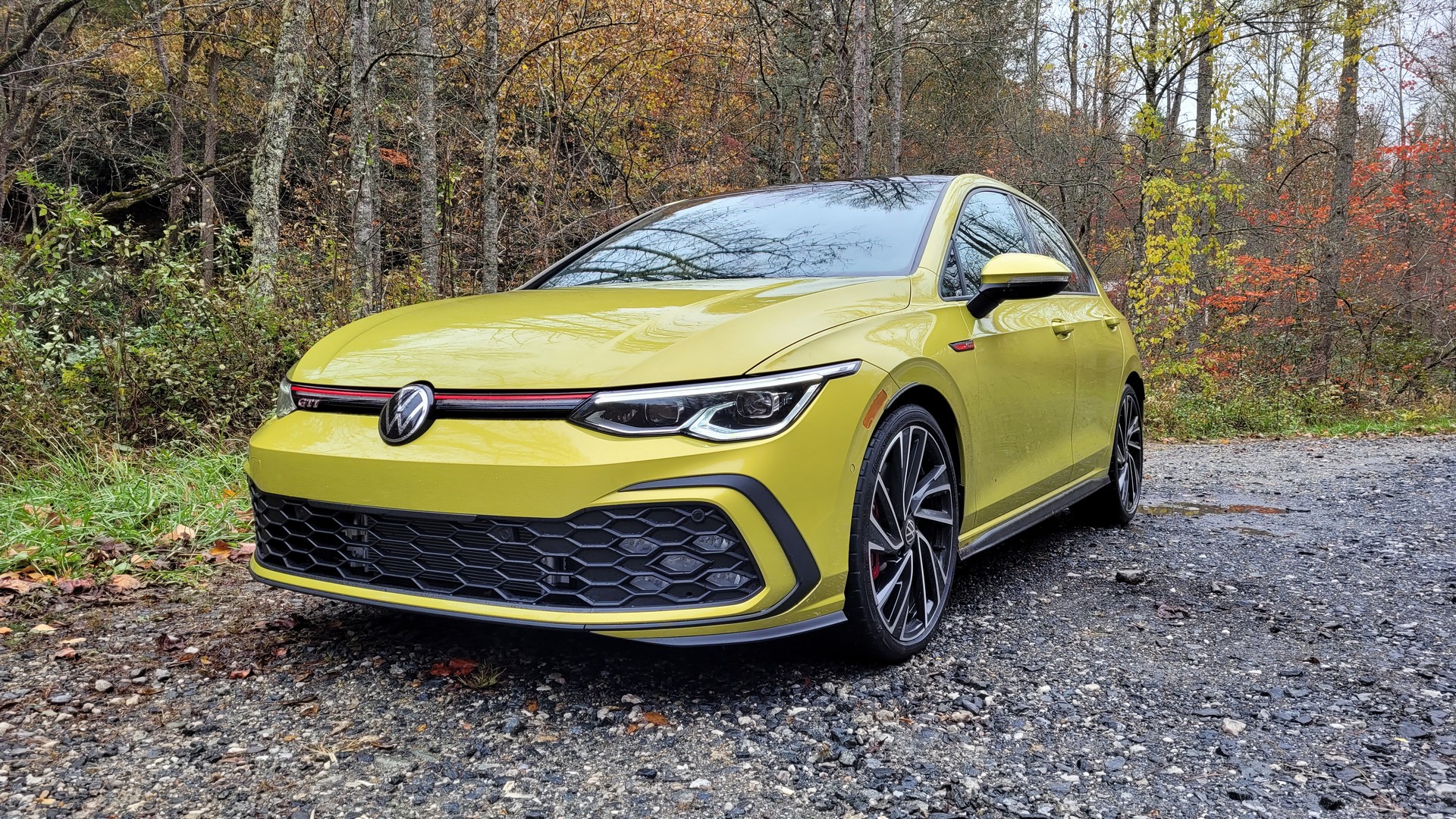 The cars should be a familiar sight to our readers as the Golf GTI was introduced in February of 2020, while the Golf R followed in November of that same year. Unsurprisingly, the US-spec models are virtually identical to their European counterparts and feature a sleeker design than their predecessors.

Starting with the GTI, the model sports a more expressive front fascia with new LED headlights that are connected by a familiar red strip. That classic accent is now joined by an illuminated light bar, which comes standard on the mid-level GTI SE. It’s an eye-catching addition and helps the model to stand out at night.

Those aren’t the only notable changes as the GTI adopts distinctive fog lights that form an X-shape. They’re joined by a minimalist front splitter, a black diffuser and a rear spoiler. Rounding out the highlights are a chromed dual exhaust system and 18- or 19-inch wheels that are backed up by a beefy braking system with red calipers. 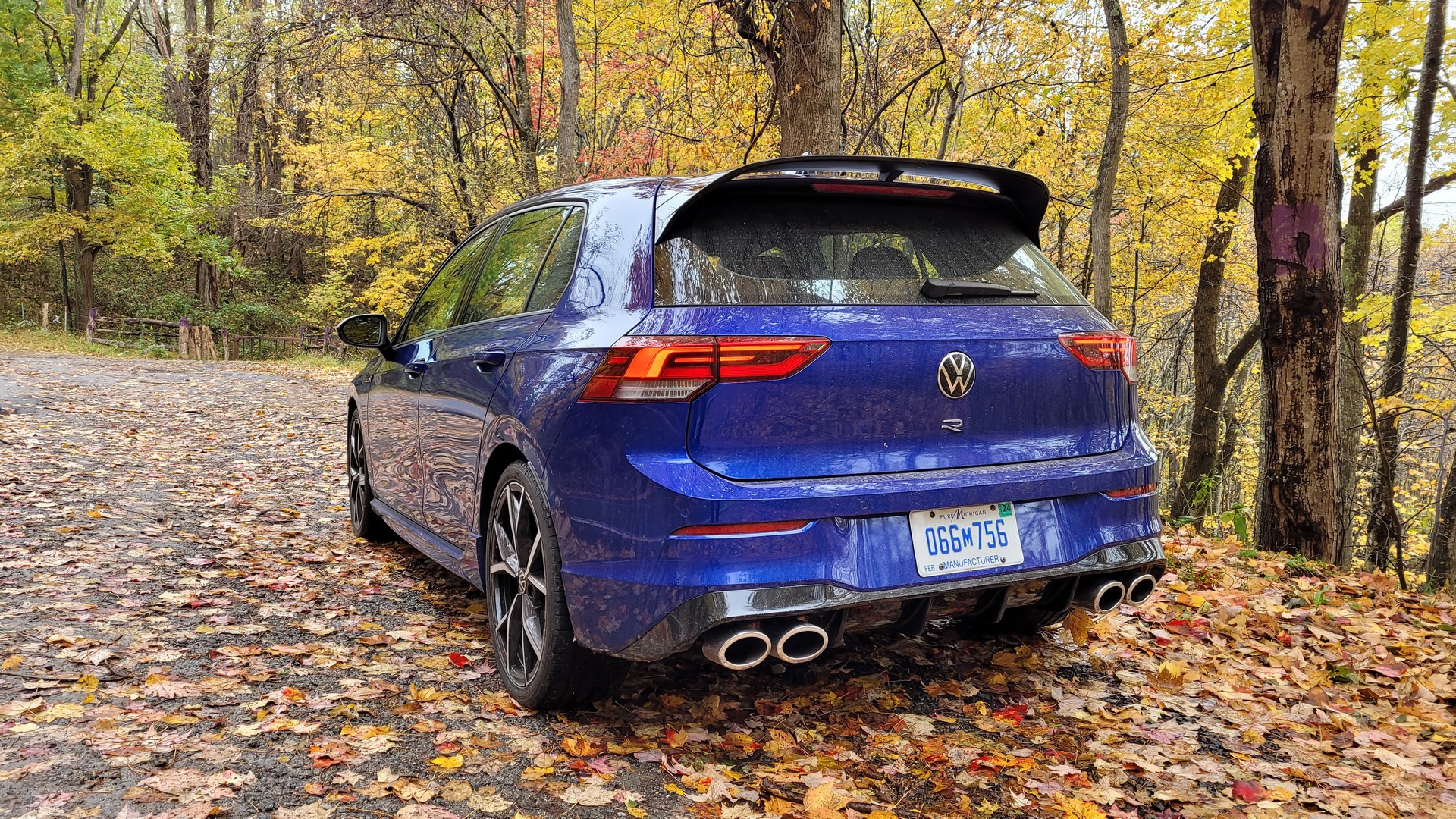 The Golf R builds on that formula and is “more R than ever.” As a result, the high-performance model is distinguished by a unique front bumper that helps to improve airflow while also increasing downforce. Buyers will also find extended side skirts and stylish 19-inch alloy wheels with black accents.

Rounding out the highlights are matte aluminum-look mirror caps, blue accents and a two-piece rear spoiler. They’re joined by a more aggressive diffuser and a four-tailpipe exhaust system. It’s also worth mentioning the Golf R is available exclusively in three colors – Lapiz Blue Metallic, Deep Black Pearl and Pure White – whereas the Golf GTI has a more expressive palette with vibrant hues such as Kings Red Metallic and Pomelo Yellow Metallic.

A Minimalist Cabin, For Better Or Worse 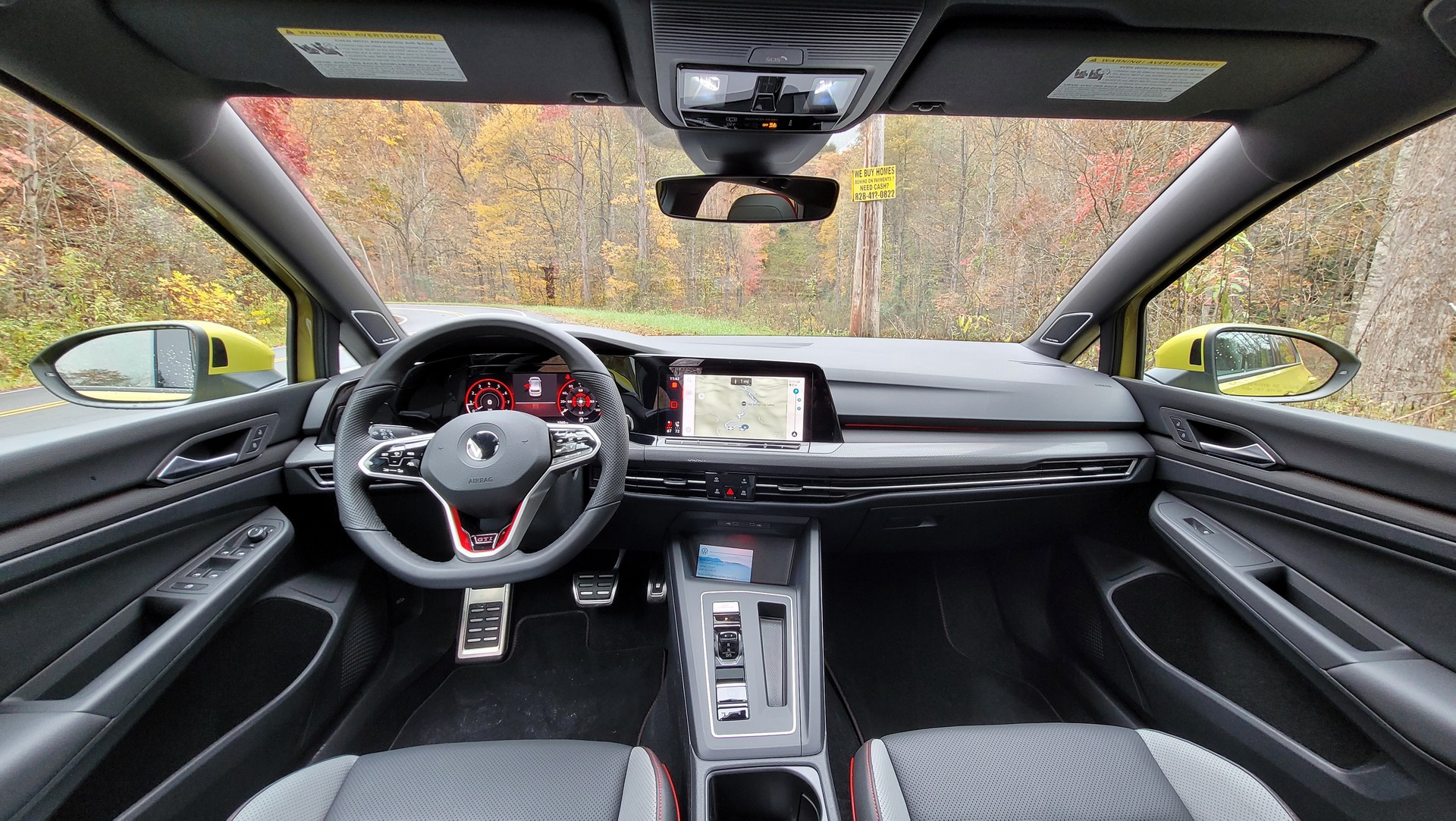 While the exterior is evolutionary, the cabin is far more modern and high-tech than its predecessor. Both models come equipped with a 10.25-inch digital instrument cluster, which features high quality graphics as well as an assortment of customization options.

The cluster is joined by a freestanding 10-inch infotainment system on everything except for the entry-level GTI S, which sports a smaller 8.25-inch display. It seems reasonably fast and responsive, but there’s no button for pulling up media controls.

This is an odd oversight as people change radio stations far more often than climate settings, which can be accessed by a dedicated button on the minimalist center stack, sleek touch controls on the dashboard, and a dedicated section on the infotainment system itself. It’s a strange omission, but the entire cabin has been streamlined and this has greatly reduced the number of physical buttons and switches. 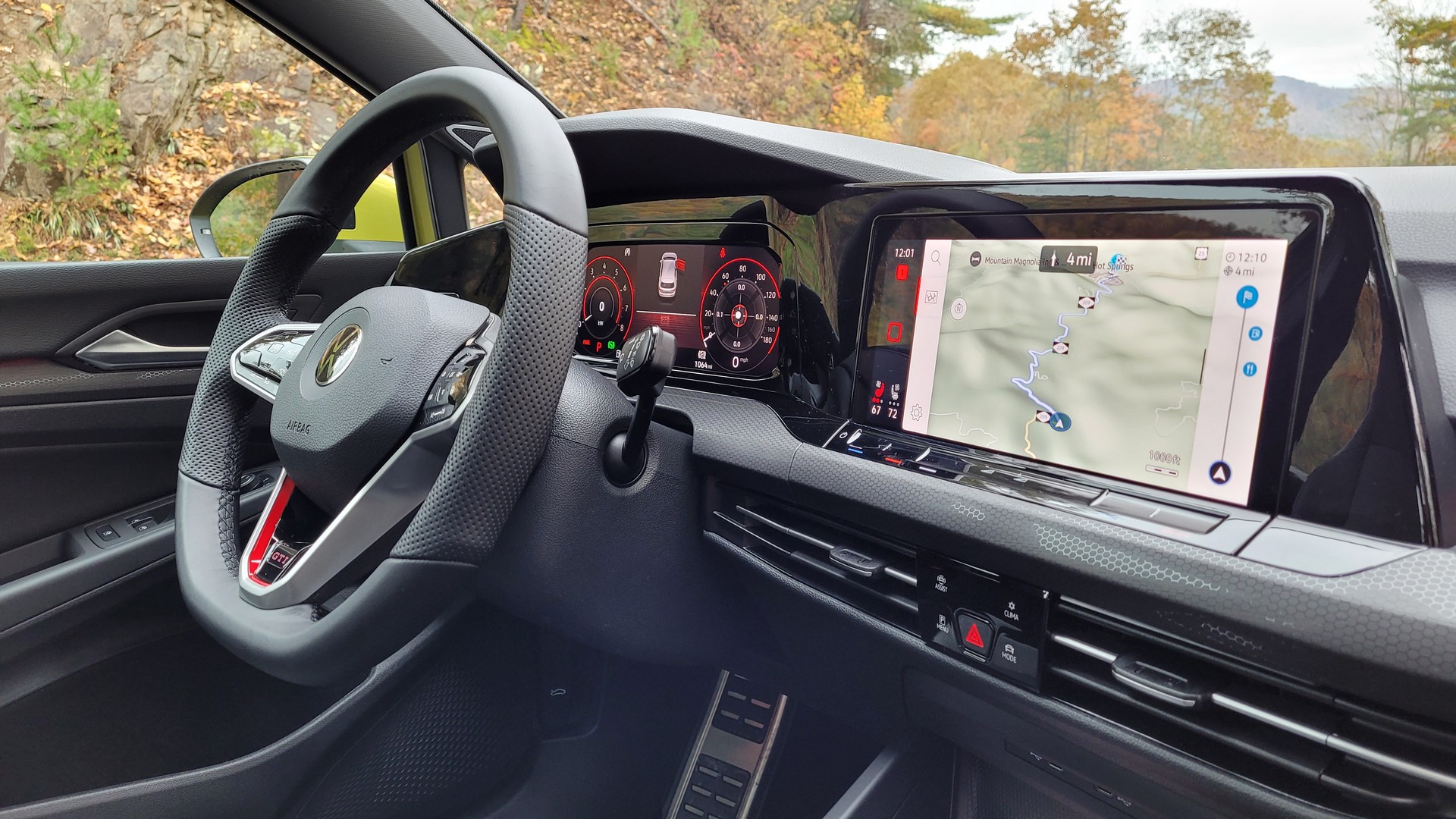 Sticking with equipment, the Golf R is offered exclusively in Autobahn trim. It largely echoes the GTI variant, but the cabin is distinguished by R logos, carbon-effect trim and blue accents. 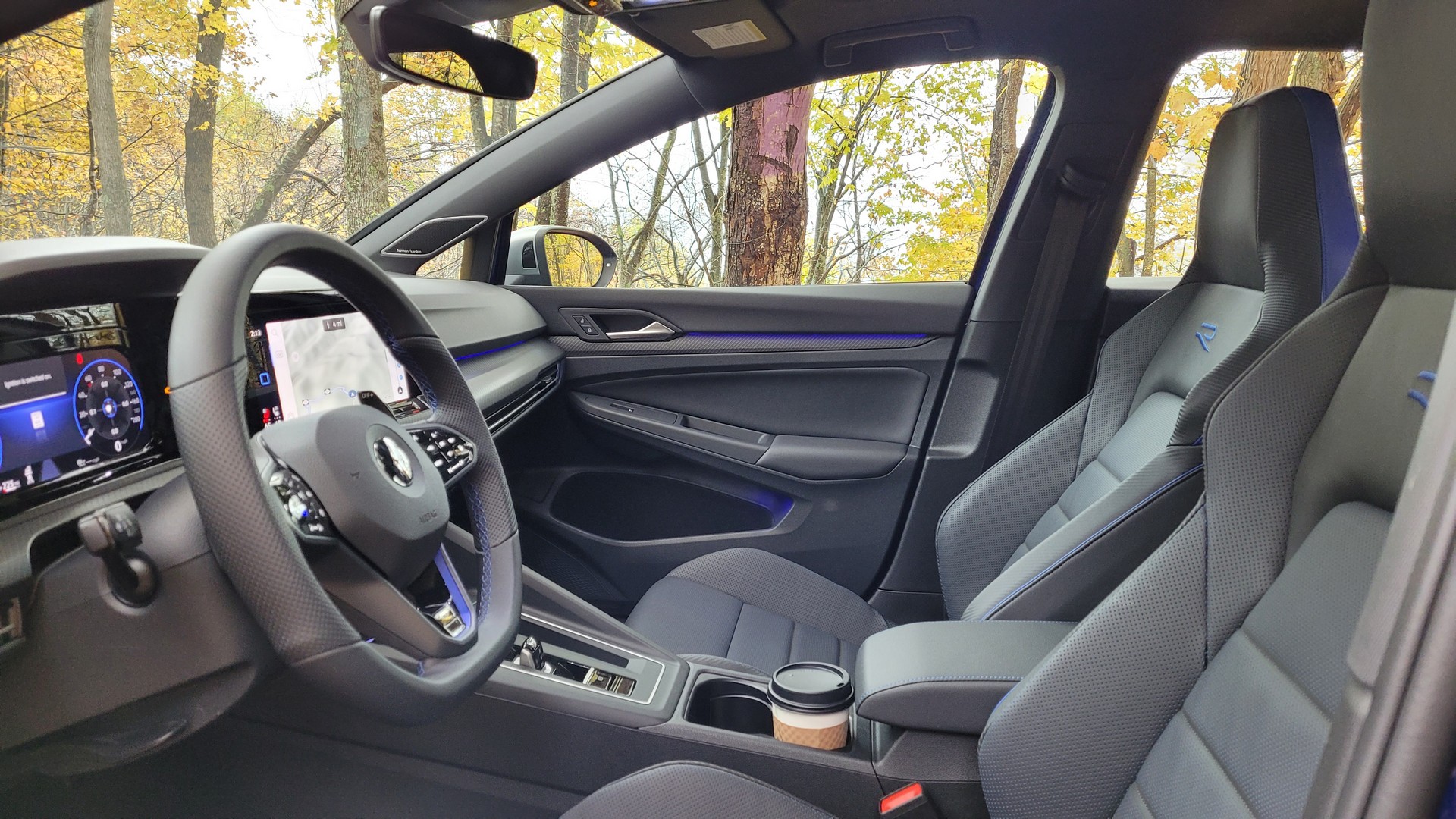 While the interior looks good and boasts a handful of upscale features, it doesn’t exactly feel premium as there are hard plastics at various touchpoints such as the doors. This is disappointing for a car that starts at $29,545 and climbs to $44,445 for a DSG-equipped Golf R.

On the bright side, the front sport seats are fantastic in both models as their heavy bolstering kept us in place on twisty mountain roads. The front seats are also spacious, while the rear ones are reasonably accommodating as they offer 35 inches (889 mm) of legroom and enough headroom to keep this 6’ 2” scribe happy.

As for cargo space, the latest Golfs offer 19.9 cubic feet (564 liters) of luggage room. That’s slightly less than the Mazda3 2.5 Turbo, but the cargo area can be expanded to 34.5 cubic feet (977 liters) by folding the rear seats down.

Turbocharged 2.0-Liter Four-Cylinders With Up To 315 HP 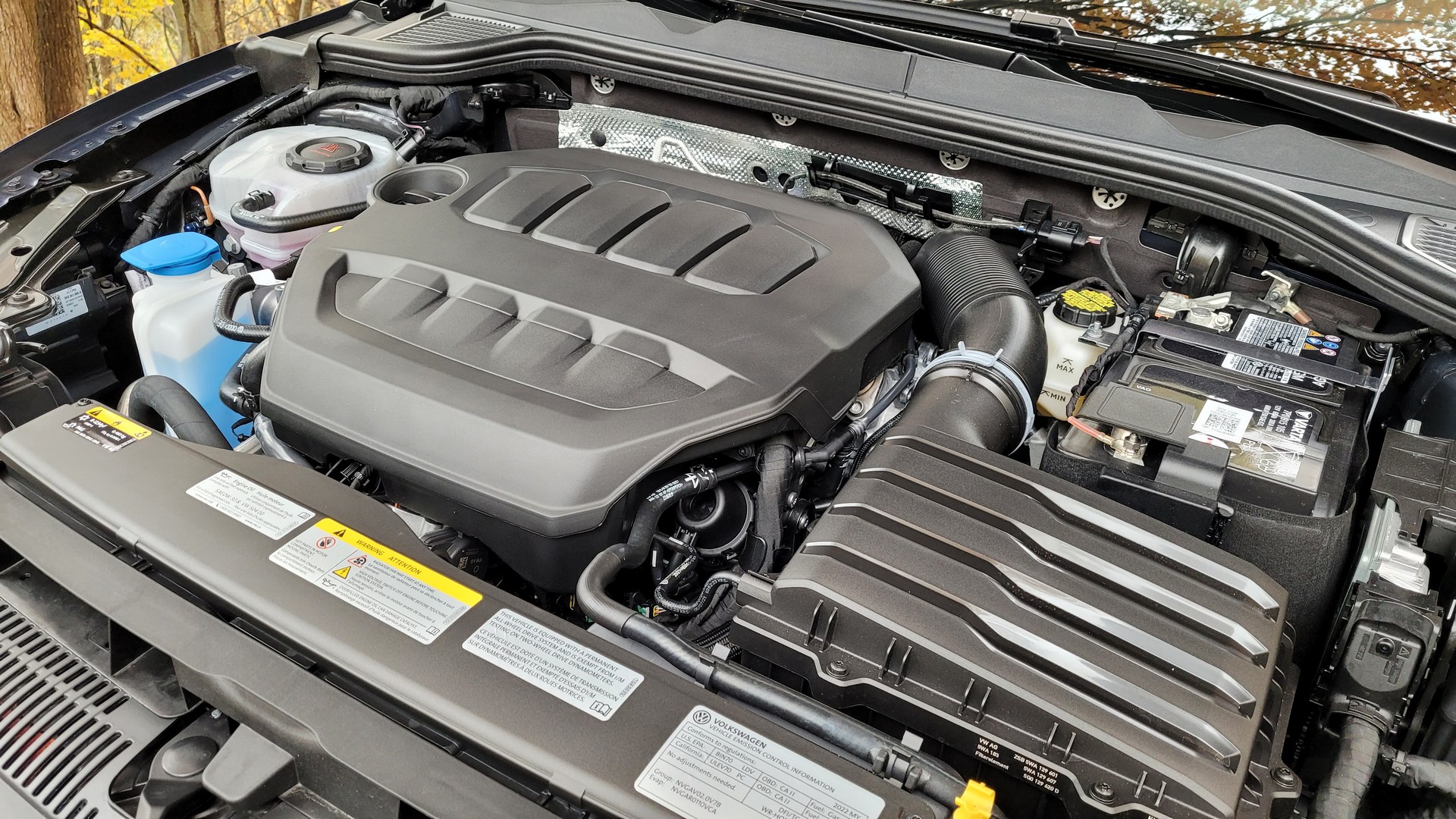 Drivers looking for more power can opt for the Golf R, which has 315 hp (235 kW / 319 PS) and 295 lb-ft (400 Nm) of torque when equipped with the optional seven-speed DSG transmission. However, drivers who prefer to shift for themselves will have to make do with a slightly reduced torque output of 280 lb-ft (380 Nm). 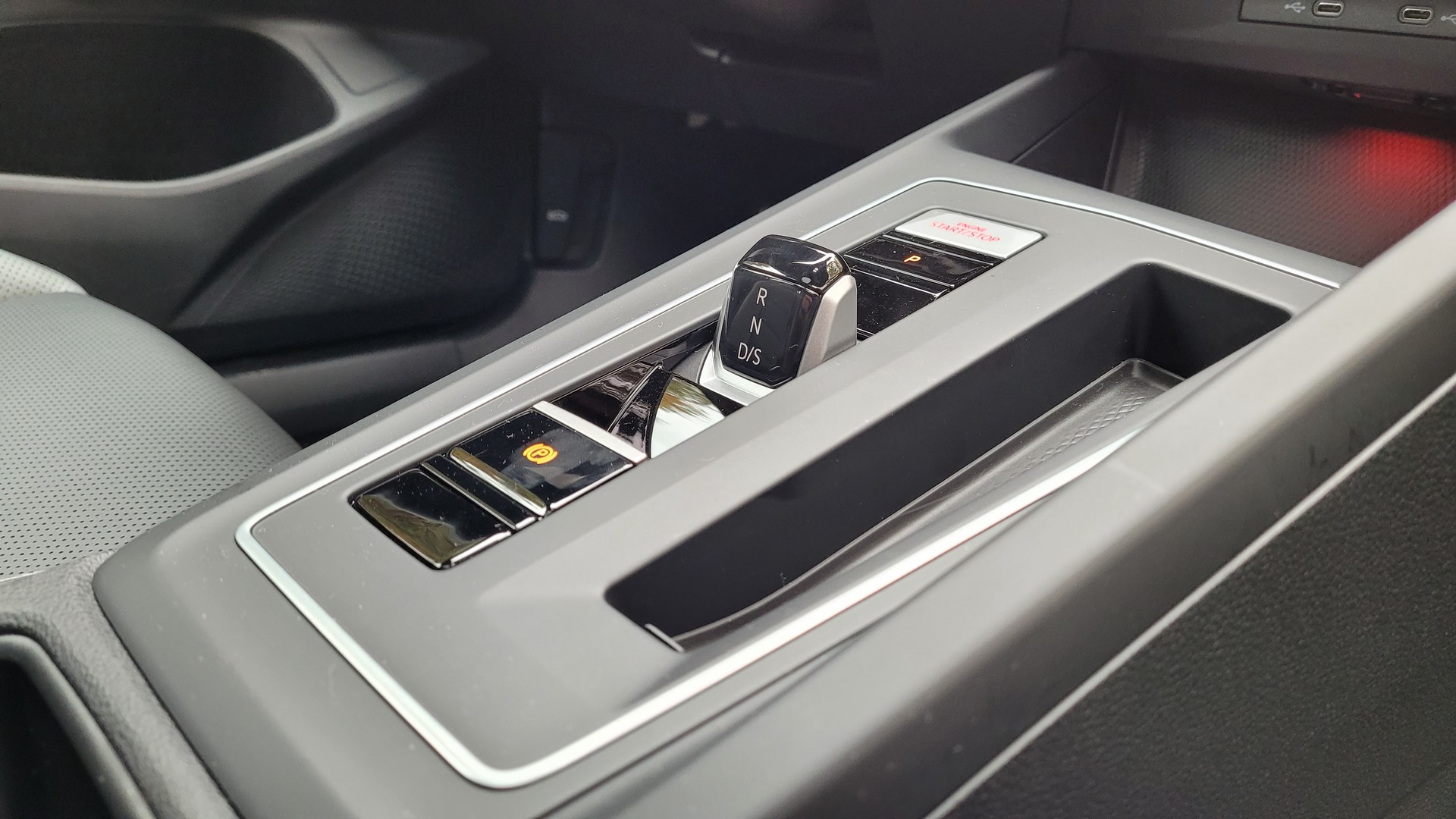 Regardless of which model is selected, both come standard with a six-speed manual transmission. While we didn’t test the DIY gearbox this time around, when we drove the Euro-spec model earlier this year we found it to be a willing partner that was also pretty forgiving.

The DSG, on the other hand, offers fast and smooth shifts that are almost always perfectly timed. Its responsiveness depends on the selected driving mode as Comfort optimizes “compliance,” while Sport allows for more aggressive shifts. There are also Eco and Custom modes, with the latter being notable for allowing drivers to fine-tune the car to their liking.

The Golf R goes even further as it drops the Eco mode while adding Race, Drift, and Special settings. Drift tells the electronic stability control system to relax, while also directing the torque vectoring all-wheel drive system to send power to the outside rear wheel. Special mode is a bit gimmicky as it was designed for use on the Nürburgring and features settings optimized for that specific track. 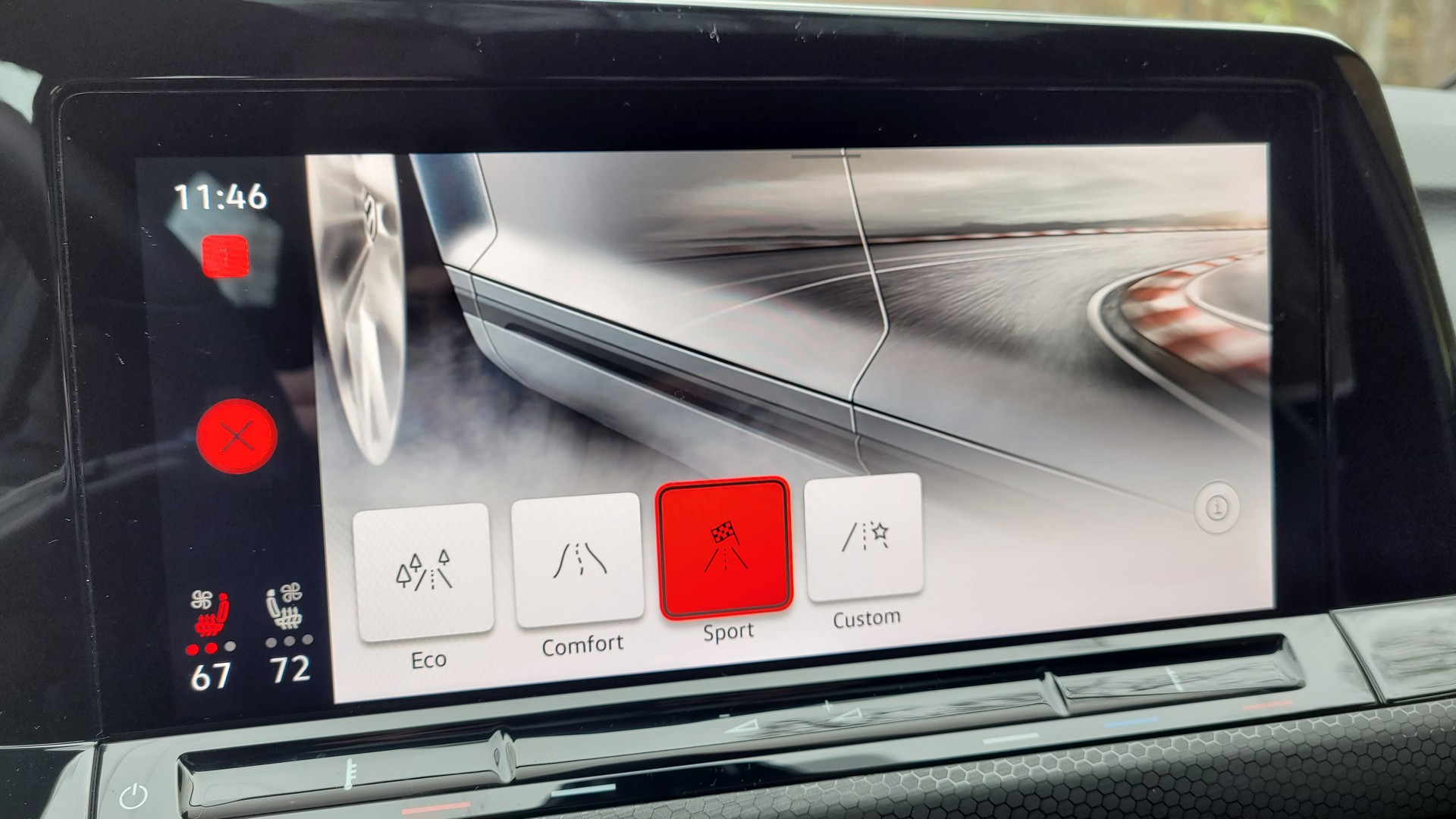 Putting the modes aside, the engine and DSG transmission largely work well together. That being said, we did experience some hesitation when mashing the accelerator as the car seemingly had to think about what to do next. These incidents were rare, but it’s never fun waiting for something to happen.

The Hot Hatch Benchmark Gets Even Better 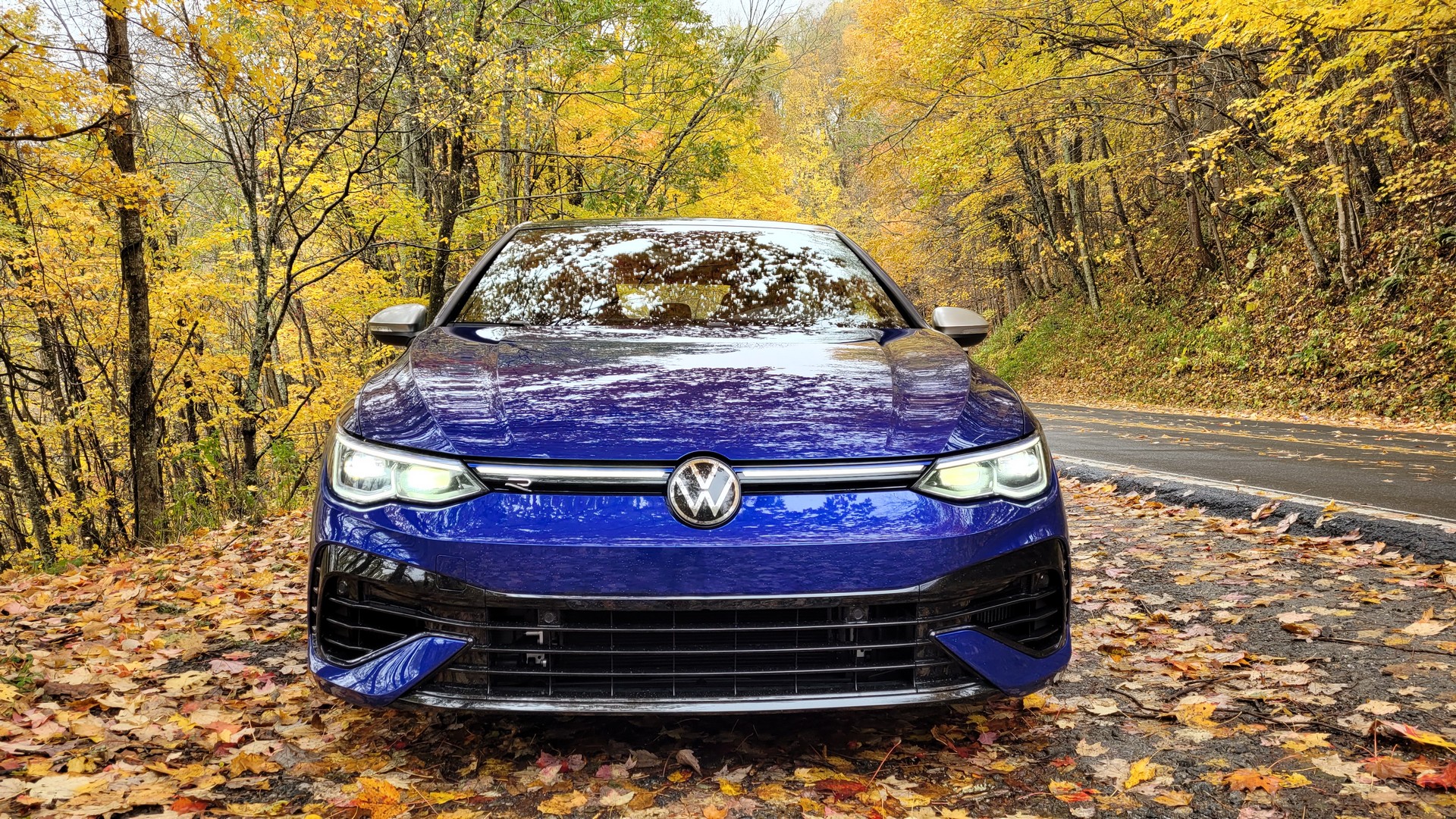 Despite being all-new, the Golfs continue to ride on Volkswagen’s MQB platform. However, there are a handful of changes as they now use more ultra-high strength steel and a lighter aluminum front subframe.

Besides the suspension tweaks, the model features an electronically controlled limited-slip differential and an available adaptive damping system that can adjust up to 200 times per second. Furthermore, there’s a new Vehicle Dynamics Manager, which helps to coordinate the car’s various systems to help minimize understeer, maximize grip and deliver neutral handling. 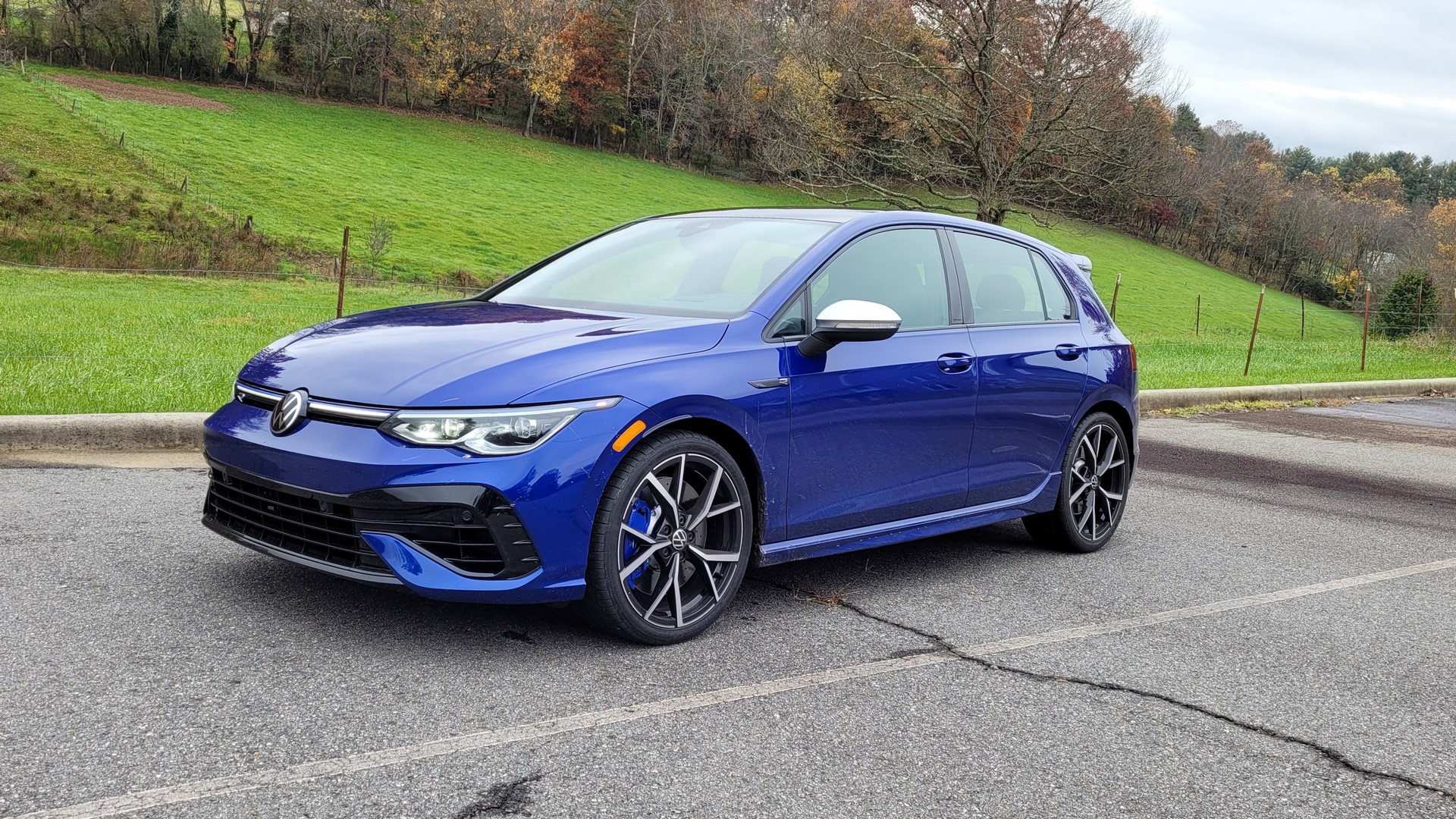 The end result is a hatchback that feels great to drive and offers impressive levels of grip. We quickly discovered the latter on twisty mountain roads outside Ashville, which were slick from an early morning rain. Despite the wet conditions, the GTI remained steadfast and only stepped out of line once when pushed too far.

The Golf R takes things up a notch as it features standard adaptive dampers, a sportier suspension, and a new all-wheel drive system with torque vectoring. It can send up to 100% of the rear torque to the outside rear wheel and this helps to improve handling.

This is noticeable behind the wheel as while the Golf GTI is good, the Golf R is even better. Cornering feels tighter and more precise, while the added traction of all-wheel drive meant the hatch remained surefooted. 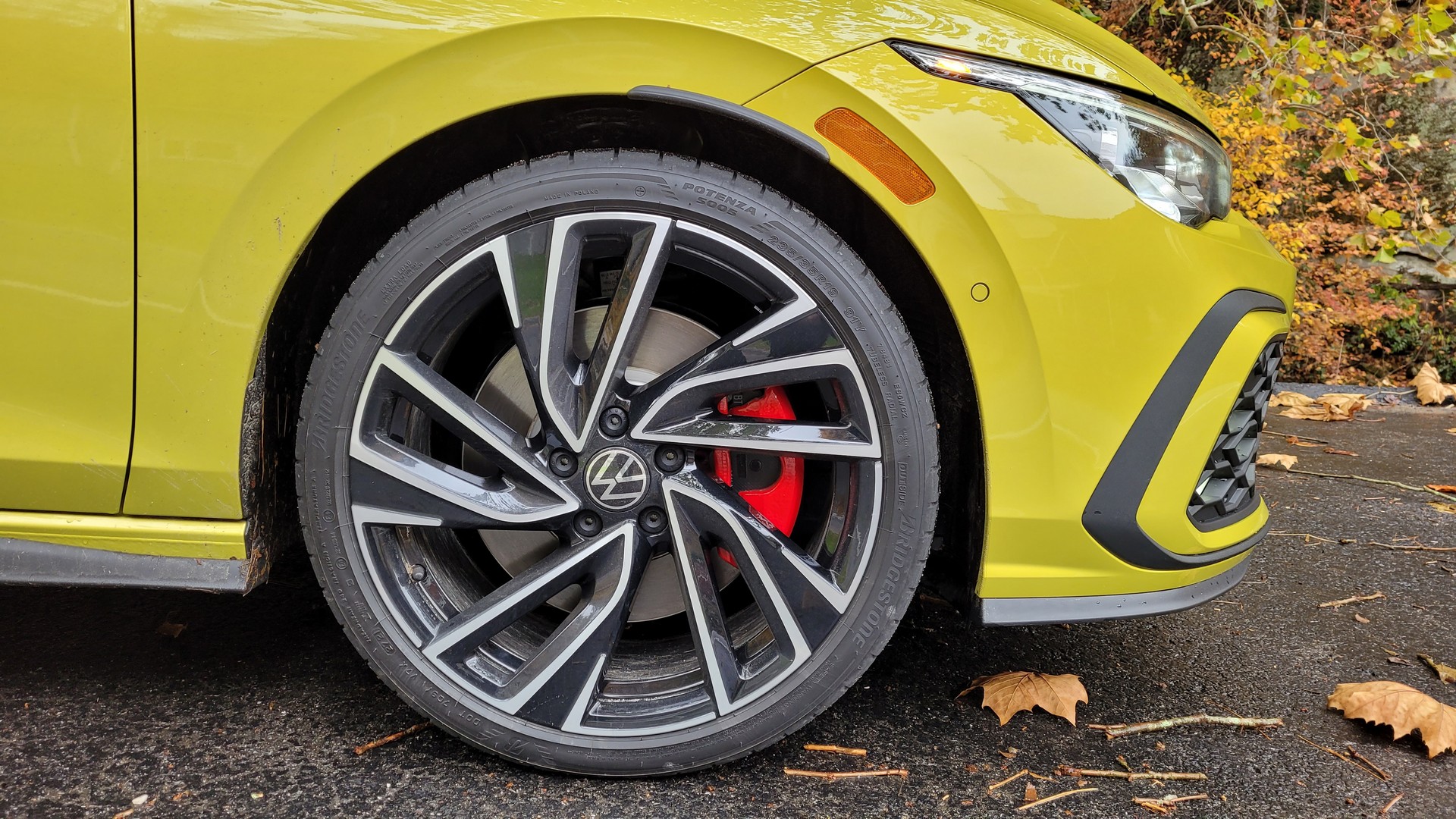 Another plus is the Golf R’s beefy braking system, which features 14.1 inch (358 mm) cross-drilled front discs, two-piston floating calipers, and aluminum hats for a 1.3 lbs (0.6 kg) weight reduction. The GTI’s braking system is more basic and uses smaller 13.4 inch (340 mm) ventilated front discs. However, both are perfectly capable and feature 12.2 inch (310 mm) discs out back.

Sticking with driving dynamics, both models are equipped with a progressive variable-ratio steering system. They’re similar, but the Golf R has a tighter lock-to-lock of 1.97 turns to the GTI’s 2.1.

The steering varies based on the selected driving mode, but Sport mode offers a good mix of effort and responsiveness. However, in the twisties, a quick push of the steering wheel’s R button puts the model into Race mode and this tightens things up a bit. 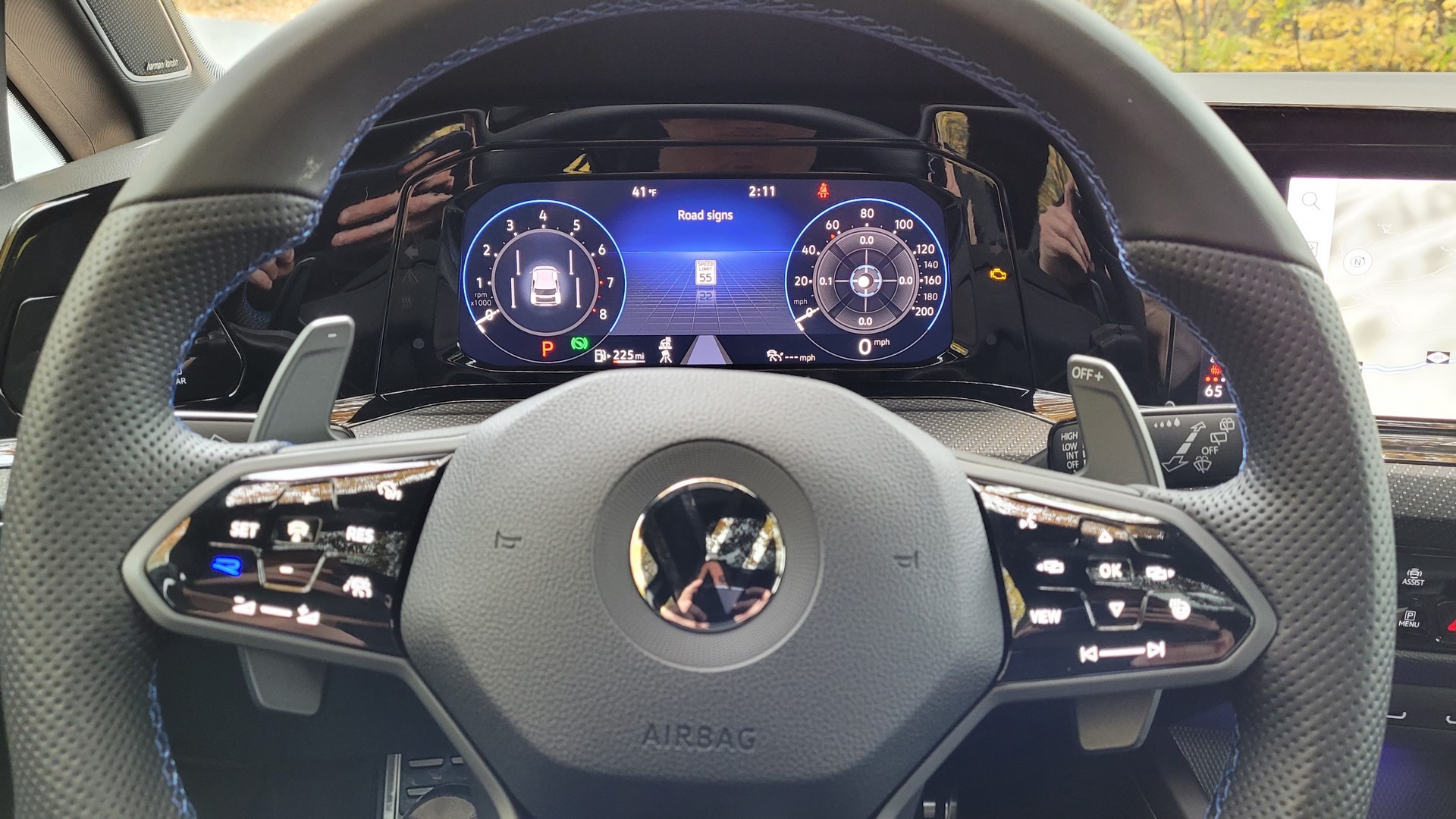 Speaking of modes, it’s worth noting that Volkswagen wants owners to have fun as there are ESC Sport and ESC Off settings. ESC Sport changes the thresholds to allow for more freedom, while ESC Off deactivates the system altogether.

Despite being a heck of a lot of fun, the Golfs aren’t a pain in the back. Both models ride firm, but they’re fairly compliant given their sporty nature and seem perfectly comfortable for daily use. The cabin is also relatively hushed, but thankfully some exhaust crackle can be heard inside. 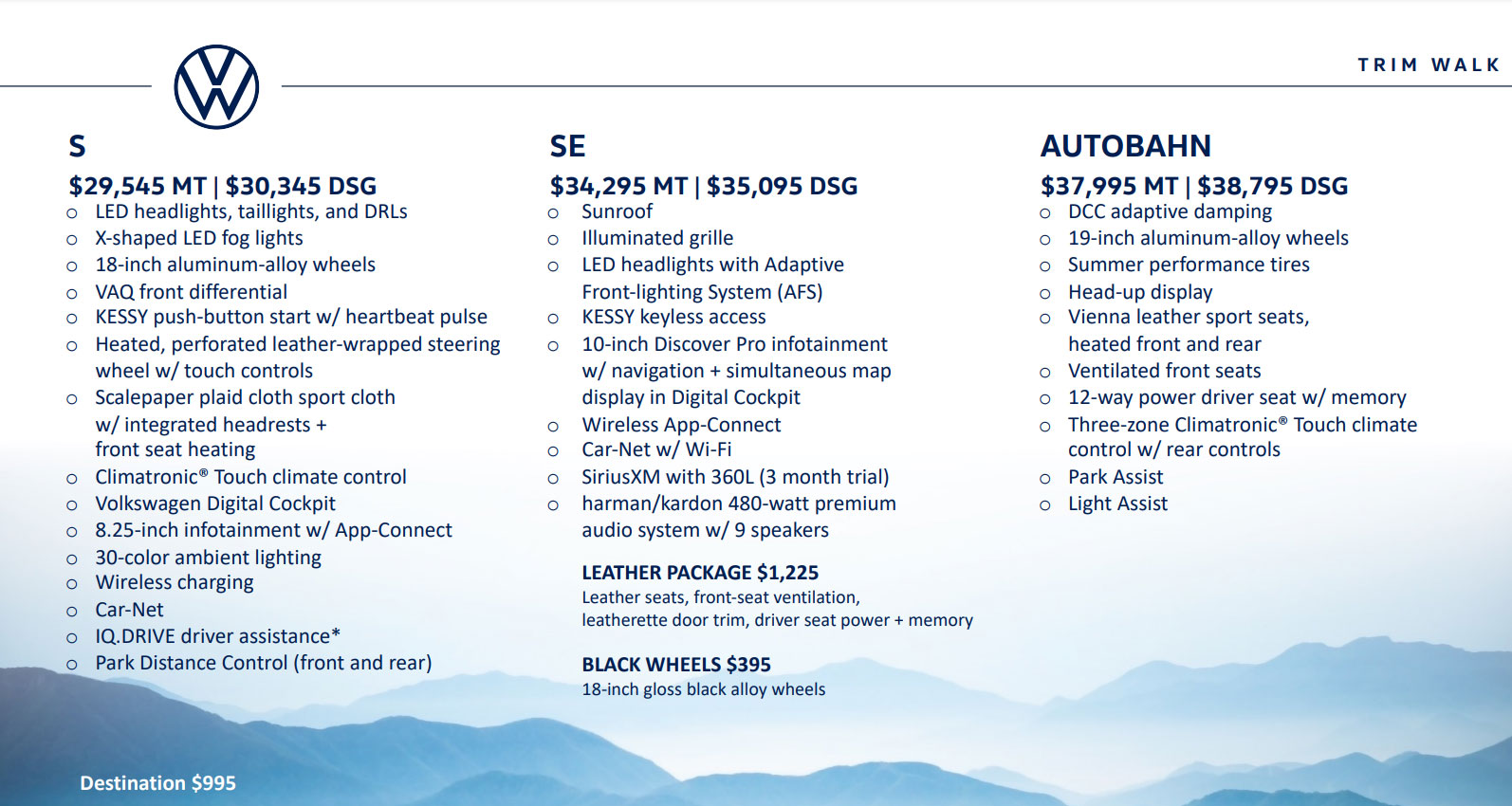 Like virtually everything else, the Golf GTI is more expensive than it used to be as pricing starts at $29,545 before a $995 destination fee. Moving up to the mid-level SE will set you back $34,295 while the range-topping Autobahn trim begins at $37,995.

The Golf GTI SE seems to offer the best combination of value and equipment, and can be outfitted with a $1,225 package that adds leather, heated and ventilated front seats, and 12-way power adjustment on the driver’s side. Speaking of options, all three trims can be equipped with the aforementioned DSG transmission for $800.

Besides the equipment we talked about earlier, the Golf GTI comes with an extensive list of driver assistance systems including Front Assist, a Blind Spot Monitor and Adaptive Cruise Control with Stop & Go. Other highlights include Lane Assist, Rear Traffic Alert and a semi-autonomous Travel Assist function, which combines adaptive cruise control with lane centering. 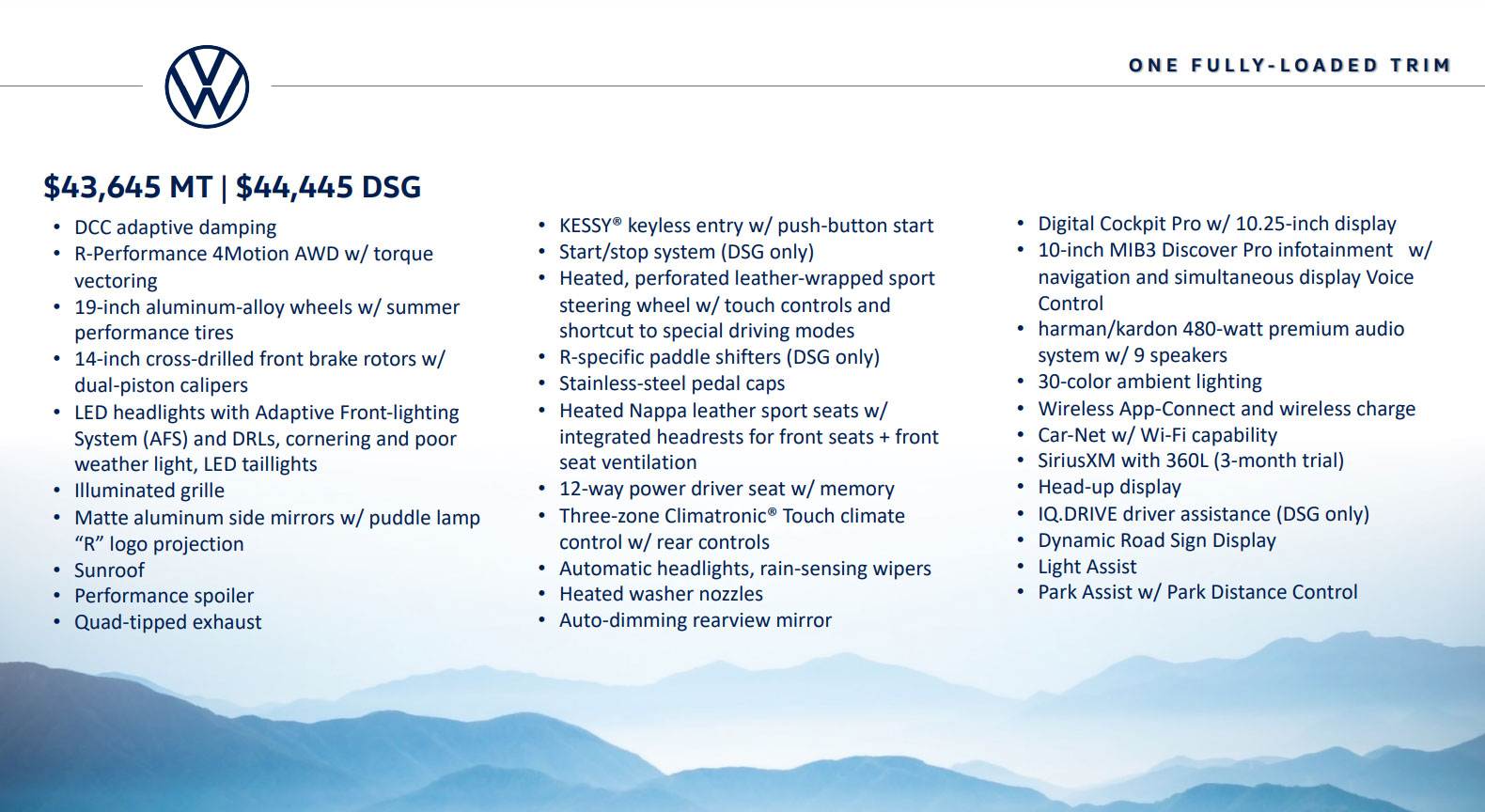 Pricing for the Golf R is straightforward by comparison as it’s only offered in one fully-equipped trim. This is a bit of a blessing and a curse as it means the model starts at $43,645 and climbs to $44,445 with the DSG transmission.

That’s luxury car territory and the Golf R is effectively in a class of its own. Its nearest competitor in America is the Honda Civic Type R, but it is cheaper and lacks all-wheel drive. However, we’ll get a better idea of how the two models match up when the redesigned Civic Type R arrives next year.

A Greater Golf With Some Quirks 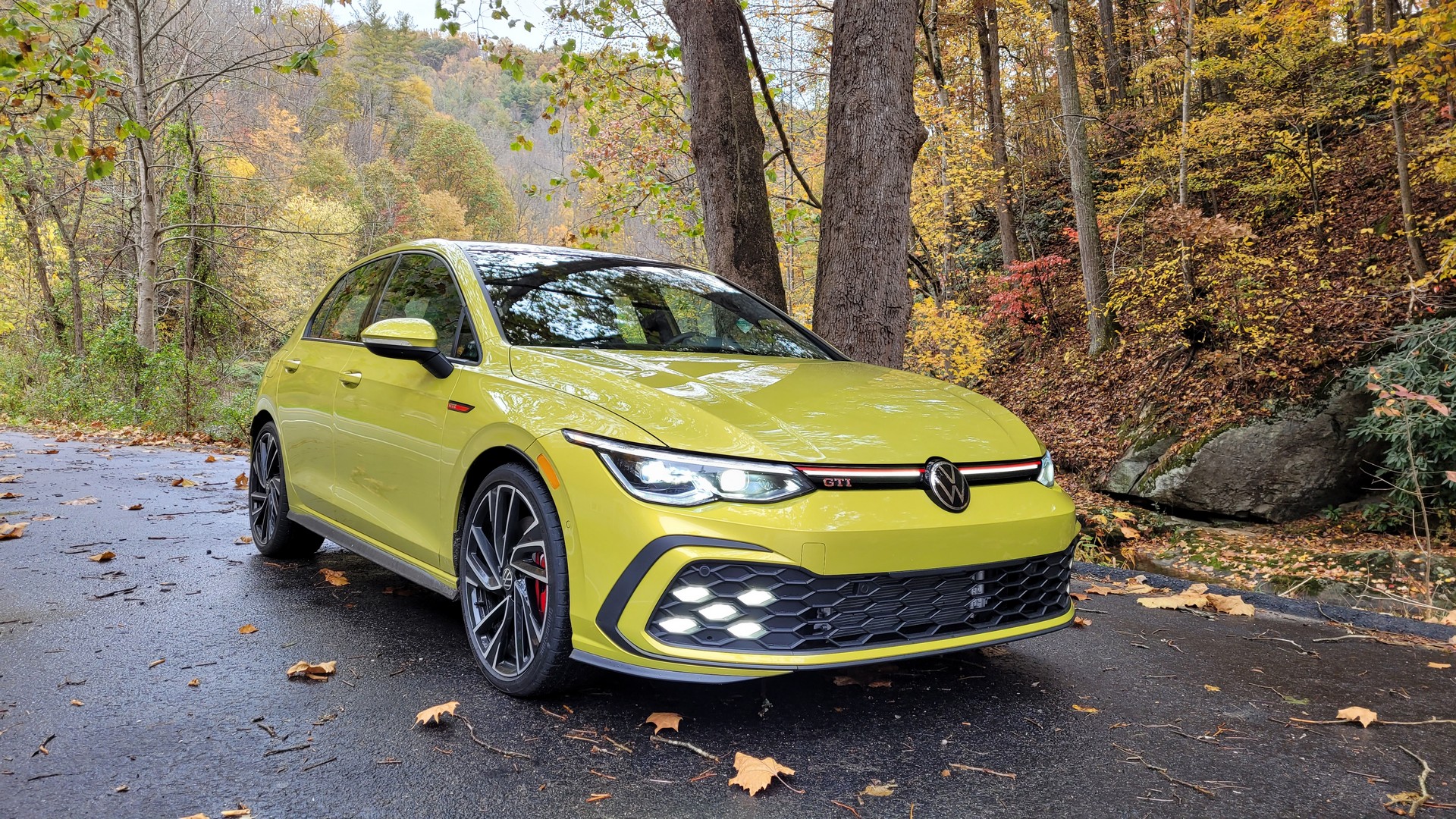 The Golf GTI and Golf R are widely seen as the benchmark for hot hatches and it’s easy to see why as both models offer great driving dynamics, a firm but comfortable ride, and plenty of power.

The Mk8 builds on its predecessors by further refining the driving experience and adding some extra performance. The Golf R also makes its long awaited return and now features a torque vectoring all-wheel drive system for even better handling.

That being said, I personally prefer the GTI as the differences between the two models don’t feel enough to justify an additional $14,100. Higher levels of equipment obviously factor into that, but the $34,295 Golf GTI SE gives you virtually everything you could want in a hatchback for $9,350 less than its high-performance counterpart.

While there’s a lot to like, the two Golfs aren’t perfect as some of the interior tech comes off as half baked. The touch controls can be hit or miss, while the infotainment system makes some relatively simple tasks overly complicated. This would typically be a minor annoyance, but it’s especially damning in a car where a manual transmission is one of the key selling points. However, if you can get past that, you’re in for a treat.