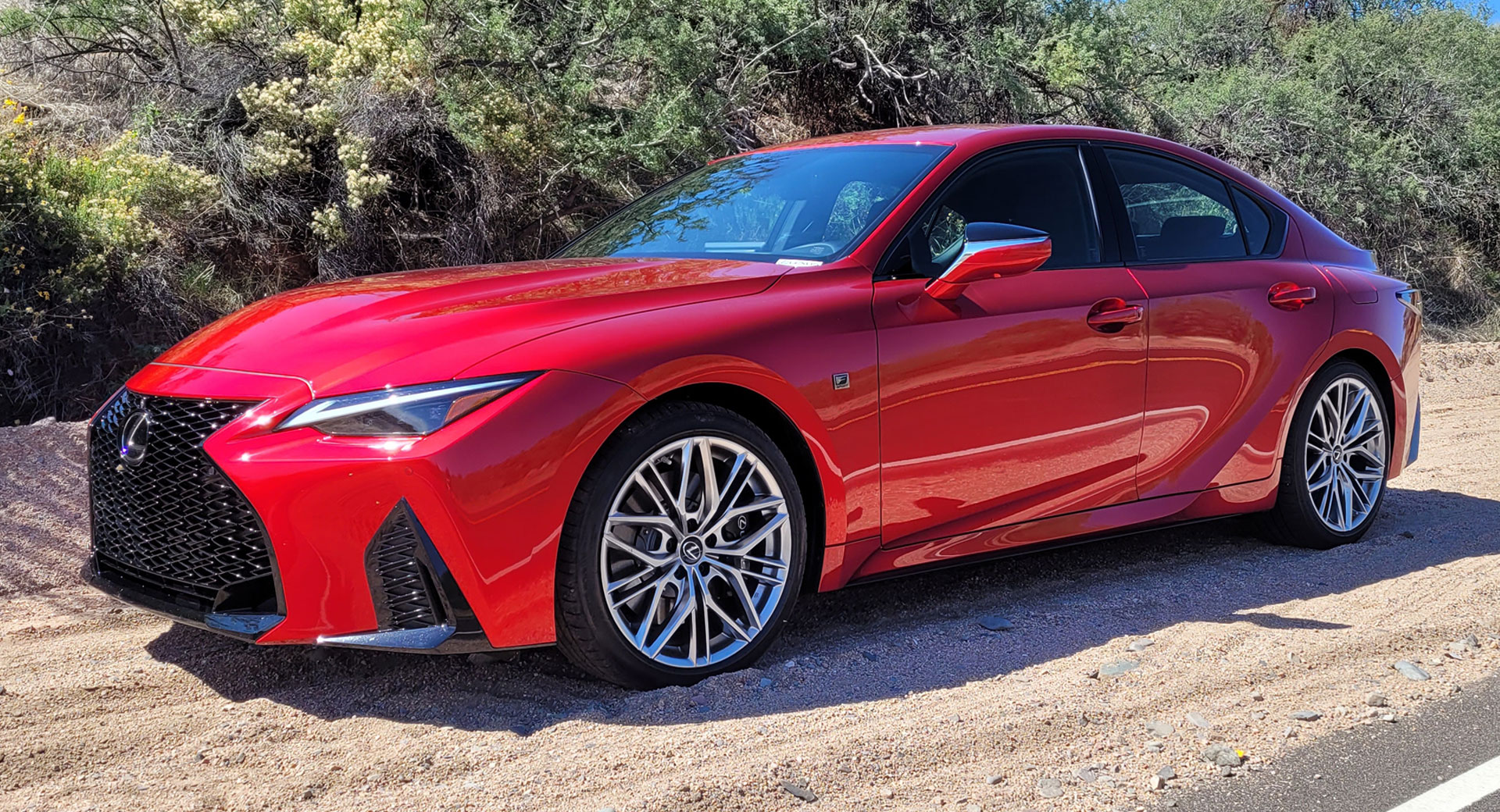 Lexus is known for cranking out comfortable cruisers, but they’re also a bonafide performance brand as they’ve been producing F models for more than a decade.

That journey began with the IS F, which debuted at the 2007 North American International Auto Show in Detroit. The sports sedan was mostly well received, but Lexus decided against a follow up when the third-generation IS debuted five years later.

However, like a number of competitors, Lexus has decided to launch their own mild-performance sub-brand akin to BMW’s M Performance and Cadillac’s repositioned V-Series. Known as F Sport Performance, the vehicles will feature aggressive styling and improved performance, but fall short of being a full F model.

The first member of the F Sport Performance family is the IS 500 and it’s a promising preview of things to come. It might not be as extreme as an IS F, but it mixes comfort and sport while also being a heck of a lot of fun. 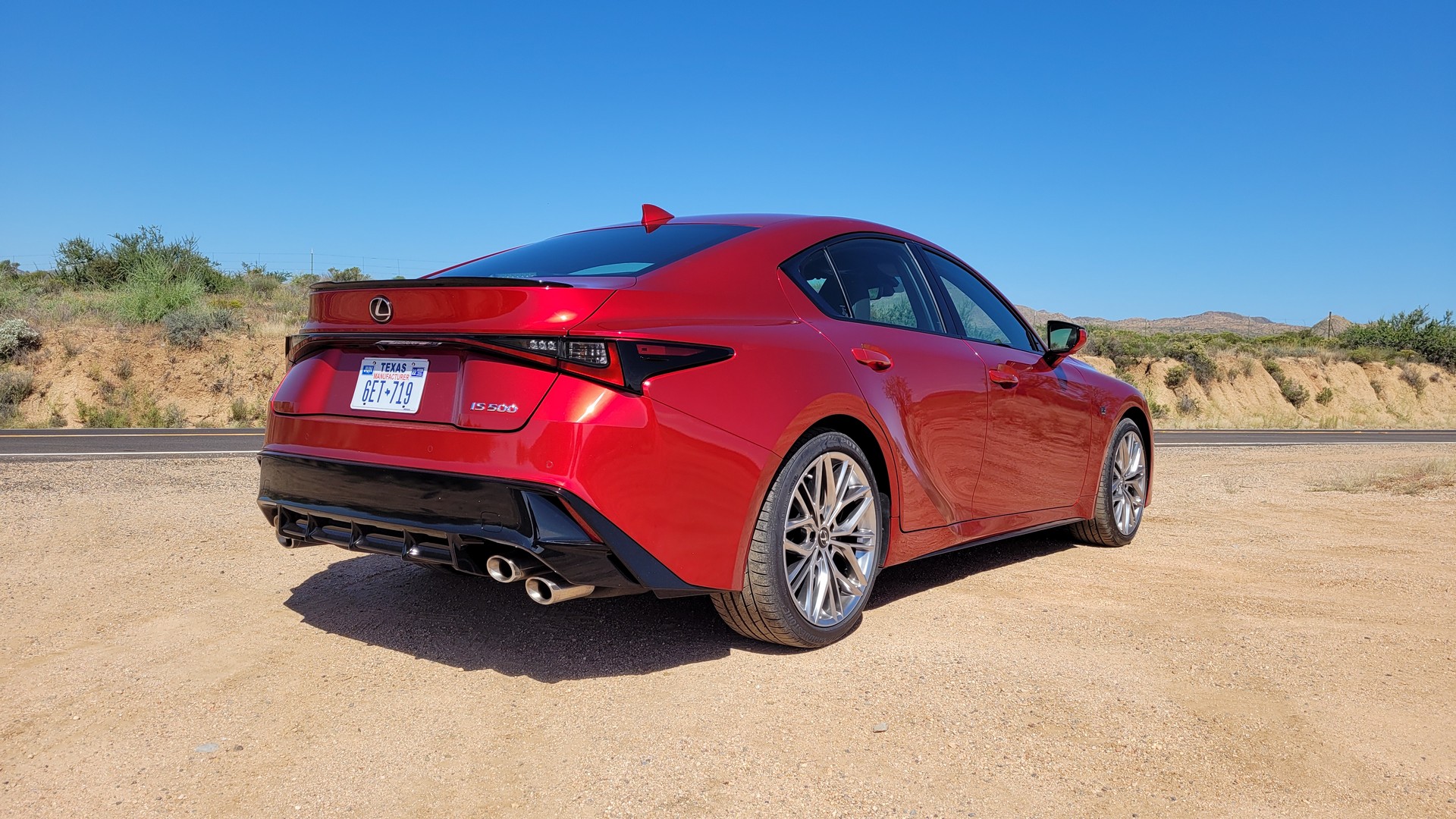 The facelifted IS looks great in standard form, but the IS 500 F Sport Performance kicks things up a notch as it is distinguished by a bulging hood, a modified front bumper and lengthened fenders. These changes don’t immediately jump out, but they enabled engineers to shoehorn a 5.0-liter V8 into the engine bay.

Designers didn’t stop there as the IS 500 has been outfitted with exclusive 19-inch Enkei wheels, which are lighter than those found on the more mainstream F Sport variant. The high-performance model also features gloss black accents, dark chrome trim, and black badges which indicate this is a F Sport Performance variant.

Most of the changes are subtle, but there’s no mistaking the IS 500 when viewed from the rear.  A stacked four-tailpipe exhaust system makes the car’s performance known, while a black rear spoiler and unique diffuser emphasize that message. 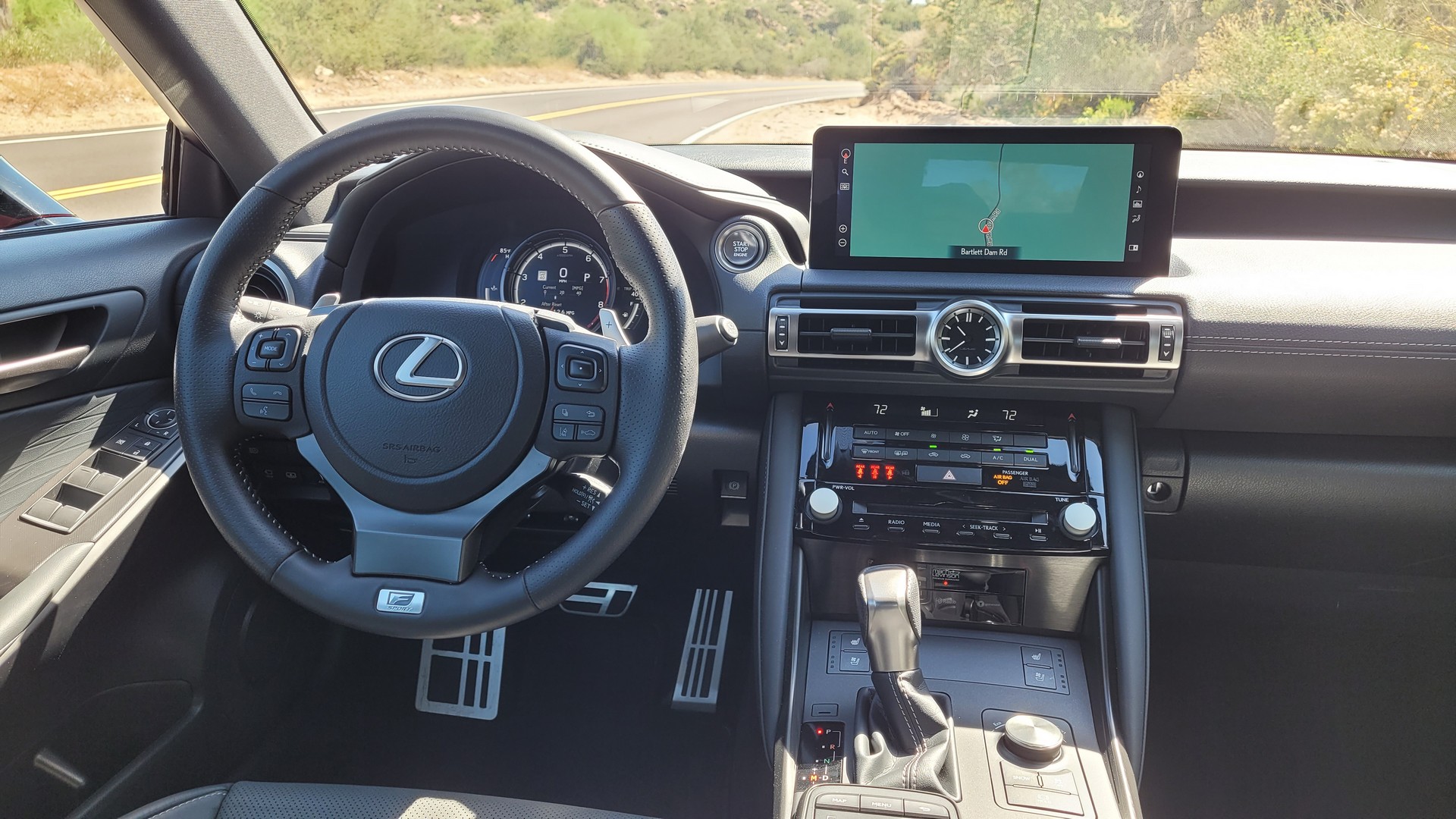 While the exterior looks great, the cabin feels like a relic from a bygone era as it’s virtually identical to the one found in the 2014 IS.

This is disappointing for a ‘new’ car and it’s age can be clearly seen in the prominent placement of the CD player. Further complicating matters is subpar switchgear, a mediocre 8-inch infotainment system and some questionable materials.

On the bright side, it comes nicely equipped with heated and ventilated front sport seats wrapped in perforated NuLuxe upholstery. Buyers will also find a dual-zone automatic climate control system, a power moonroof, and a heated steering wheel with an F Sport Performance badge. Other highlights include alloy pedals, a 10-speaker Pioneer audio system, and an LFA-inspired digital instrument cluster. 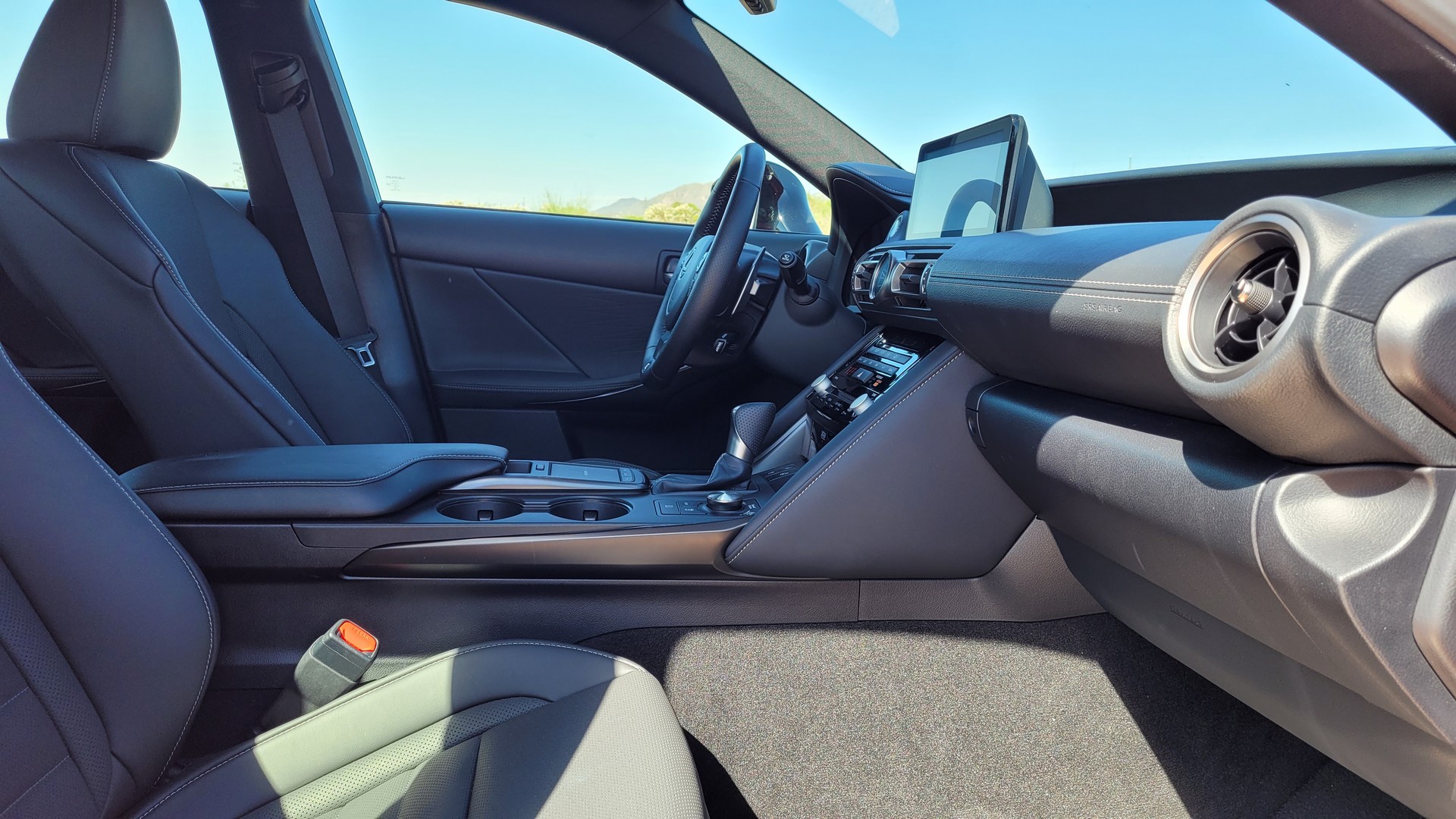 While the interior isn’t the car’s strong suit, it’s more spacious than the dimensions would suggest. There’s plenty of room up front, but the rear seat is on the small side as it offers a mere 32.2 inches (818 mm) of legroom. However, it feels roomier than that and I was able to squeeze behind the driver’s seat without much of an issue. Being in the back isn’t the most enjoyable experience, but quick trips around town shouldn’t be a problem as there’s adequate head- and legroom for adults.

Speaking of room, there’s 10.8 cubic feet (306 liters) of cargo space in the trunk and that can be increased by folding the rear seats down. However, that’s less than competitors such as the Audi S4, BMW M340i and Mercedes C43.

A Naturally Aspirated V8 With 472 HP 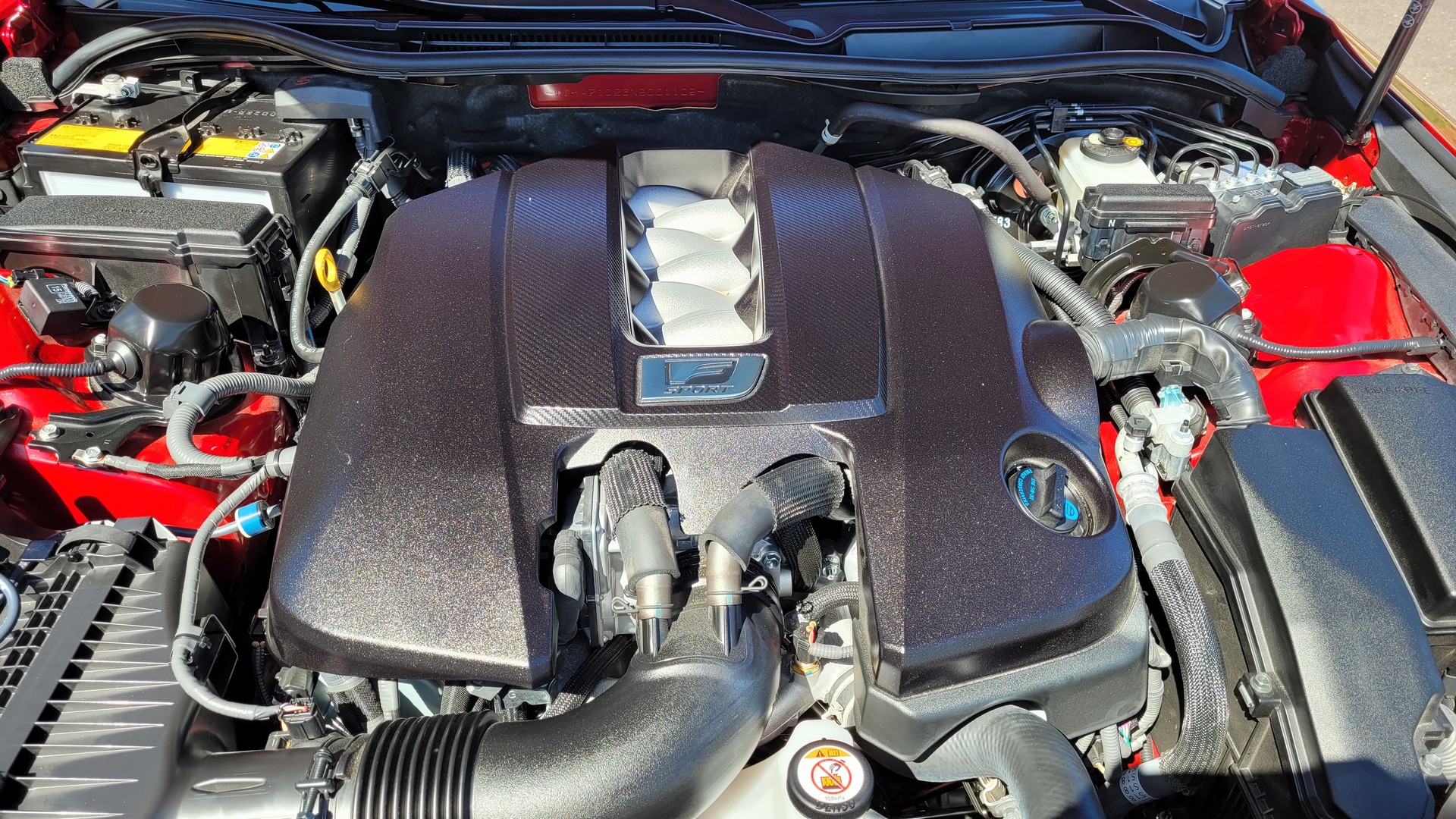 While all of the aforementioned competitors use a turbocharged six-cylinder engine, Lexus apparently believes there’s no replacement for displacement. As a result, the IS 500 has been outfitted with a naturally aspirated 5.0-liter V8 that pumps out 472 hp (347 kW / 479 PS) and 395 lb-ft (536 Nm) of torque. 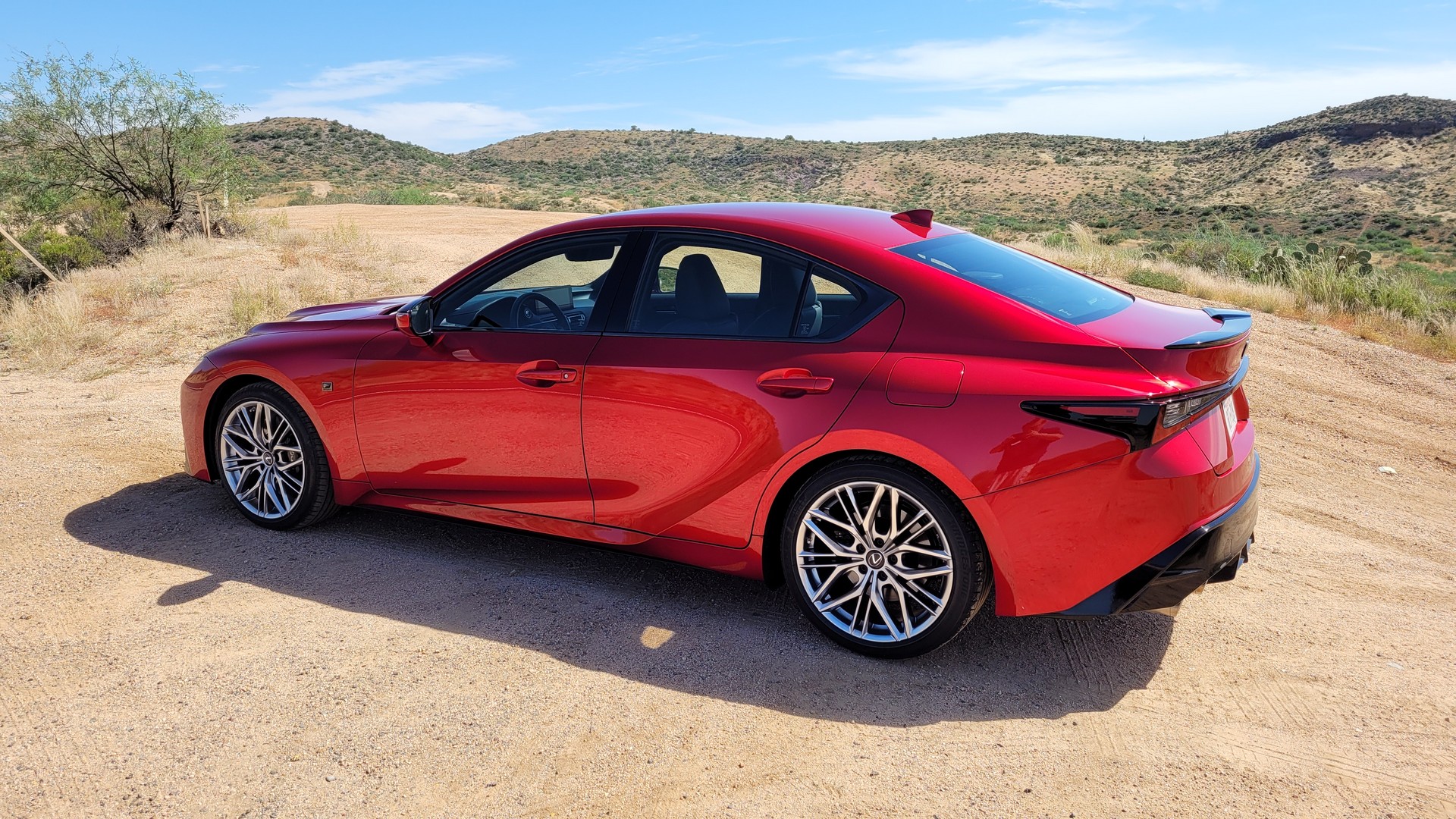 Needless to say, the V8 is also pretty thirsty as the IS 500 has an EPA-estimated fuel economy rating of 17 mpg city, 25 mpg highway and 20 mpg combined. All of the Germans post better numbers, even with standard all-wheel drive on the C43 and S4.

Of course, buying a sports sedan based on fuel economy is a bit like buying art because you like the frame. Instead, it’s all about the experience and this is where the IS 500 excels. The engine is civilized around town but, if you mash the accelerator, it comes roaring into life and makes its presence known. Furthermore, thanks to its naturally aspirated nature, there’s no waiting for turbos to spool up.

It’s A Blast To Drive 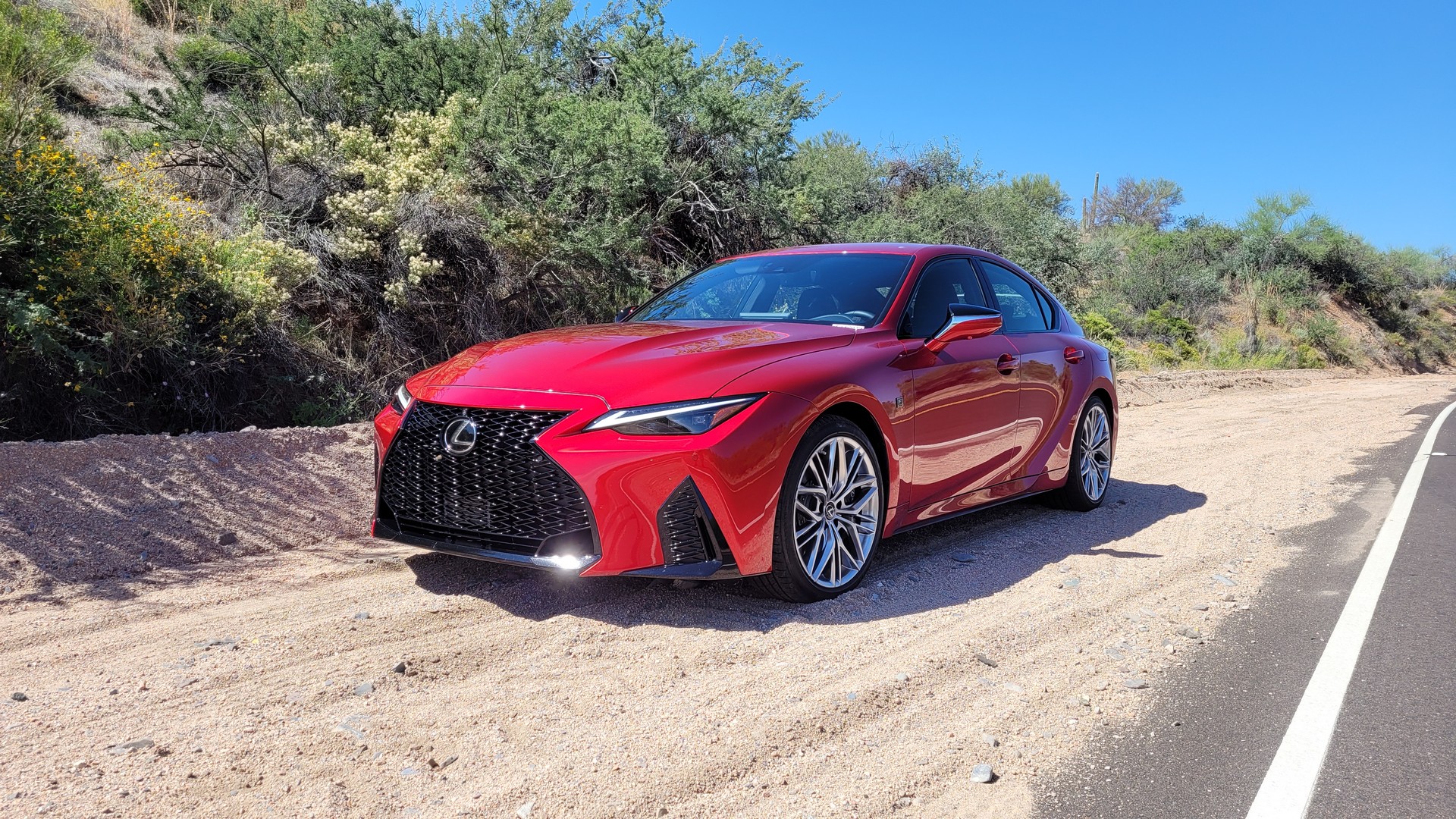 The good news doesn’t end with the engine as the IS 500 feels like a proper sports sedan. The ride offers a nice mix of comfort and sport, which makes it an ideal daily driver. The steering is also good as it’s responsive and nicely weighted.

Barreling down back roads outside Scottsdale was an absolute blast as the car felt perfectly balanced, despite having a slightly worse weight distribution thanks to the hefty V8 up front. Cornering was impeccable, while the suspension also soaked up minor imperfections without much fuss.

A lot of this can be credited to the rear-wheel drive platform as well as the standard Dynamic Handling Package, which includes an adaptive variable suspension and a limited slip differential. The model also boasts a Yamaha rear performance damper and an upgraded braking system with larger discs. The latter measure 14 inches (356 mm) up front and 12.7 inches (323 mm) at the rear, which makes them 0.8 and 1 inch (20 and 25 mm) larger than those found on the standard model. 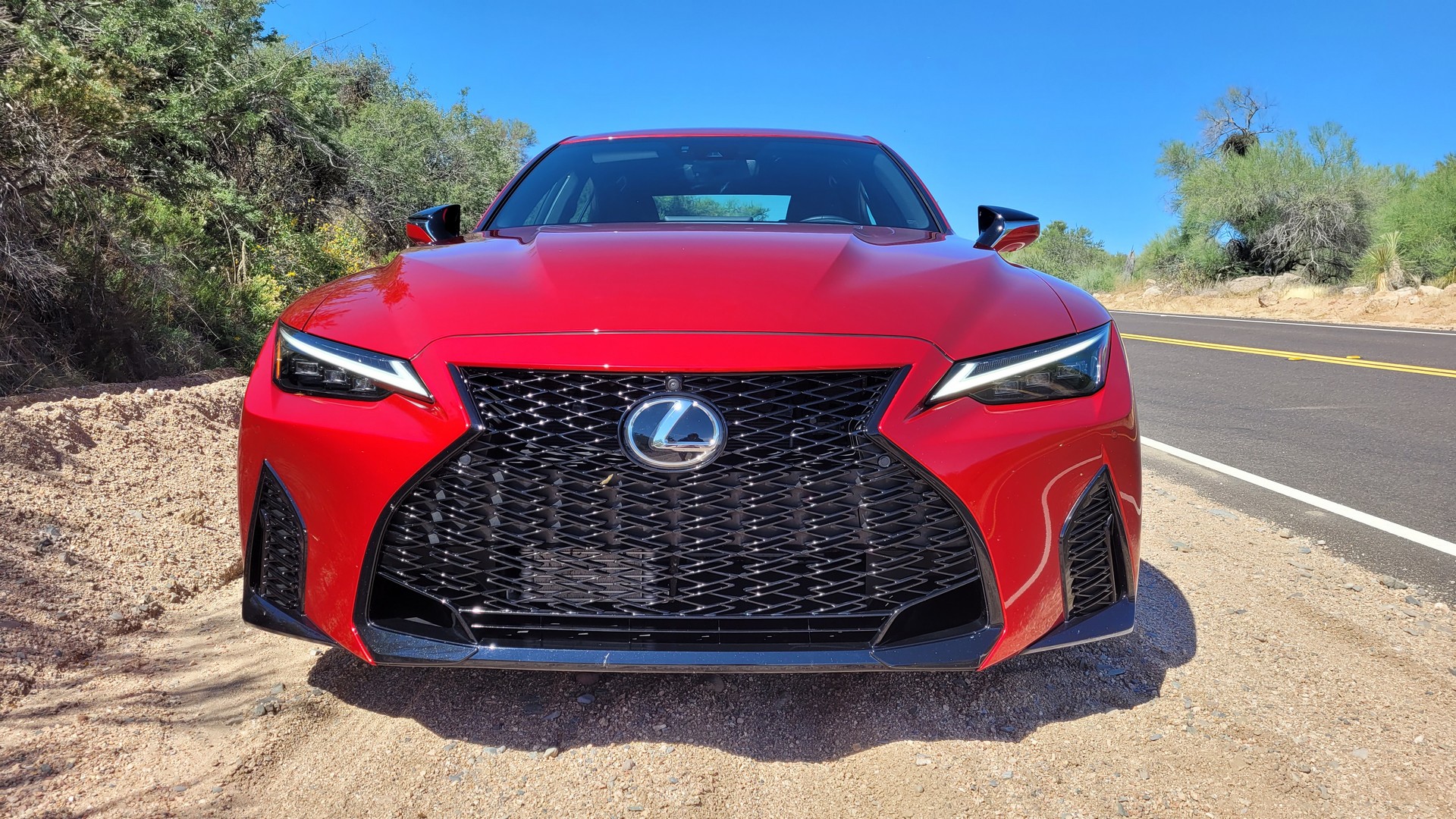 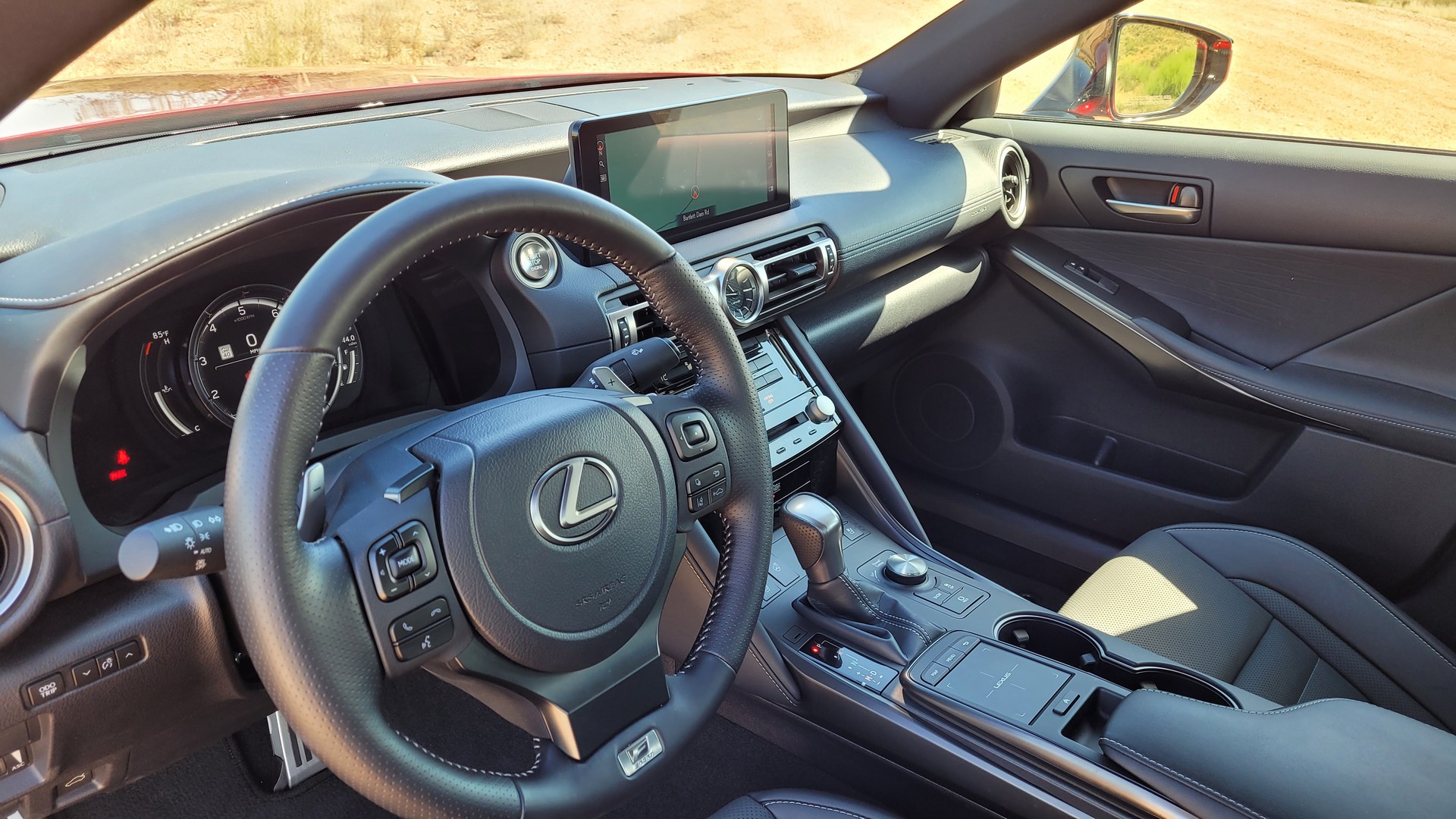 Putting the Cadillac aside, Lexus offers a slightly more luxurious IS 500 Premium for $61,000. It features additional standard equipment including premium LED headlights, a panoramic view monitor and a power rear sunshade. Buyers will also find a larger 10.3-inch infotainment system with GPS navigation as well as a 17-speaker Mark Levinson premium audio system.

Customers looking for something more exclusive can opt for the IS 500 Launch Edition, which is limited to 500 units. It costs $67,400 and features an exclusive Incognito exterior with  matte black 19-inch BBS forged alloy wheels.

Moving into the cabin, the special edition is distinguished by black and gray ultrasuede upholstery, an individually numbered badge, and a heated leather steering wheel with ash wood trim. Owners will also find a special Launch Edition animation at startup.

A Fantastic Car, But It’s A Shame About The Interior 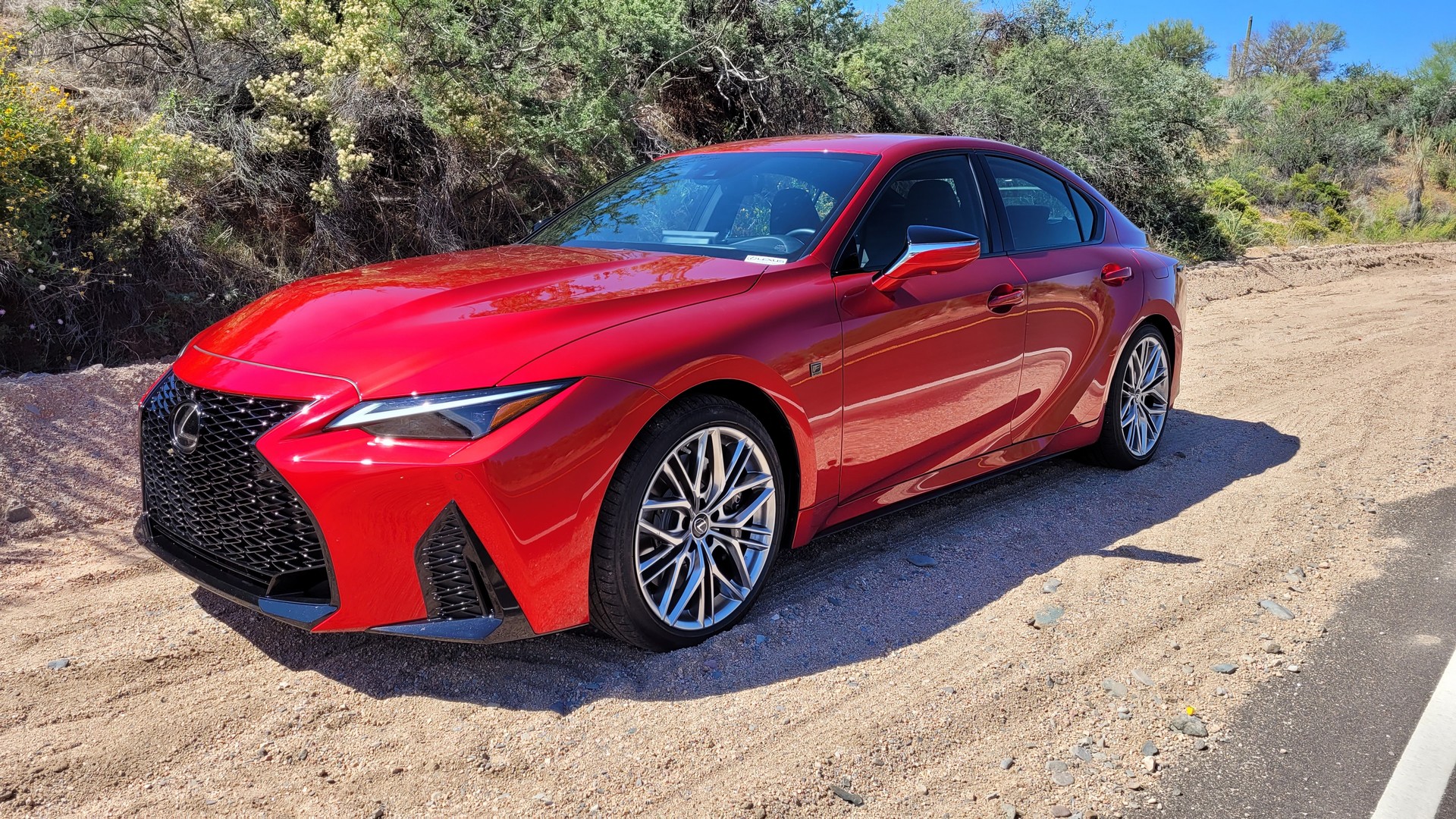 If you believe ‘could have had a V8’ applies to more than just juice drinks, it’s hard not to love the IS 500 and its naturally aspirated engine. It offers impressive performance and is a member of a dying breed.

Thankfully, the engine isn’t the only good thing about the IS 500 as the driving experience is remarkable. I took an RC 350 out on the track earlier this year and wasn’t terribly impressed, so I was a bit shocked by how nice the IS 500 is to drive. It has an undeniable sporting character, but is also perfectly comfortable around town. That’s a difficult balancing act, but Lexus appears to have pulled it off.

Unfortunately, everything isn’t perfect as the interior is woefully dated and a number of competitors offer more spacious accommodations. It’s a bit like the Cadillac in this regard as both are impressive sport sedans, but the interiors are a letdown.

Despite its quirks, the IS 500 is a fantastic addition to the lineup and it has us eager to see Lexus grow the F Sport Performance family in the future.