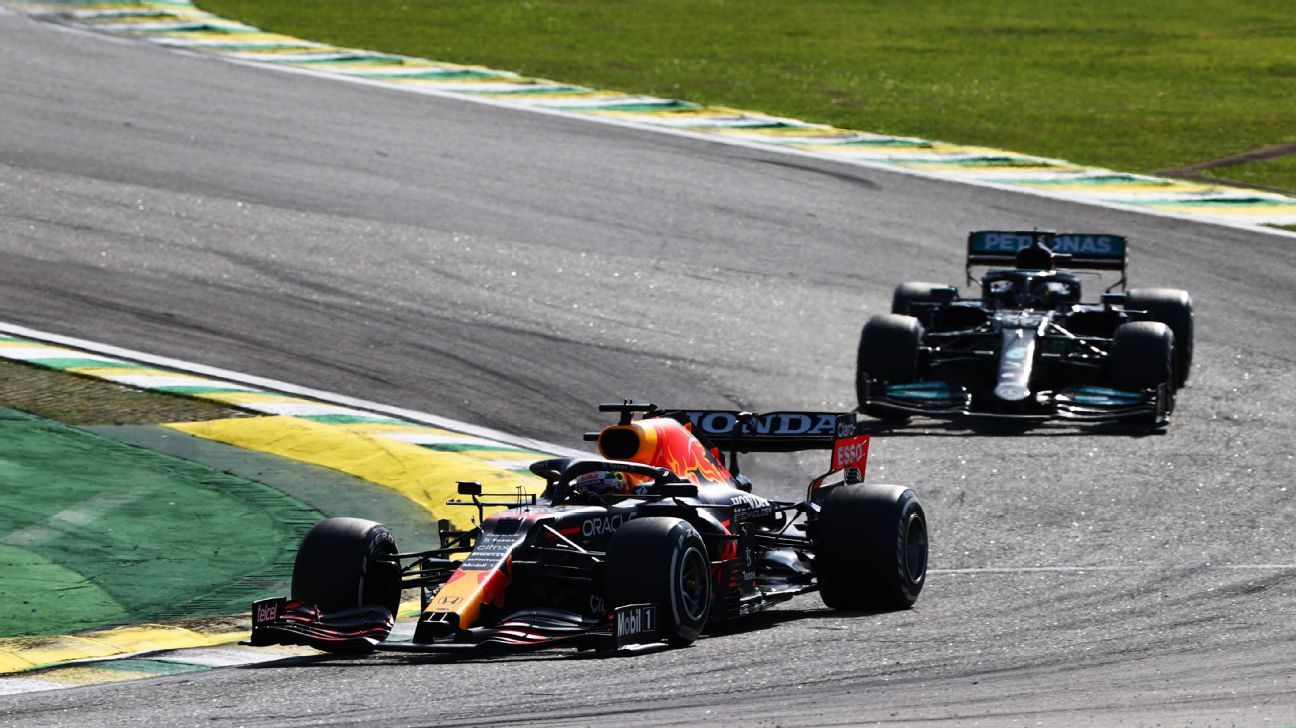 Lewis Hamilton was reluctant to blame Max Verstappen for running him off the track at the Sao Paulo Grand Prix, saying the incident that saw them nearly make contact at Turn 4 was “hard battling”.

Hamilton won Sunday’s race to close the gap to Verstappen in the championship to 14 points with three races left to run.

He started from tenth on the grid and had to pass the Red Bull driver on track to secure the victory.

By lap 19 he was up to second place and by lap 48 he was close enough to Verstappen to attempt a move around the outside of Turn 4 for the lead.

Hamilton was ahead of Verstappen entering the corner, but the Red Bull missed the apex, ran wide and forced Hamilton to take to the run off.

Verstappen held the position and, although the incident was noted by race control, it was not investigated by the stewards.

“I think I was ahead initially, and I think he held his ground and we both ran out of road,” Hamilton said. “Well, I think he was running out of road, so I obviously had to avoid to go out of road … but I mean, I didn’t think too much of it and obviously I’ll have to watch the replay.

“But it’s hard battling and wouldn’t expect anything less really. We didn’t touch wheels, which is good.”

Asked if he thought Verstappen was in the wrong, Hamilton added: “I’m not going to go into that. I need to go look back at it but it’s a racing incident and it probably doesn’t really matter. Got the result I needed.”

Verstappen said he ran wide in the corner because he thought it would be safer than trying to make the corner.

“We both of course, tried to be ahead into the corner, and so I braked a bit later to try and keep the position and the tyres were already a bit worn,” Verstappen said. “So I was really on the edge of grip, so that’s why I think I was already not fully on the apex.

“And it’s a safer way, of just running a bit wide there. In a way I was, of course, happy that the stewards decided that we could just keep on racing, because I think the racing in general was really good today.”

Race director Michael Masi, who is not one of the stewards but refers incidents to them, said the fact the cars did not collide and both went off was likely a factor in not investigating the incident.

“I think if you look at the proximity of the cars heading to the apex, where it is, nature of the corner, fact both cars went off, neither car lost position or anything like that, that was probably the general view,” he said.

However, Masi said he considered giving a black and white flag — used to indicate unsportsmanlike behaviour — to Verstappen, which he used later in the race when Verstappen weaved on the straight between Turn 3 and Turn 4.

“That certainly came into my mind,” he said. “I looked at it a few times and it wasn’t far off a black and white flag to be honest, for Max.”

Two black and white flags in one race mean the driver is reported to the stewards for a potential penalty.