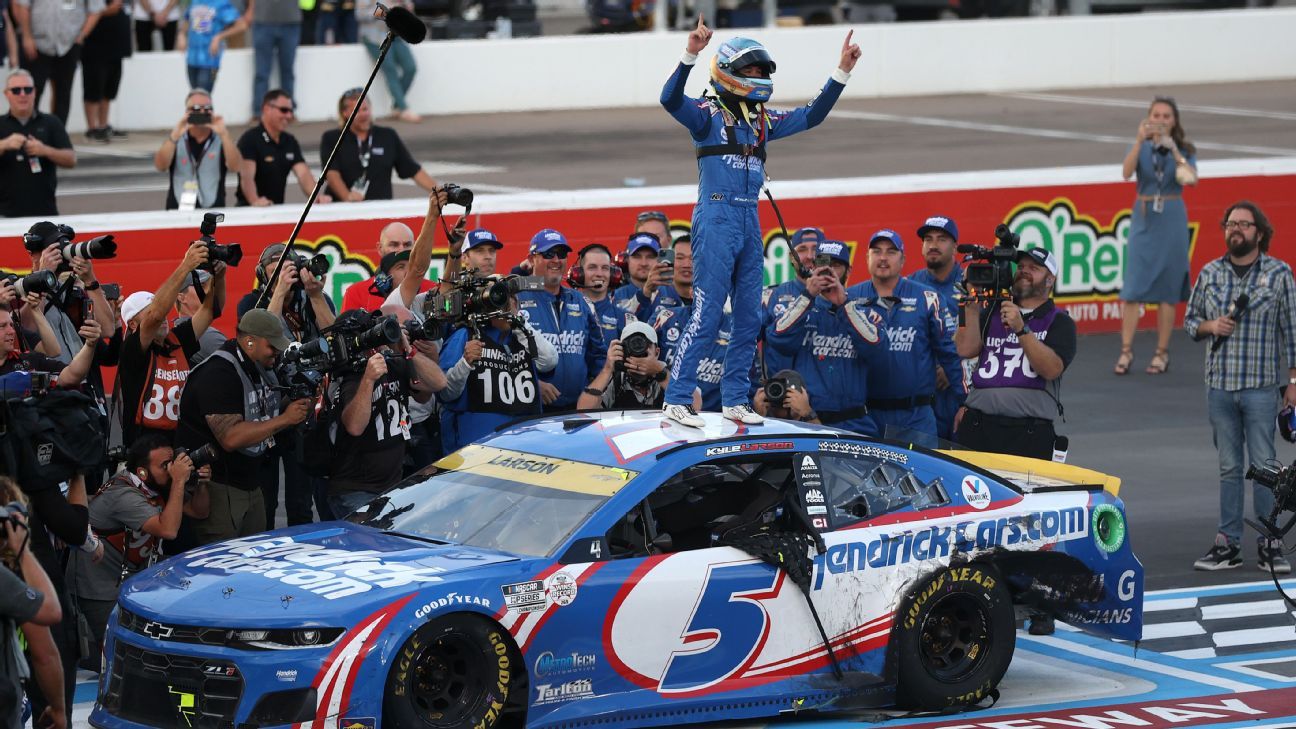 It is notoriously difficult to see a truly great race car driver ever show us a lot of real, raw emotion. Not anger. We’ve all seen that plenty. Not celebratory joy. That’s what we see most, when the driver who has just pulled into Victory Lane finally shows us their face after it’s been hidden under a helmet for four hours. But by that time of revelation, they’ve typically already done all their real emoting when we couldn’t see them and what we get is the scripted, corporatized post-win photo and hat dance.

We never see tears. Ever. We might hear them, a quick choke of the throat caught over a racer’s radio transmission to their pit crew during the cooldown lap. But by the time that lap is done, the ice-in-their-veins drivers have long ago hit their temperament reset button and their once-wet eyes have completely dried.

Not being able to find a crack in that firewall of feeling has always been a bit maddening, particularly when it has come to Kyle Larson. But Sunday night at Phoenix Raceway, Larson, the just-crowned Cup Series champion, wept openly. Then he wept again. And again. In his car, caught on camera. On the pit lane during his live TV interview. In Victory Lane, amid celebrating the race win and the resulting championship. In the media center. During the late evening photo ops with the trophy.

“Just thinking about the journey and how tough of a road it’s been to get to this point for so long,” the 29-year-old explained when he was asked about what had produced so many repeated tears. “But especially the last year and a half.”

Larson has always been a master of the classic motorsports understated reaction. He has won hundreds of races across countless series and tracks, so once he started winning regularly in NASCAR’s Cup Series, the big leagues of American auto racing, he always stuck to the “act like you’ve been there” approach.

But where he has been over that past year and a half he keeps referring to, no racer has been before or since. A self-triggered trip into stock car purgatory, fired by Chip Ganassi Racing and banished from the NASCAR garage on April 13, 2020, for an inexplicable utterance of the N-word during a live broadcast of a pandemic lockdown video game competition.

On Nov. 8, 2020, Kyle Larson watched Chase Elliott celebrate winning the Cup no different than the rest of us, from a television in his living room. On Nov. 7, 2021, he outran now-teammate Elliott and three others to not only win NASCAR’s ultimate prize, he did so by way of the most dominant statistical season seen in nearly a decade and a half.

His 10 wins (11 if you include the non-points-paying NASCAR All-Star Race) was the most seen since Jimmie Johnson, also driving for Hendrick Motorsports, won that many races in 2007. He posted 20 top fives and 26 top 10s in 36 races, both first among all drivers, and his 2,581 laps led was nearly 1,100 more than the nearest competitor. He became only the seventh driver in 75 years of NASCAR racing to win a Cup Series title one year after not racing in the series full-time, and the first to do it since 1966.

What’s more, he also spent 2021 dominating the American short track scene at a level only matched by the likes of A.J. Foyt and drew comparisons from his Hendrick Motorsports boss, Jeff Gordon, to another auto racing cross-discipline demigod, Mario Andretti. From the Chili Bowl to the Knoxville Nationals to Sunday at Phoenix, it’s been an all-time Paul Bunyan-with-a-steering wheel type of season.

Now, what’s he going to do with all of that? Where will Larson, with “NASCAR Cup Series champion” forever affixed to his name, go from here? There are those who will say the answer to that question should be racing-only, that he has served his time of public shame and it’s time to move on.

But nothing with Larson will ever be that simple again.

To earn NASCAR reinstatement, he was required to spend 2020 undergoing sensitivity training, but he also chose to do more than was required. He traveled to see young Black racers that had once looked up to him as a hero and faced their questions of “Why would you say that word?” face to face. He was given history lessons on racial tensions in America by the people who run that program. Before the tears we saw at Phoenix on Sunday night, there were others we will never see, from those days in April 2020 when he called the likes of Bubba Wallace, Black members of his own race team, and then most painfully, his mother.

Janet Larson (née Miyata) is a Japanese-American woman who had been so proud of her son’s development, more easily embracing his Asian heritage as he grew into adulthood, researching his grandparents’ time in World War II internment camps and visiting youth centers to talk to Asian-American kids about his racing career. Now she was just mad.

NASCAR leadership continues to work to undo its once-well-earned reputation as a place unwilling to embrace diversity. That’s not what the garage is anymore. Anyone who was there years ago and is also there now, we are fully aware of the very different world that it has become. But there is still so much more work to do. Officials in business suits can only do so much. Ultimately, it will always be the racers in the firesuits who will have the greatest impact.

Larson has always been a tough nut to crack emotionally. As an interview subject, he has been downright maddening because he’d never allow himself to fully open up and dive as deeply into hard topics of conversation as it felt like he could if he would just give himself permission. Even when the subjects were his multiracial background or that he might be the first graduate of NASCAR’s Drive for Diversity program to win the Cup.

But Sunday night at Phoenix Raceway, amid the most meaningful racing celebration of a lifetime that is marked by trophy after trophy, Larson finally cracked a door into his emotions. He finally let us in.

His potential impact as an educator and a game-changer for the audience that watches the sport he loves more than most anyone? This part of the gig was not his dream. This is the burden he’ll always carry because of the nightmare, one of his own ignorant creation. But if he does what he could — what he should — he might very well make some racing dreams come true for someone who thought their race might keep them out of racing.

If he chooses to do nothing for the short-term sake of taking the path of least resistance, he would be lowering his visor to the long-term damage. Silence will only bolster those who see NASCAR as still stuck in 1968, the perceived free pass given to the driver who dropped the N-word and then won the championship one year later. But Larson owning it publicly and carrying it with him as prominently as a sponsor on a car hood is the only way to convince anyone that anything has actually changed.