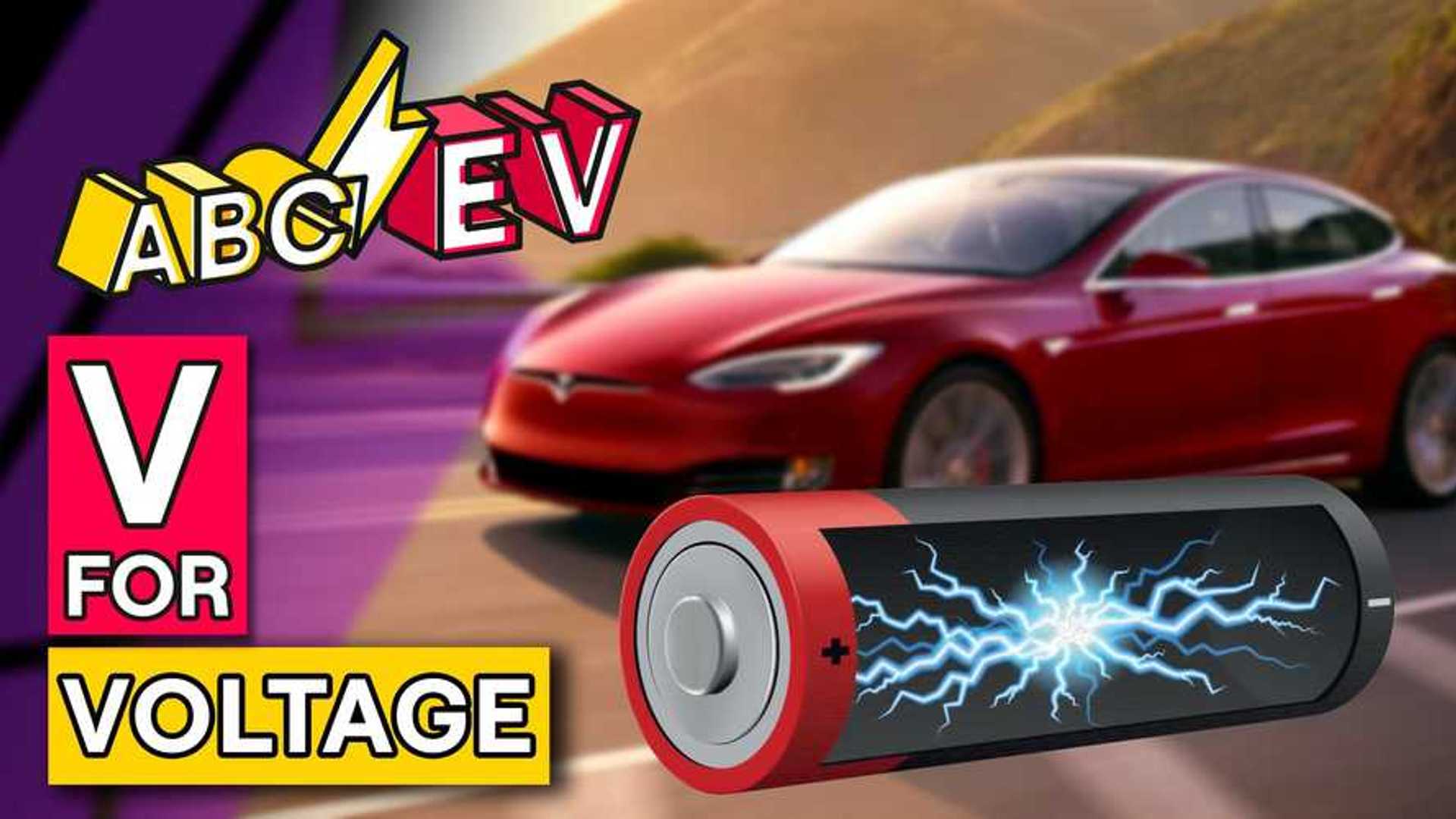 Hello again, and welcome back to another busy installment of the ABC of EVs. We’ve done a few videos in this series on batteries and some of the terminology such as amps, capacity and elements such as Cobalt. Today we’re turning our attention to voltage. Stay tuned for the details!

So we know from a previous video that electricity is the flow of electrons between atoms. These electrons can move about randomly. So we use voltage to push the electrons around a circuit. And when we have the electrons moving around in the desired direction…we get current! It’s this current that we used to power our devices such as lightbulbs…and our EVs!

Let’s take the analogy we used in a previous video and apply it here today again. Voltage is a bit like pressure in a water pipe. Let’s say you had a bucket of water with a pipe attached underneath. If the bucket of water is full, there will be a lot of pressure and the water will come out of the pipe quickly. If you reduce the amount of water in the bucket, you will get less pressure…and less water coming out of the pipe.

So let’s say we have a small battery cell with 1.5 volts. If you attach a wire to either end… at the negative and positive terminals, the electrons will flow along the circuit at 1.5 volts. We could then introduce something like a light bulb in our circuit. As the electrons flow through then we get light.

We could then place another battery in the circuit in series. The additional 1.5 volt battery now gives us a total of 3 volts to do work for us. So a bit like adding water to our bucket in the analogy to increase the pressure, we’re adding another 1.5 volt battery here. So more force pushing the electrons around the circuit.

But we can also add batteries in parallel, as opposed to in series like we just mentioned. This means that the flow of electrons will be split between the batteries. This doesn’t increase the voltage from 1.5 to 3. But rather it just splits the workload between the batteries. So our lightbulb still gets 1.5 volts but it lights for longer.

Now before we continue, it’s important to remind ourselves of the difference between volts and voltage. Voltage is the pressure. Volts is simply the unit that we use to measure this pressure.

So that’s a lot explained there that we don’t have to go over again. But we have been describing direct voltage so far. That is, current that flows in the one direction. But we also have alternating voltage. This is where the voltage alternates direction in the circuit. Of course this is where things might seem more familiar to you…AC and DC…or Direct Current and Alternating Current.
Voltage around the world

It’s worth noting that voltage in the sockets at home and work is not the same all over the world. Most countries operate at a level of about 220v to 240 volts. Noticeable exceptions are countries in North America and Japan that use in the region of 110 to 130 volts. So if you plugged an American device into a socket in Europe, it might just burn out as it can’t handle the voltage applied to it through the socket.

That’s enough of the science lessons…let’s move on to EVs, the real reason we’re all here!
So as you probably already know, an EV’s battery isn’t just one big lump of metal, or one big cell. In fact, it’s probably a few hundred individual cells that are connected in parallel and in series. Remember we mentioned that already. So manufacturers can connect a certain amount of the cells in series to achieve the desired level of voltage.

Let’s take a few examples to illustrate what we’re talking about. Most EVs on the road now have battery pack voltages in the region of 400volts…something like the Tesla Model 3 for example. But there are some manufacturers that have started rolling out 800volt systems. The Porsche Taycan will be the name that will spring to mind there. But more recently we’re seeing the likes of Hyundai and Kia making cars with nominal voltages around 800 with the EV6 and the IONIQ5.

The higher voltage allows more power to be transferred through the same diameter of wiring with less losses. However, it does have its downsides. A battery with a higher voltage rating needs extra componentry to allow it to charge on a DC charger that’s rated at less voltage. It’s also worth noting that a battery is only as good as the weakest cell in the series.
And before you go thinking that more voltage equals faster cars…that’s not necessarily true as it’s a whole lot more complicated than that. Just look at the likes of the Tesla Model 3 Performance…that’s pretty quick!

So that’s enough from us today folks, before we get bogged down in too much detail!
Is voltage and volts something you’ve thought about before when considering your EV, or maybe you just don’t care as long as your car gets you from A to B!