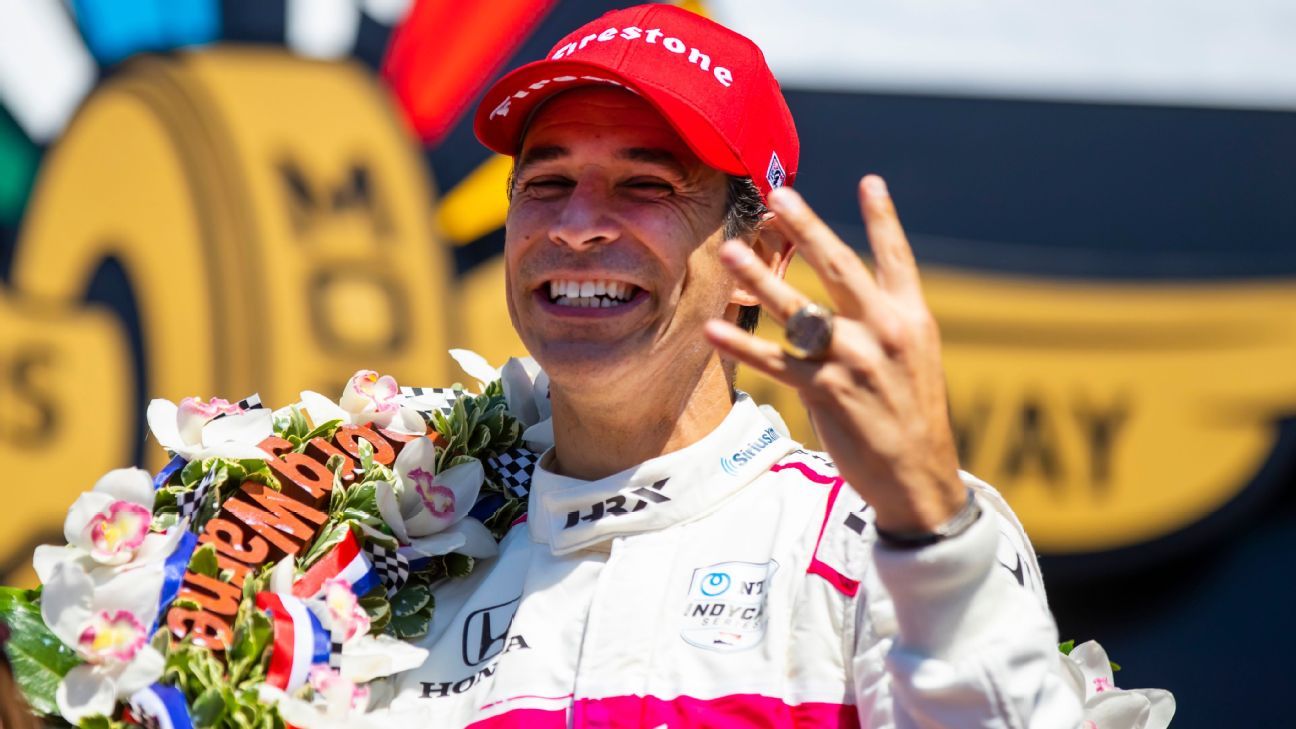 INDIANAPOLIS — On Saturday morning, roughly 24 hours before the start of the 2021 Indianapolis 500, an impromptu meeting of Indy’s most exclusive club took place as the drivers meeting of this year’s 33 competitors was being adjourned.

A.J. Foyt, Al Unser Sr. and Rick Mears, the only four-time winners over 104 years of the Greatest Spectacle in Racing, stood alongside the Borg-Warner Trophy, the award upon which their faces are sculpted a dozen times. As the Speedway’s holy triumvirate paused for a photo, someone shouted out, “No one will ever win four again!”

Mears, the last to join the group way back in 1991, quietly replied, “Don’t forget. Someone has a chance to do it tomorrow.”

That shouter had forgotten about Helio Castroneves. Heck, we had all forgotten about him, until we looked up on Sunday afternoon with six laps remaining and there he was, seizing the lead, and then he did it again for good with only one trip around the 2.5-mile rectangle left to run.

After he took the checkered flag, the 135,000 fans in attendance suddenly remembered how much they had loved him back in the day, as they watched Castroneves run the length of the world’s longest grandstand, soaking up their cheers. Dozens of them joined him when his muscle memory sent him climbing up the catchfence, as he did so long ago when he earned the nickname Spider-Man.

Now, the next time those three legends gather around that nine-foot silver trophy, they will do so with Helio Castroneves by their side.

“You get to that point in your career when people are nice to you, but they are also kind of feeling sorry for you,” Castroneves said to ESPN on Sunday afternoon, the winner’s wreath still around his neck and his lips blackened with tire residue after kissing the fabled yard of bricks at Indy’s start-finish line. “The people like you. They want you to win. But after the years go by and there are no wins to show for it, they definitely forget about you as a contender, until you give them a reason to remember you again. They will not be forgetting me after today.”

Our collective forgetfulness was not without good reason. Castroneves used to be the wonder boy of American open-wheel racing, but now he is 46. The driver he battled for this victory, Alex Palou, was 4 years old when Castroneves earned his first Indy 500 win in 2001. Castroneves used to be the odds-on favorite anytime the green flag was waved over Speedway, Indiana; but on Sunday, he was considered middle of the pack at best, a 30-1 shot by Las Vegas oddsmakers.

Castroneves used to drive for IndyCar’s juggernaut, Team Penske, an 18-time winner of the Indy 500. But four years ago, that team had relegated him to part-time IndyCar status, pushed into the relative purgatory of sports car racing without much public explanation as to why. Eventually, finally, they parted ways. But by then, he had won only one open-wheel event in six years and not at Indy for a dozen years.

This is the man who used to own the Indianapolis Motor Speedway. He won the race in his first two tries, 2001 and 2002, becoming the first back-to-back 500 winner since Unser did it in 1970 and 1971. He won it again in 2009, his sixth top-four finish in nine races. Over his first 10 Indy 500 starts, he had won three times, earned four poles and finished outside the top nine only once. In the middle of it all, he even won “Dancing with the Stars.”

That’s why his fourth sip of the Indy 500’s winner’s milk had once seemed like an inevitability. It wasn’t a question of if, but when. Then it became, well, when? Then, it went from a definite if to a never-gonna-happen, especially when he arrived for this Indy’s Month of May in a limited-season ride with Meyer Shank Racing, a sports car team that made its IndyCar debut only four years ago and had earned just one podium finish in 33 tries. Their arrangement was seen from the outside as an old guy playing out the string in an underfunded ride, a quixotic effort against a garage full of big-dollar superteams and super young talent.

“I never once saw it that way,” Castroneves said standing on the frontstretch Sunday afternoon, bristling at the description of his situation. “I saw someone in Michael [Shank] who promised me a chance to win this race, and I believed him.”

“He said to us, ‘If you give me what I need, we can win this race’ and I believed him,” recalled Shank, also bristling at any suggestion that his team is “small and poor.” “So, our goal with Helio was always simple: Give him what he said he needed, and then let him show us the way with that steering wheel in his hands.”

Now, the nomad driver and still new team have earned one win together — the biggest win of them all. Castroneves has earned not only the biggest win of his life but one of the biggest ever witnessed over 105 editions of the Greatest Spectacle in Racing. The fourth-oldest winner of the Indy 500 also won the fastest 500 ever run (190.690 mph). He dominated a bunch of kids to do it and in an instant went from “He’ll never win four of these” to “You think he can win five of these?”

The face of the racer formerly known as “H3lio” will join A.J., Big Al and his mentor Rocket Rick as the only men with four silver faces affixed to that trophy.

“He deserved it,” Foyt said of Castroneves. “He worked hard to get it, and he finally got it. It wasn’t given to him, and when someone works as hard as he did, I’m glad it happened for him. As I said, he deserved it.”

Mears, who is still an executive at Team Penske, said, “If we couldn’t win it, then we were pulling for Helio to do it.”

Unser, who was a big part of Sunday’s prerace ceremonies, ran into Castroneves at dinner at St. Elmo Steak House on Saturday night.

“Al told me he would be rooting for me to win today,” Castroneves said. “That was pretty cool.”

Judging from the ridiculously long line of people eager to shake his hand, hug his neck and even kiss his cheeks, there were a lot of people rooting for Castroneves to win on Sunday. About 135,000 of them, finally out of the house, finally free to attend a race and caught up in a trackwide ebullience that even the crustiest of Indy old-timers had to admit they’d never seen the likes of before.

Among them was the man who’d chosen to cut Castroneves from his race team’s roster. Roger Penske, now the owner of the Indianapolis Motor Speedway, was waiting with a smile for his former employee in the winner’s circle.

“The lesson is to never give up, no matter what Father Time or another race team might tell you,” Castroneves said before taking another drag of milk off the bottle he’d been toting around for nearly an hour after the checkered flag, like it had been milked from a cow fed off the Fountain of Youth. “Tom Brady, Phil Mickelson, me. Old guys, we rule. And I don’t think we are done yet, either.”