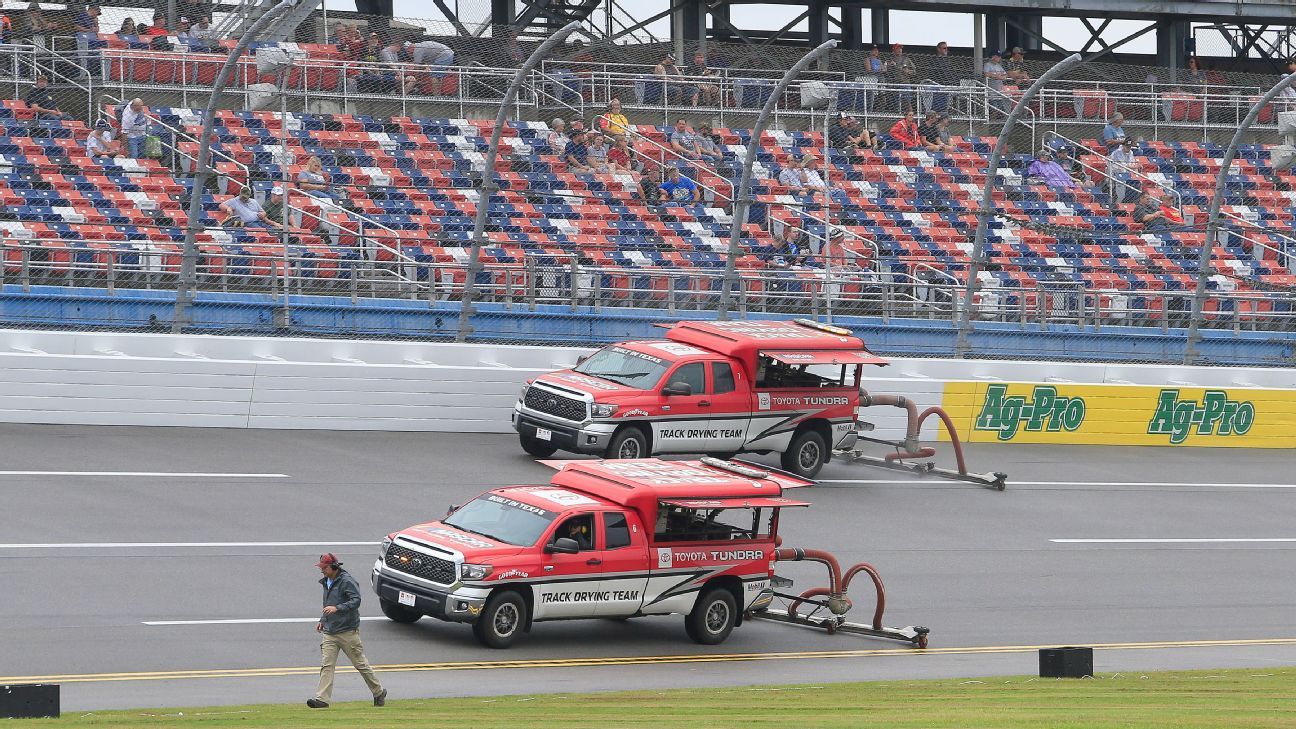 TALLADEGA, Ala. — NASCAR’s playoff race at Talladega Superspeedway was washed out and rescheduled for Monday because persistent rain backed the series into too tight of a window to run as scheduled.

The race was initially delayed almost two hours and NASCAR made one attempt Sunday at starting the 500-miler. But it began to rain again as the cars circled the 2.66-mile superspeedway behind the pace car.

Talladega does not have lights — the Xfinity Series race on Saturday ended six laps early because of impending darkness — and the lengthy delay meant NASCAR would flirt with sunset if it even started the race. Talladega’s 500 miles average a 3 hour, 41 minute runtime and NASCAR does not like to start a race unless it expects to run to completion.

Compounding the scheduling issue was that the Cup Series race was the lead-in to NBC’s airing Sunday night of Tom Brady’s return to New England, an NFL game that would have taken priority over the race. The rescheduled start is 1 p.m. Monday on NBC Sports Network.

Early weather reports called for rain in Alabama on Monday, as well. Same for Tuesday and part of Wednesday.

Talladega marks the middle race of the second round of NASCAR’s playoffs, with the hybrid road course/oval at Charlotte Motor Speedway scheduled as next week’s elimination race. The field of 12 playoff drivers will be whittled to eight at The Roval, and only Talladega pole sitter Denny Hamlin already has earned a berth into the third round.

Drivers have been on edge headed into Talladega because of the unpredictability of the 2.66-mile superspeedway and the risks of pack racing. Both the Truck Series race and Xfinity Series race doubleheader on Saturday were crash-marred and won by non-playoff drivers.

The Cup drivers don’t want the same aggressive racing because one wrong move can trigger a championship-ruining wreck.

“I’m going into a superspeedway race below the cutoff line, so it’s definitely a stressful weekend,” Alex Bowman, ranked 11th out of 12 drivers, said Sunday. “We’re going to race to win, right? That’s our game plan.”

NASCAR and NBC were in early discussions on how to mitigate crowd ambiance after spectators at Talladega on Saturday chanted an expletive directed at President Joe Biden that was picked up on air during winner Brandon Brown’s interview.

The race winner typically stops on the frontstretch to collect the checkered flag and then do a live interview. The chants Saturday at Talladega, where a convoy of trucks and motorcycles waved Confederate flags as they paraded past the main entrance on Speedway Boulevard, could be heard over Brown’s interview.

Ideas being discussed were to move the interview away from the grandstand fence in an effort to diminish the ambient noise.