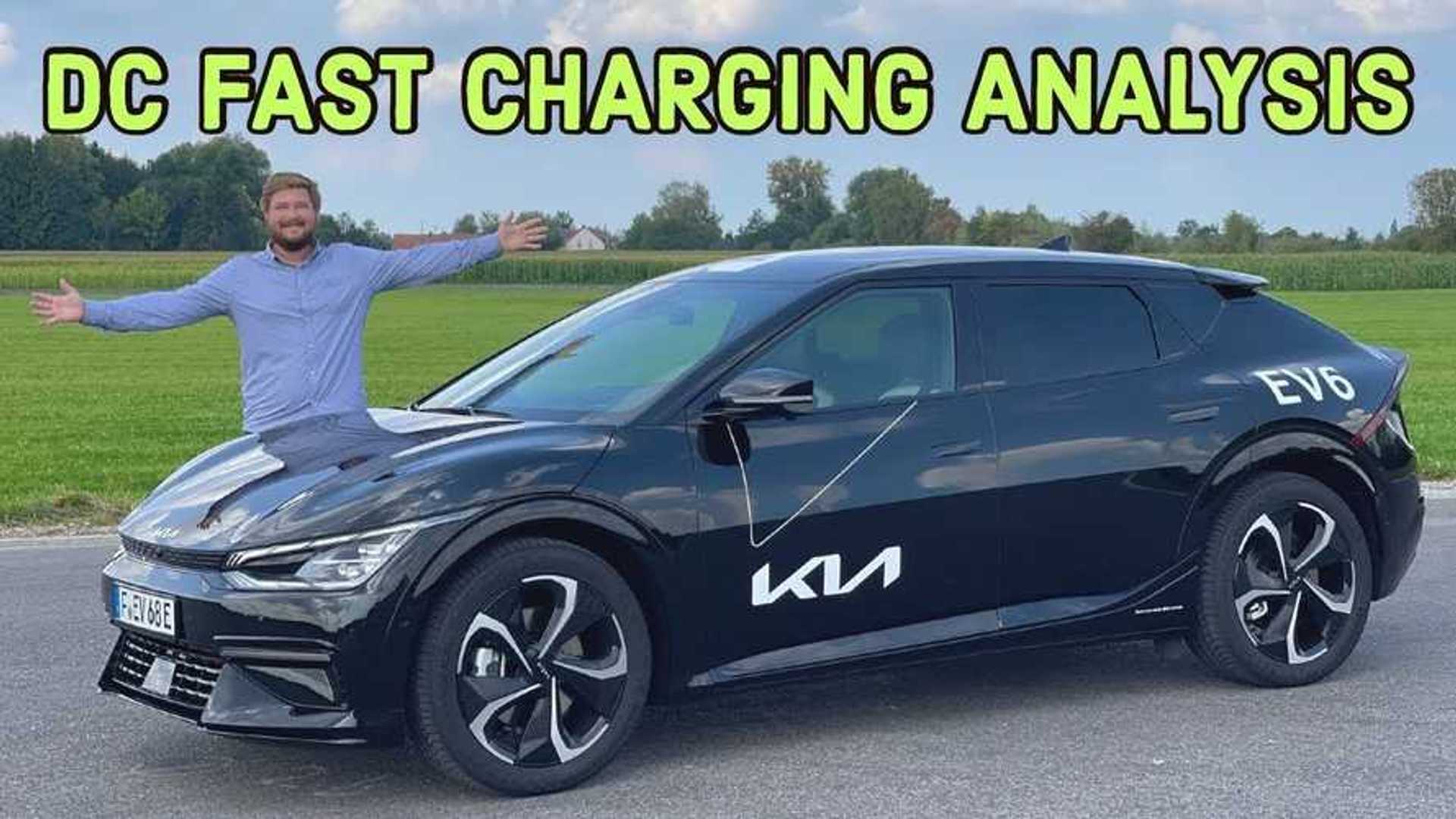 Today we will take a look at the fast charging capability of a pre-production prototype of the upcoming Kia EV6, which earlier this month was tested by Out of Spec Reviews‘ Kyle Conner in Germany.

The Kia EV6 is based on the same E-GMP platform as the Hyundai Ioniq 5, which is a fast charging titan, so we expect a similarly great performance from the EV6 as well.

Kyle Conner conducted multiple tests at IONITY fast chargers, noting a highly volatile charging curve (even more volatile than in the Hyundai Ioniq 5). The first one, on which we will focus, is the 0-100% State of Charge (SOC) test with a pre-conditioned battery temperature. The second one in the video, starts at 40% SOC.

Let’s get into details.

The test reveals that the charging power almost immediately starts to increase above 200 kW, before even reaching 2% SOC. That’s really awesome, especially since the highest power output was maintained up to about 46% SOC.

We assume that the hardware and software in the pre-production prototype of the Kia EV6 is simply raw and over-sensitive to temperatures inside the battery pack. If Kia manages to smooth the charging curve, so it would gradually decrease from 46% SOC, it will be one of the best on the market right now.

Depending on the starting point and initial battery temperature, the charging curve might vary.

The weak point is the 82% SOC, when the car stuck for 4 minutes or so at 6 kW. An obvious thing to improve in the production version.

The chart below is only for illustrative purposes:

That’s already one of the best results on the market and we assume it will be noticeably better in the production car (at least 170 kW). 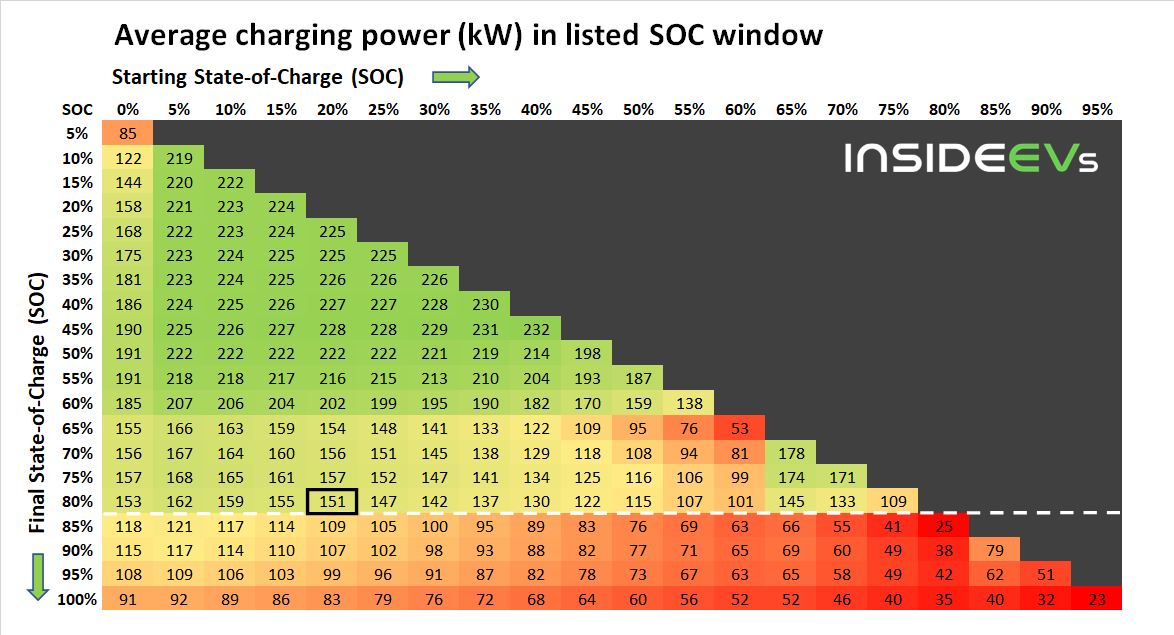 Kia says that the EV6 is equipped with a 77.4 kWh but does not explain whether it’s usable or total capacity. The charger indicates that the car consumed 81.6 kWh, which might be 77.4 kWh of usable capacity and 4.2 kWh of losses (95% efficiency). If the 77.4 kWh would be the total value and the net capacity would be lower, then it would mean that the losses are even higher, like 8 kWh or 10% (sounds high).

For the sake of today’s analysis,we will assume that the total battery capacity is 82 kWh and 77.4 kWh is net usable.

The peak C-rate* – charging power in relation to the total battery capacity of 82 kWh – would be over 2.8C. The average C-rate when charging from 20% to 80% SOC is 1.85C. Those are among the highest values in the industry.

The tested prototype is an AWD car (the RWD is expected to have 4% more range and thus 4% higher range replenishing speed).

The average result here is one of the best and might improve to the Hyundai Ioniq 5 level after the charging curve is improved.

Comparisons with other EVs

As the tested Kia EV6 is a prototype, we will take a look only at the comparison with the Hyundai Ioniq 5 (72.6 kWh battery version) – the one tested by Battery Life and by Hyundai itself (demo).

We complained a little bit about the dips in the Hyundai Ioniq 5’s charging curve, but in the pre-production prototype of the Kia EV6 it’s even worse.

On the other hand, the EV6 has  much better charging output in the beginning! Assuming that the red line will be smoothened, the Kia EV6 has clear potential to beat the Hyundai Ioniq 5. 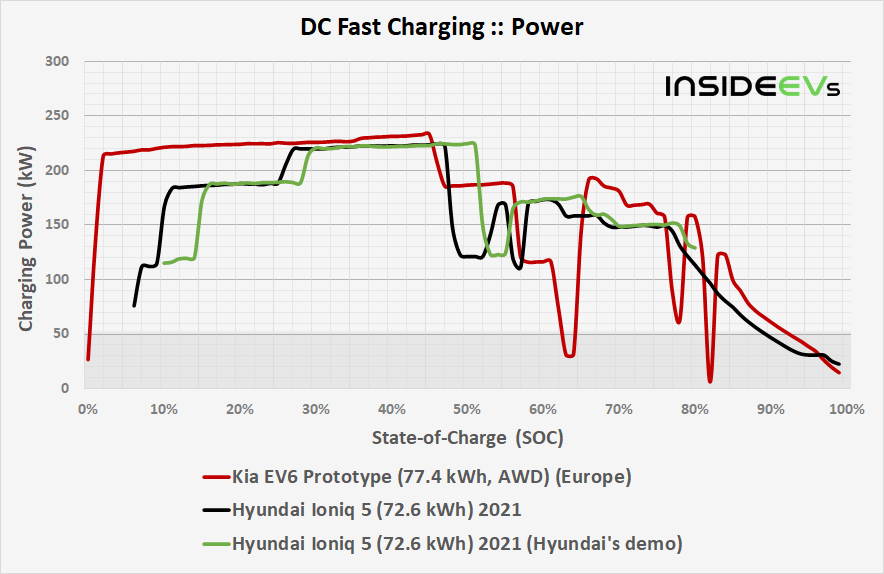 As of today, the average power in the 20-80% SOC window is better in the Hyundai Ioniq 5:

The C-rate comparison is tricky, as we don’t know for sure the total battery capacity number, but it appears that they are comparable. 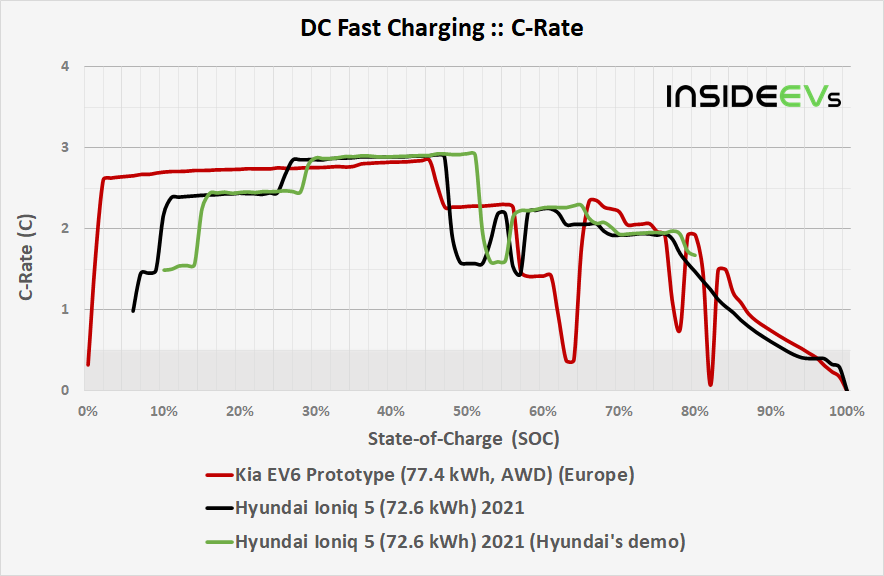 The Kia EV6 replenishes range faster than the Hyundai Ioniq 5, but then is affected by the quirks in the charging curve. 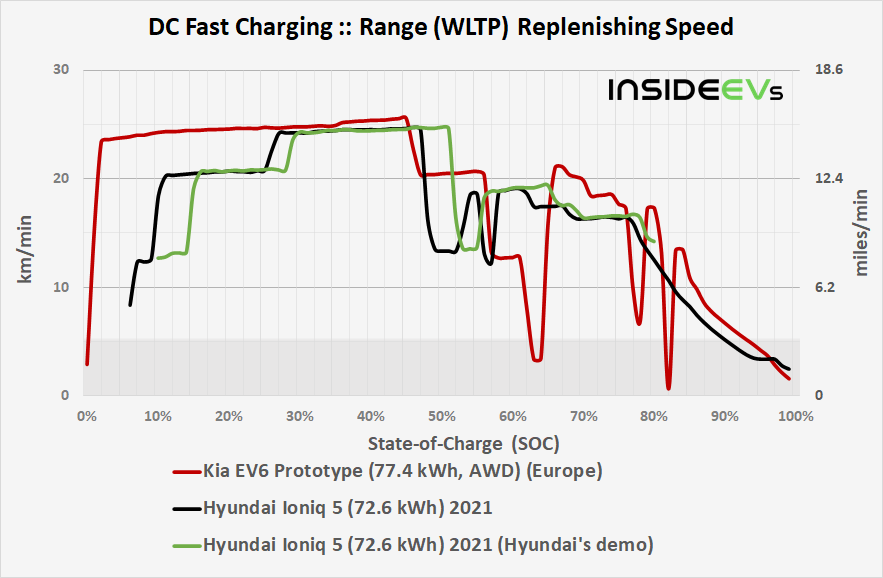 Overall, in the 20-80% SOC window, Kia EV6 is slower than the Hyundai Ioniq 5, but with a potential to be quicker in the final production version.

Overall, the Kia EV6 in its pre-production prototype version appears to be a diamond that needs to be polished. The charging results are already very good.

If the manufacturer will tweak the charging system, which is probably over-sensitive to battery temperatures (or voltage), it should become state-of-the-art in terms of charging speed, at least on par with the Hyundai Ioniq 5.

We look forward to test and analyze the final product that in Europe and South Korea will be delivered to customers .

* Some values on the charts are estimated from the data source.

** Temperature of the battery cells might highly negatively affect charging capabilities. We don’t have data about temperatures of the battery at the beginning and during the charging process. In cold or hot weather, as well as after driving very dynamically, charging power might be significantly lower than shown on the charts (in extreme cases charging might be impossible until the battery temperature will not return to an acceptable level).