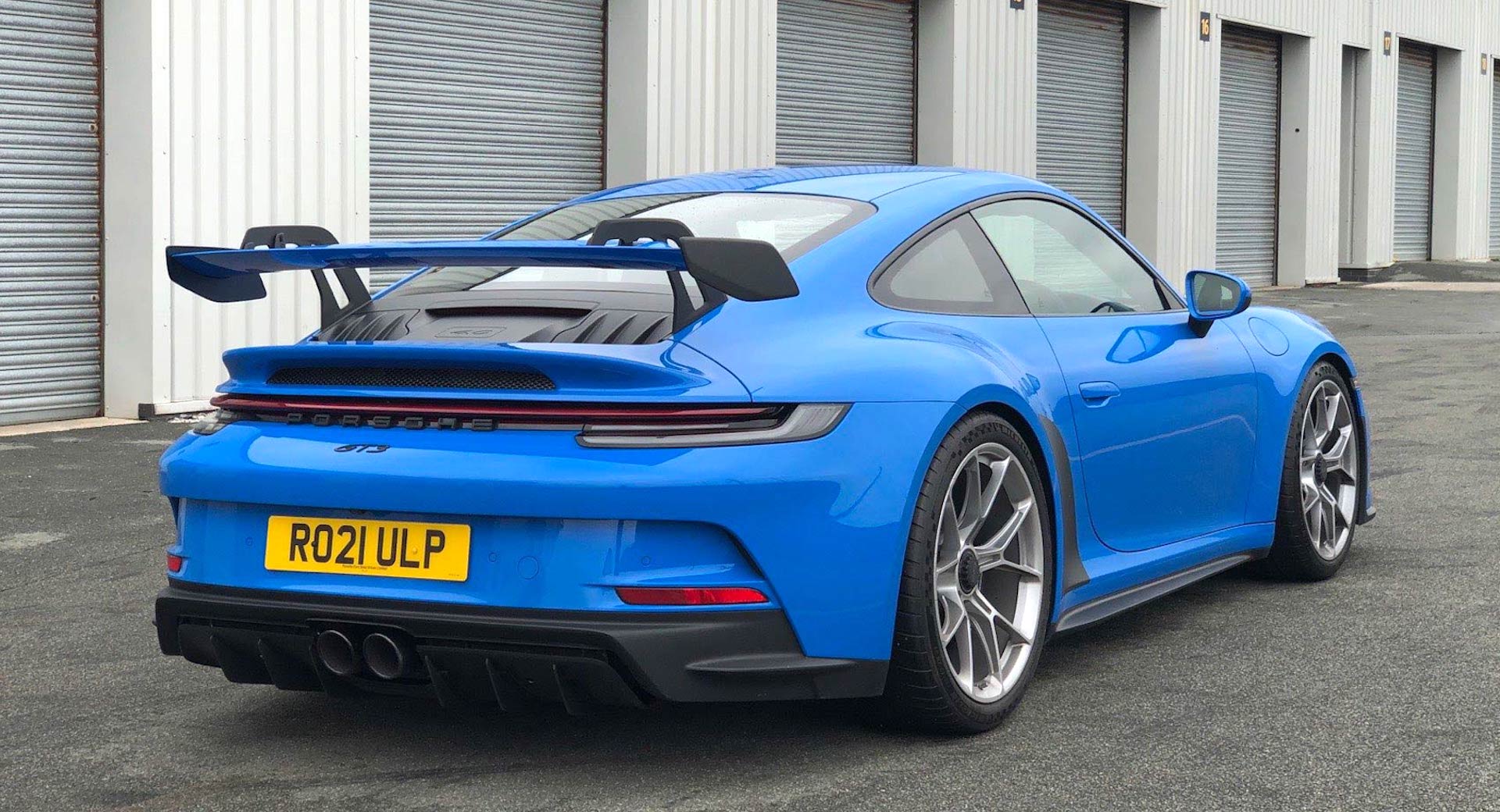 Porsche’s 911 GT3 has always punched further above its weight than a 130 lbs IT geek with a supermodel girlfriend. It’s not the fastest or most powerful sports car quite a lot of money buys, but it is always among the best to drive.

But if the 991.2-generation GT3 was so fantastic, can Porsche really make the 992 version tangibly more exciting, and if yes, what’s the cost, financial and otherwise? We grabbed some seat time on both road and track to find out.

Powerful, naturally-aspirated, manual-shift sports cars are thinner on the ground than grass shoots in the Sahara, but most of us were pleased to discover Porsche has carried over the recipe from the previous car. You still get a 4.0-liter naturally aspirated flat-six, and you still get the option of a seven-speed PDK dual-clutch gearbox (other PDK-equipped 992s get an eight-speeder) or a six-speed manual.

Compared to its predecessor, power climbs by a fairly inconsequential 10 hp to 503 hp, and torque by 7 lbs ft to 347 lbs ft, and journeys to the rear wheels though a limited slip differential. 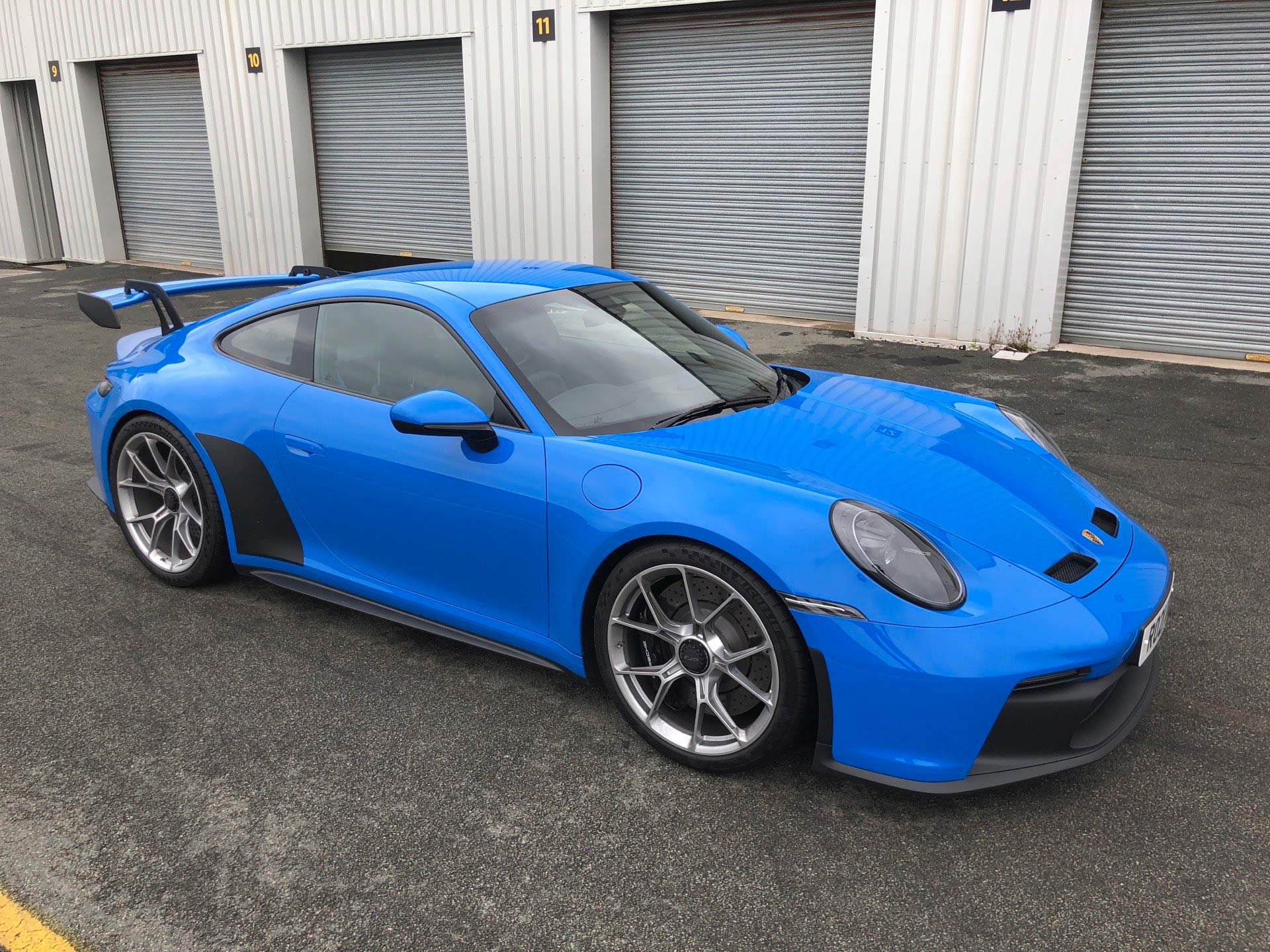 Big Changes On The Skin, And Under It

So far, so similar, but this is no simple facelift. Like other 992s, the GT3 adopts the full-width light bar across the rear, but more obviously it now features a large dark plastic section in the lower bumper, a pair of scallops in the carbon-fiber hood , and a rear wing that, unless you’re a committed motorsports fan and you’ve seen these devices before, you’ll swear has been bolted on upside down.

Porsche says the reshaped wing, which is now fixed to the uprights on its upper, not lower surface, and front splitter and rear diffuser are together capable of generating almost 850 lbs (385 kg) of downforce. That’s almost like carrying a Caterham 7 on your luggage rack.

Struts Out, Wishbones In 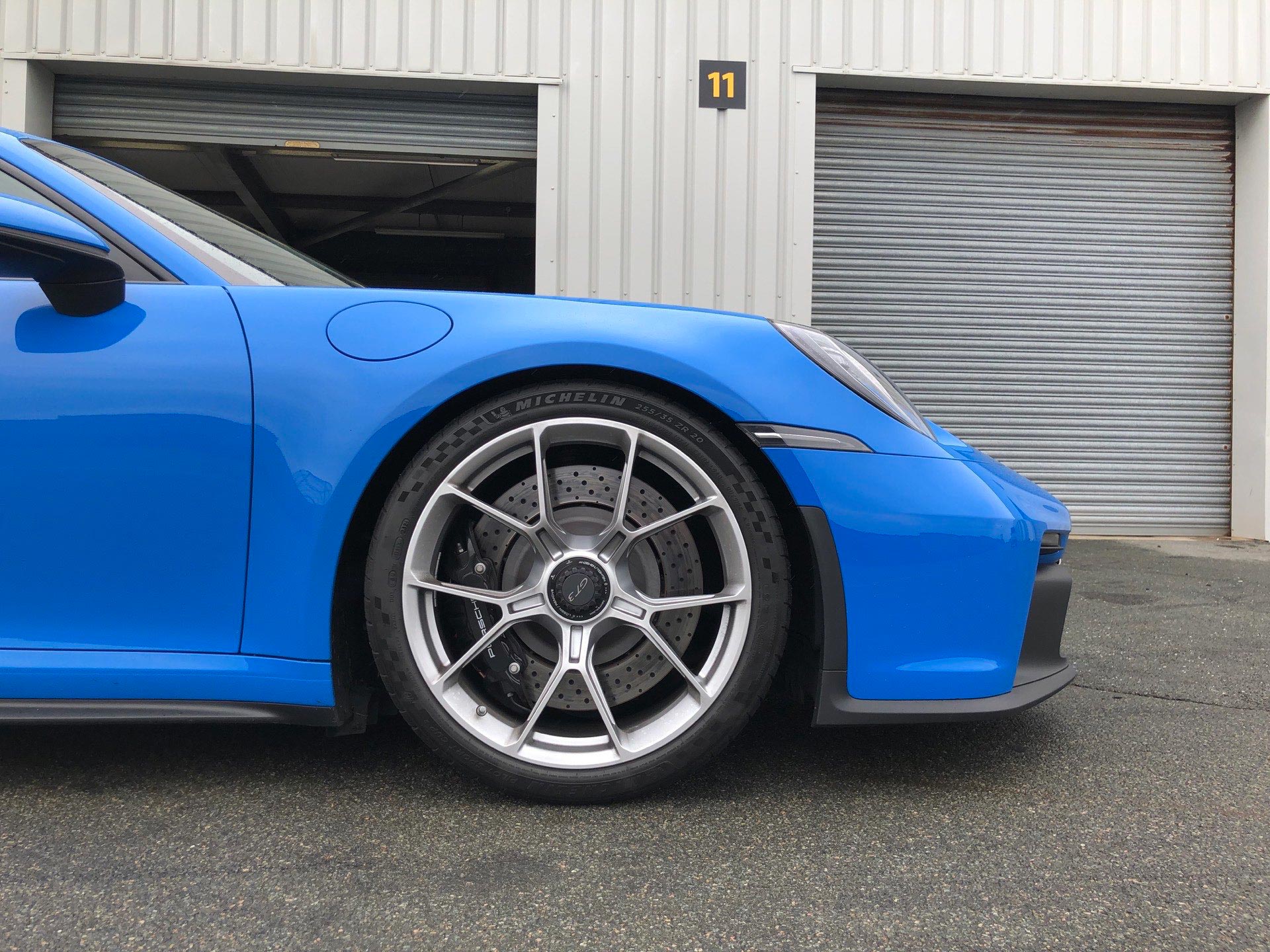 The biggest change by far though, is one you can’t see, at least not topside. Unlike lesser 911s, the 2022 GT3 dispenses with its MacPherson strut suspension in favor of a double wishbone setup, like the company’s proper racers.

It comes as no surprise, then, to discover it’s even more capable on track than last years car, a machine that was hardly wanting in any dynamic area. Porsche’s own figures say the new GT3 can lap the Nürburgring Nordschleife in 6:55.2, or nearly 20 seconds quicker than the old one in the hands of an expert driver.

And in the hands of a mere mortal, it feels like it grips harder and offers even more stability, giving you more confidence to push. There’s a little understeer if you push too hard, and while it might look faintly terrifying from the outside with all those wings, it’s incredibly tolerant if you want to go in hot on a trailing throttle and then climb back on the gas to edge the rear tires wide. But it’s easy to stay between those extremes, and that’s where you’ll have most fun.

Every Control Is A Communication Masterclass

The overriding sensation is the incredible feedback you get from every one of the GT3’s controls. The steering is perfectly geared and weighted (though I have heard other people say they think it’s too light) and tickles your hands with the kind of road feel new cars seldom deliver. Likewise the brakes ($9210/£6498 optional carbon ceramics on the car I drove) and throttle are so precise you never have any excuse for applying to much or too little pressure to either. Even the manual shift, which I remember as sometimes feeling slighty too stiff and weighty on previous GT3s, seems easier to stir this time.

Even if the GT3 handled like a MkIV Lincoln Continental on retreads, it would still be worth buying for the engine alone. The extra 10 hp for 2022 is more than lost to an 11 lbs (5 kg) increase in curb weight to 3126 lbs (1418 kg) in manual spec, meaning the 3.7-second 0-60mph time (3.2 with the PDK) represents no real improvement on the previous car’s straight line performance. But do you really care?

Related: Tom Cruise Engages In Dogfight In A 911 GT3 With Mark Webber And David Coulthard

We don’t. The 4.0-liter flat-six proves yet again that what makes a sports car exciting isn’t necessarily the amount of power on tap, provided there’s enough to excite, but how it’s delivered and the noise it makes. Listen to this GT3 wail as it homes in on the 9000 rpm limiter before you grab another gear (with your whole arm, not just your finger in the manual version) and you’ll not care that some electric sedan can go quicker.

A Simple Cabin, But Still Comfortable 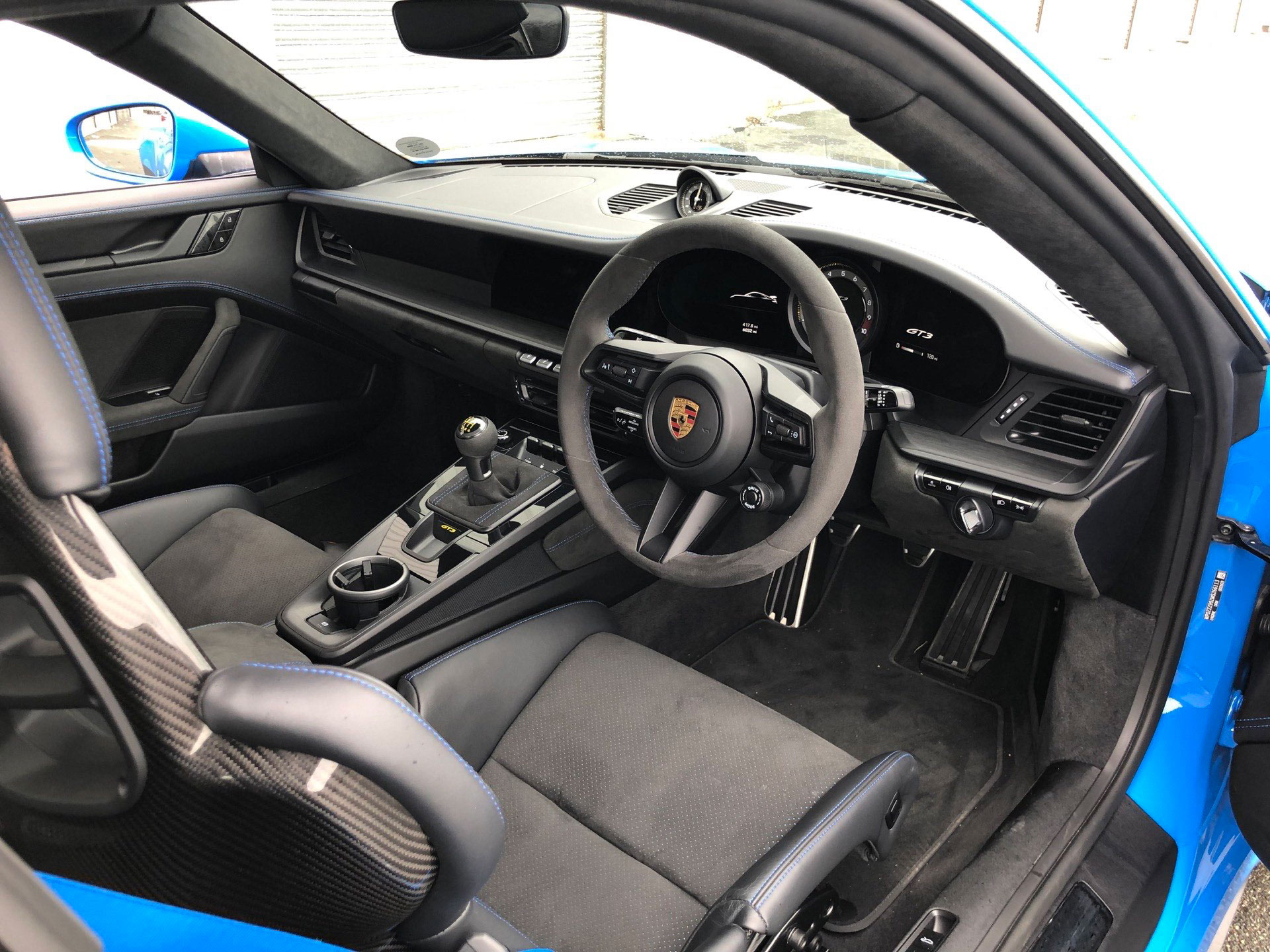 Beyond the updated suspension, one of the biggest upgrades to this year’s GT3 is the interior, which shares the radically overhauled dashboard, console and instrument cluster that arrived with the 992 generation. The one thing it doesn’t share in PDK guise is the stubby gear selector fitted to paddle-shift Carreras, with the GT3 getting a more conventional push-pull shifter instead.

The instrument panel comprises mostly of digital screens, with an anologue rev counter at its center, and our car had the optional ($5900/£3788) carbon-shell bucket seats. They look fantastic and the support is excellent, but they can feel a little restrictive on your upper body for road use, and they definitely restrict access to the huge and potentially useful storage area left by the removal of the back seats.

Not So comfortable On The Road 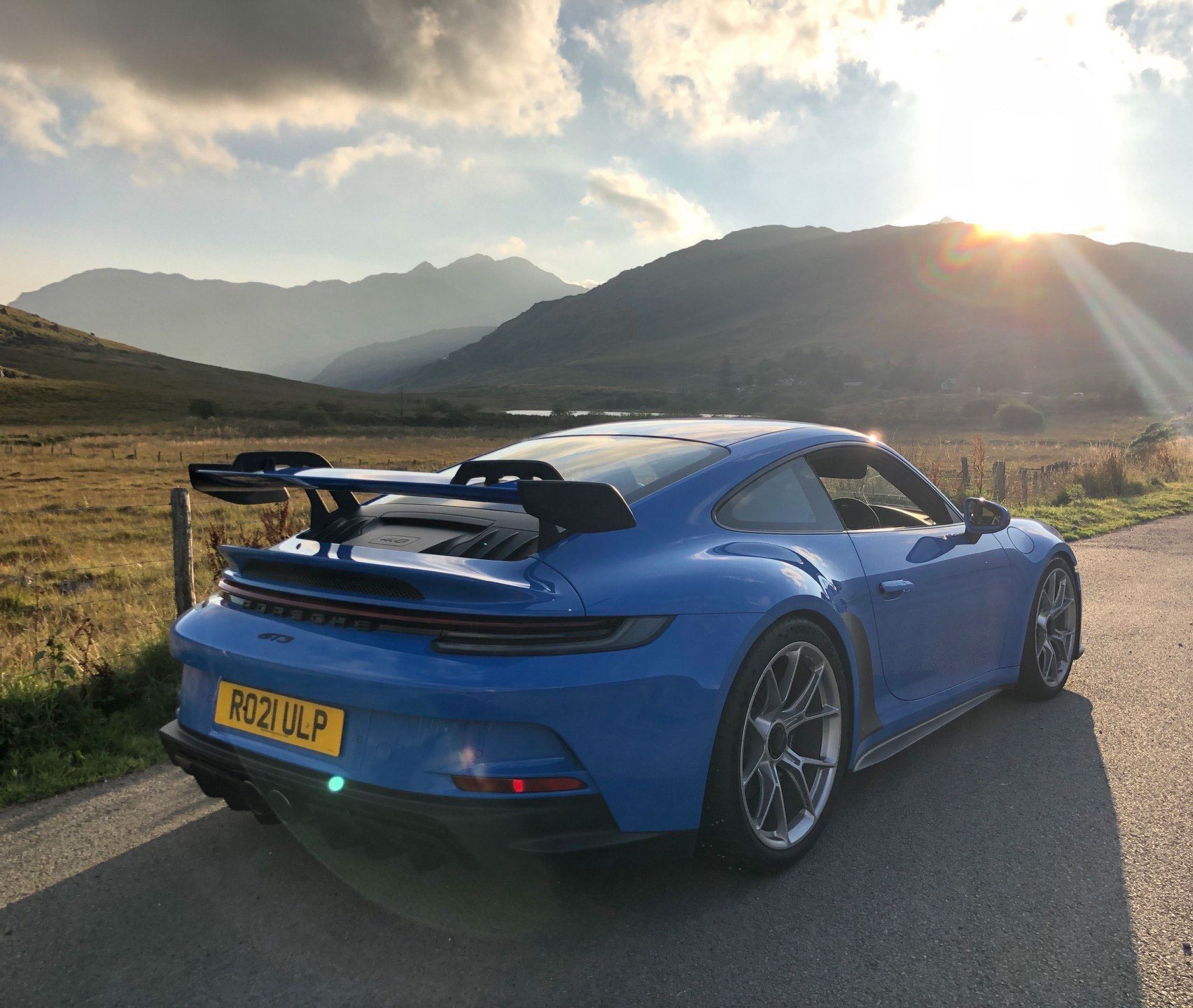 The GT3’s fairly compact 79.8-inch (2027 mm) width and great all-round visibility make it a cinch to place on even the narrowest roads compared to your average supercar. Combine those strengths with the usefully large frunk, the storage space behind the front seats and the much improved wet weather performance of the latest Michelin Pilot Sport Cup 2 tires, and it has the makings of a spectacular track toy that can also double as a road car, just as the all recent GT3s can.

Related: New Porsche 911 GT3 Touring Is Even More Immersive With The Six-Speed Manual

But this latest version has definitely sacrificed a little road refinement in the pursuit of extra dynamic ability. It’s still entirely useable, and many might think it worth the payoff for the improved steering and response. But this GT3 definitely feels harder and harsher, more like a GT3 RS, or like the very first 996 GT3 felt relative to a Carrera of the time. If you do intend to spend most of your seat time on the street, you might be better served ordering the recently announced Touring version of the GT3.

What Does It Cost? What’s It Up Against? 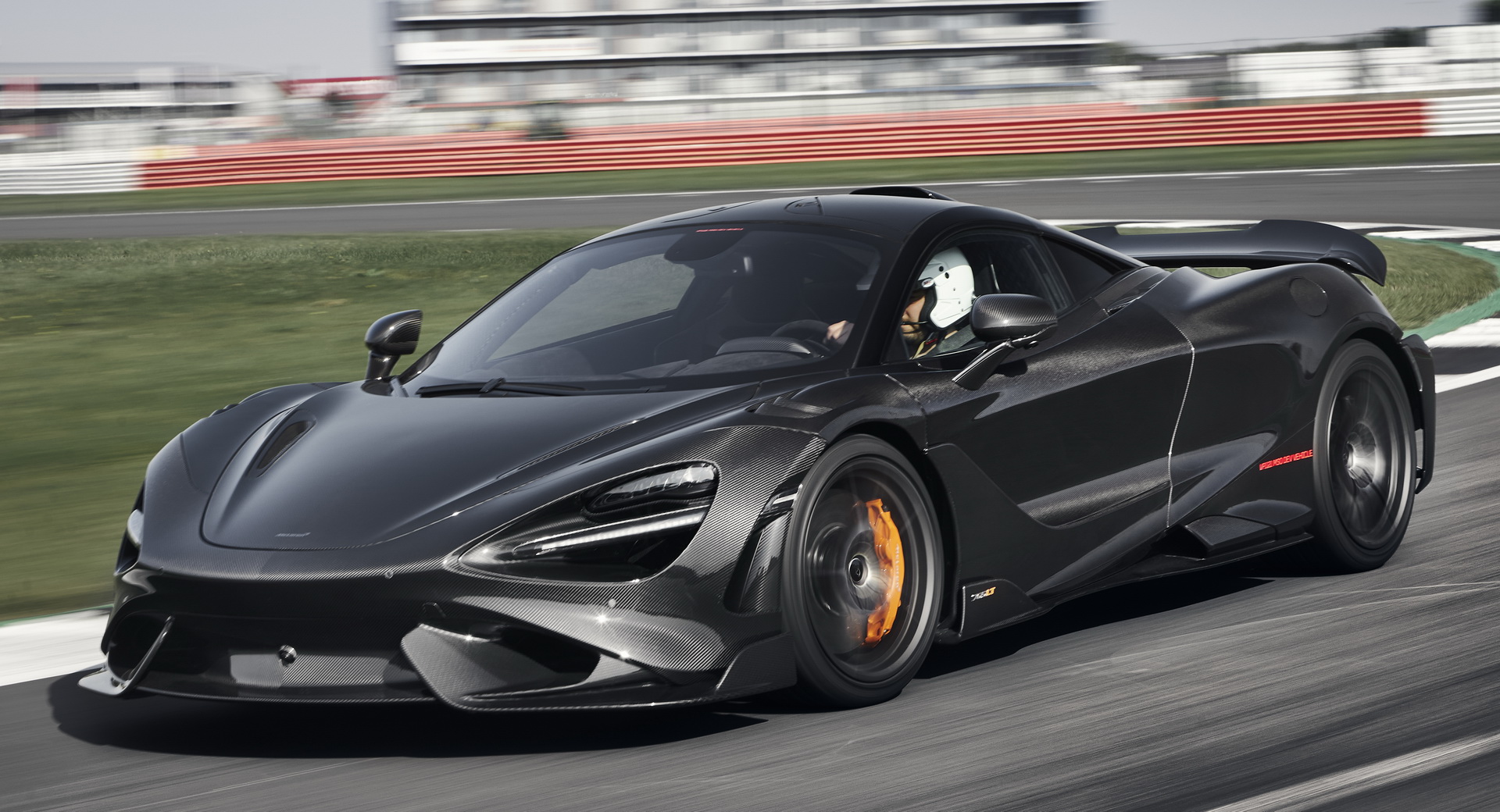 But to find a car that comes close to delivering a driving experience and an engine this special you’re looking at spending double what Porsche charges for this GT3. Something like a Lamborghini Huracan STO or Mclaren 765 LT. And neither of these two is available with a manual transmission. We’d probably go for the more rounded Touring version, but for some buyers this GT3 ticks every box. And here’s a final thought. This is the regular GT3 – and there’s a 911 GT3 RS still to come…