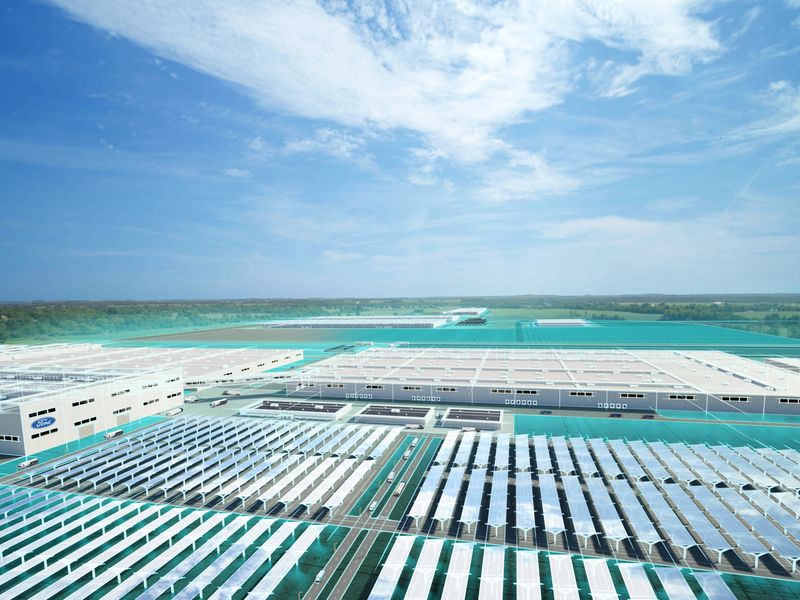 DETROIT — Ford Motor Co., in what it says is the largest single manufacturing investment in its 118-year history, on Monday said it would spend $7 billion and create nearly 11,000 jobs to build electric vehicles and batteries in Tennessee and Kentucky.

The investment, meant to vault Ford among the leaders in EV output, will include a 3,600-acre “mega campus” northeast of Memphis called Blue Oval City that will include Ford’s first new vehicle assembly plant in more than 50 years. The site — three times the size of the automaker’s sprawling Rouge Complex in Michigan — will hire about 6,000 people to assemble next-generation electric F-Series pickups and include battery cell production and a supplier park, Ford said. It’s expected to open in 2025.

South of Louisville, Ford will build a 1,500-acre battery park under its BlueOvalSK joint venture with battery supplier SK Innovation. The site will comprise two battery plants making advanced lithium ion batteries, with one opening in 2025 and the other in 2026. Ford said the Kentucky site will create 5,000 jobs.

SK Innovation is committing $4.4 billion on the projects, bringing the total investment to $11.4 billion, Ford said. Ford formed a partnership with SK Innovation in May after CEO Jim Farley reversed plans by his predecessor to buy batteries from outside suppliers, choosing to instead produce them in-house.

Ford said the two campuses will have annual battery production capacity of 129 gigawatt hours, which is enough to power 1 million EVs. The Tennessee battery plant will be dedicated to the next-generation F-Series, while the twin plants in Kentucky will make batteries for numerous Ford and Lincoln vehicles, the company said.

“This is a transformative moment where Ford will lead America’s transition to electric vehicles and usher in a new era of clean, carbon-neutral manufacturing,” Ford Executive Chair Bill Ford said in a statement. “With this investment and a spirit of innovation, we can achieve goals once thought mutually exclusive – protect our planet, build great electric vehicles Americans will love and contribute to our nation’s prosperity.”

The latest outlay is part of the $30 billion that Ford has pledged to spend on electrification through 2025. Additionally, Ford said it’s investing $525 million, including $90 million in Texas, to train dealership technicians in how to service EVs.

“It’s a huge deal for us,” Lisa Drake, Ford’s North America COO, told Automotive News. “We’ve been working on this, frankly, for about a year. To see it all come together the way it has is just beyond exciting.”

Blue Oval City in Tennessee, a $5.6 billion project, will spread out over six square miles. Ford said the site would be vertically integrated similar to the Rouge Complex.

The assembly plant, which is Ford’s first new greenfield plant since Kentucky Truck opened in 1969, will be carbon-neutral and built with the potential to use geothermal, solar and wind power, Ford said.

“This is intended to be an incredibly efficient ecosystem,” Drake said. “It doesn’t matter much if you build an EV if you’re not as conscious about how you’re building it. The whole site layout and environment is just as important as the product we’re building.”

Officials declined to say whether the trucks built there starting in 2025 would be F-150s or Super Duty pickups, but they said it will allow the company to “reach new customers with an expanded electric truck lineup.” It will feature the company’s new, dedicated EV architecture unveiled in May.

The automaker plans to begin selling an electric F-150 next year, although its architecture will largely mimic the current gasoline-powered pickup. The company has taken 150,000 reservations for the truck in the form of refundable deposits.

Drake said Ford viewed the future vehicle production at the Tennessee assembly plant as incremental to the internal combustion F-150s currently built in Missouri and Michigan, as well as the electric F-150 Lightning, which also will be made in Michigan.

The Blue Oval City campus will include room for Redwood Materials, a battery-recycling company created by Tesla co-founder JB Straubel. Ford this month announced a partnership with Redwood to recycle EV battery components and eventually use recycled parts in future products.

Drake said Ford plans to begin hiring for salaried positions in Kentucky and Tennessee immediately and will begin to fill hourly positions closer to the plants’ openings.

Because the Kentucky battery plants will be part of a joint venture, she said it will be up to that entity and its workers to determine whether the plant is unionized. Drake said she expected the automaker’s strong relationship with the UAW to continue in Tennessee.

“We do need to modernize some of our agreements, but we’re looking forward to a really successful relationship with them in Tennessee,” Drake said. “At the end of the day, the employees in the facility will have to choose how they want to organize.”

“The UAW has always taken a lead in manufacturing innovation with our employer partners,” he said. “We look forward to reaching out and helping develop this new workforce to build these world class vehicles and battery components.”