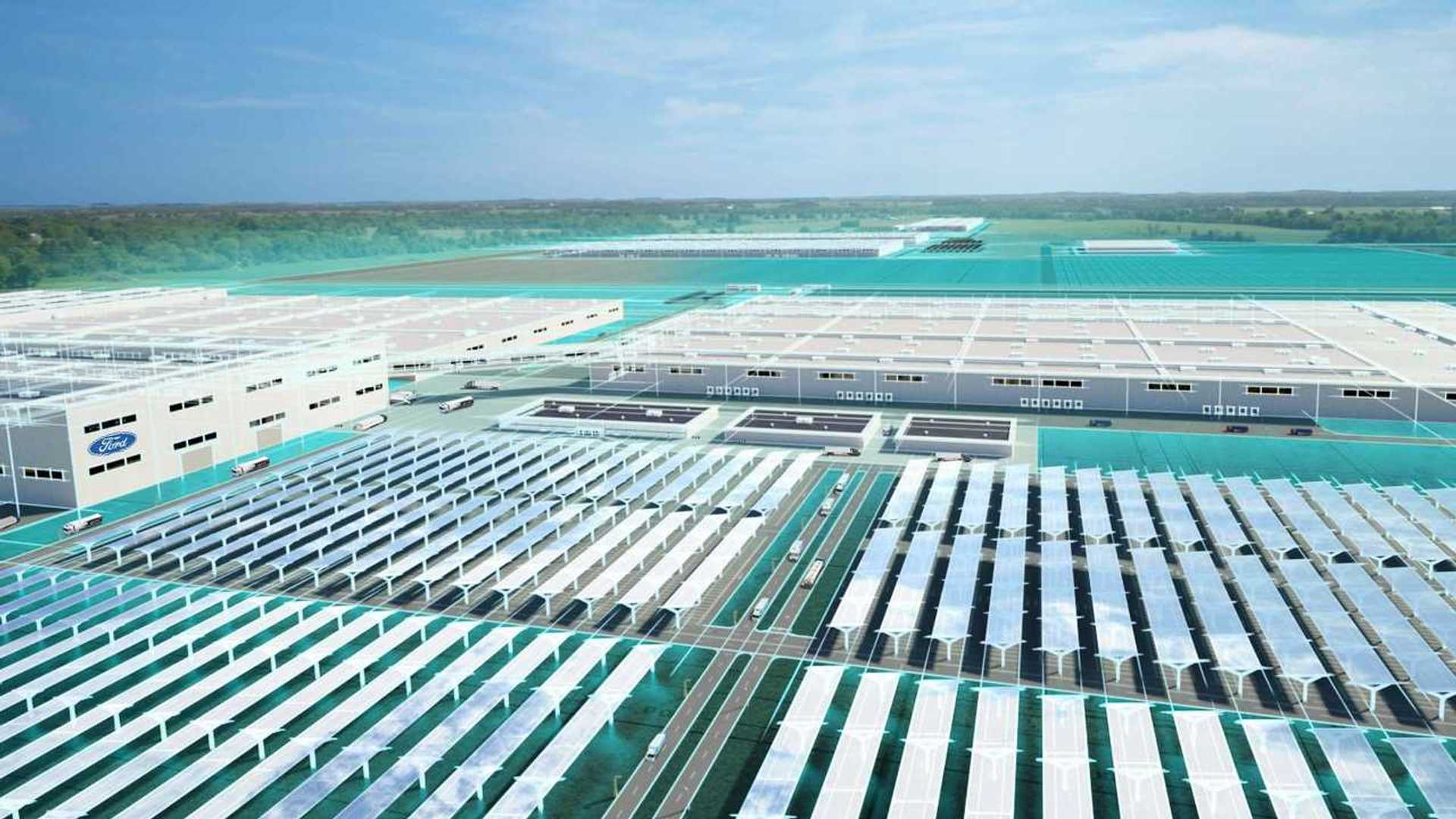 Ford has announced that it will lead America’s shift to electric vehicles with two new massive investments in the U.S.

Together with its battery partner, SK Innovation, Ford will build manufacturing campuses – “mega-sites” – in Tennessee and Kentucky that will produce the next generation of electric F-Series trucks and the batteries (three gigafactories – total of 129 GWh annually) to power future electric Ford and Lincoln. Production will start in 2025.

The total investment is estimated at $11.4 billion ($7 billion directly from Ford) and will result in 11,000 jobs. The remaining $4.4 billion will come from SK Innovation, which is a joint venture partner in BlueOvalSK announced in May.

Let’s get into the details of each site.

According to Ford, the Blue Oval City will be the largest, most advanced and most efficient auto production complex in its 118-year history. An important thing at this site will be vertical integration of production, starting with battery cells up to the final assembly of the vehicles.

The site will produce the next-generation electric F-Series pickups (beyond the Ford F-150 Lightning that will be produced at the Ford Rouge Electric Vehicle Center in Dearborn, Michigan starting in early 2022), as well as lithium-ion batteries. The BlueOvalSK gigafactory will have a capacity of 43 GWh cells annually.

The investment is estimated at $5.6 billion total, while the number of jobs will reach 6,000. The cost of the battery gigafactory will be shared with SK Innovation, through the BlueOvalSK joint venture.

“The 3,600-acre campus covering nearly 6 square miles will encompass vehicle assembly, battery production and a supplier park in a vertically integrated system that delivers cost efficiency while minimizing the carbon footprint of the manufacturing process. The assembly plant will use always-on cloud-connected technologies to drive vast improvements in quality and productivity. The mega campus is designed to add more sustainability solutions, including the potential to use local renewable energy sources such as geothermal, solar and wind power.”

Ford does not reveal which F-Series trucks are coming (the lineup to be expanded by electric models), but at this scale, it might be the electrification of basically the entire lineup.

The company notes also the environmental impact of the site to be minimal:

Through an on-site wastewater treatment plant, the assembly plant aspires to make zero freshwater withdrawals for assembly processes by incorporating water reuse and recycling systems. Zero-waste-to-landfill processes will capture materials and production scrap at an on-site materials collection center to sort and route materials for recycling or processing either at the plant or at off-site facilities once the plant is operational.

Ford is collaborating with Redwood Materials, a leading battery materials company, to make electric vehicles more sustainable and affordable for Americans by localizing the supply chain network, creating recycling options for scrap and end-of-life vehicles, and ramping up lithium-ion recycling. Ford believes battery recycling is essential for the success of an electrified future and has the potential to offer significant economic benefits as well as help solve for end-of-life battery recycling.”

Its total output will be 86 GWh of batteries annually (and 129 GWh annually, together with the Blue Oval City).

This investment is estimated at $5.8 billion (the single largest investment in the history of our state) and will be shared between Ford and SK Innovation, through the BlueOvalSK joint venture.

“Investments in the new Tennessee and Kentucky battery plants are planned to be made via BlueOvalSK, a new joint venture to be formed by Ford and SK Innovation, subject to definitive agreements, regulatory approvals and other conditions.”

Ford is not hiding excitement as they are going all-in into EVs right now with an expectation to achieve 40-50% of fully electric vehicles out of the overall volume globally by 2030.

“Ford’s $7 billion portion of the $11.4 billion investment is the largest manufacturing investment in the company’s 118-year history.”

Smaller additional investments will be on America’s auto technician industry – Ford intends to spend $525 million (including $90 million in Texas) within the next five years to prepare the workforce.

“Ford is investing $90 million in Texas alone as part of a $525 million total investment across the U.S. during the next five years to transform America’s auto technician industry. The investment will go toward job training and career readiness initiatives for the current and next generation of technicians. These programs aim to develop highly skilled technicians and will support Ford’s growing portfolio of connected electric vehicles.”

“This is a transformative moment where Ford will lead America’s transition to electric vehicles and usher in a new era of clean, carbon-neutral manufacturing. With this investment and a spirit of innovation, we can achieve goals once thought mutually exclusive – protect our planet, build great electric vehicles Americans will love and contribute to our nation’s prosperity.”

“This is our moment – our biggest investment ever – to help build a better future for America. We are moving now to deliver breakthrough electric vehicles for the many rather than the few. It’s about creating good jobs that support American families, an ultra-efficient, carbon-neutral manufacturing system, and a growing business that delivers value for communities, dealers and shareholders.”

“We are proud to be partnering with Ford as they open a new chapter in automobile history. We are excited to be taking this decisive leap together, as partners, and to bring about our common vision for a cleaner planet. Our joint venture, BlueOvalSK, will embody this spirit of collaboration. We look forward to growing our trust-based partnership by delivering on our market-leading value proposition, experience and cutting-edge expertise.” 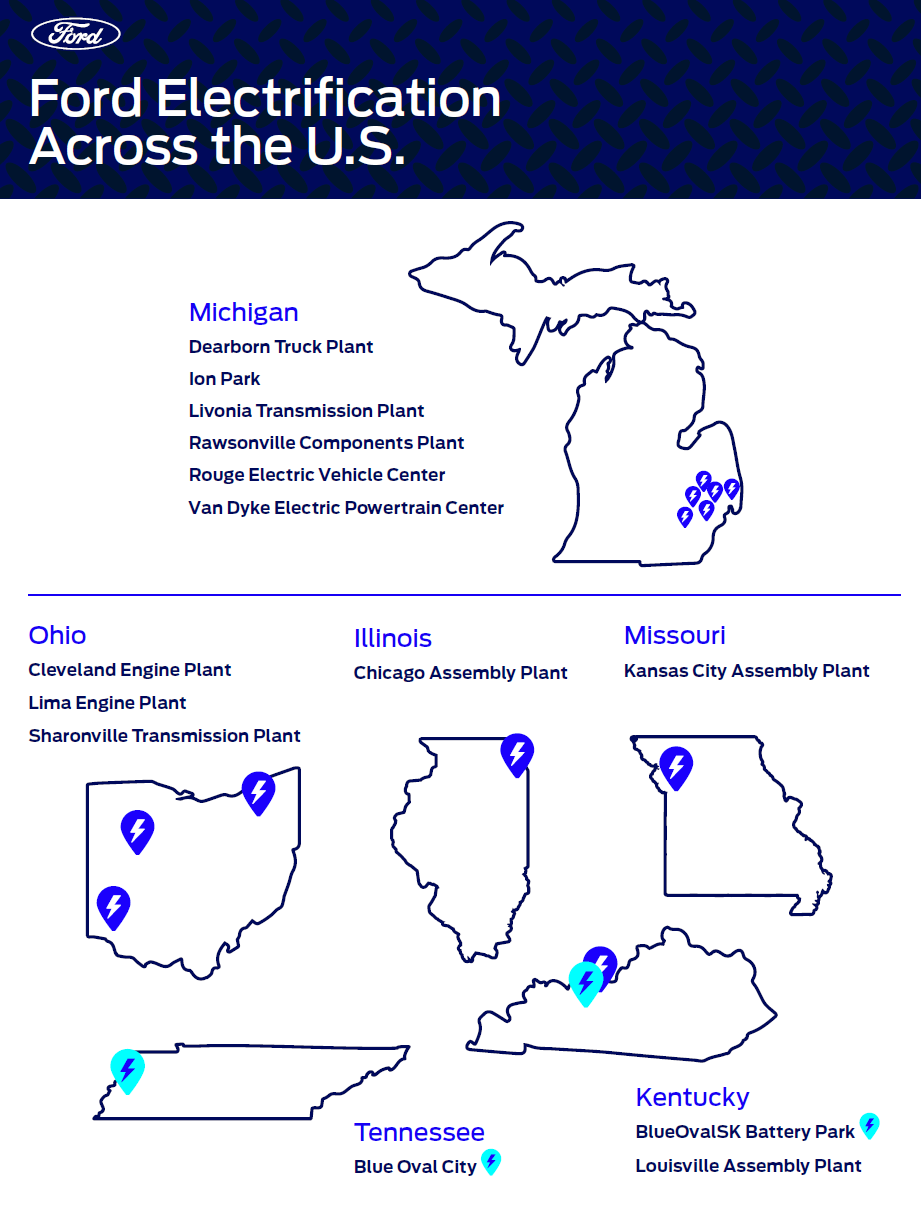