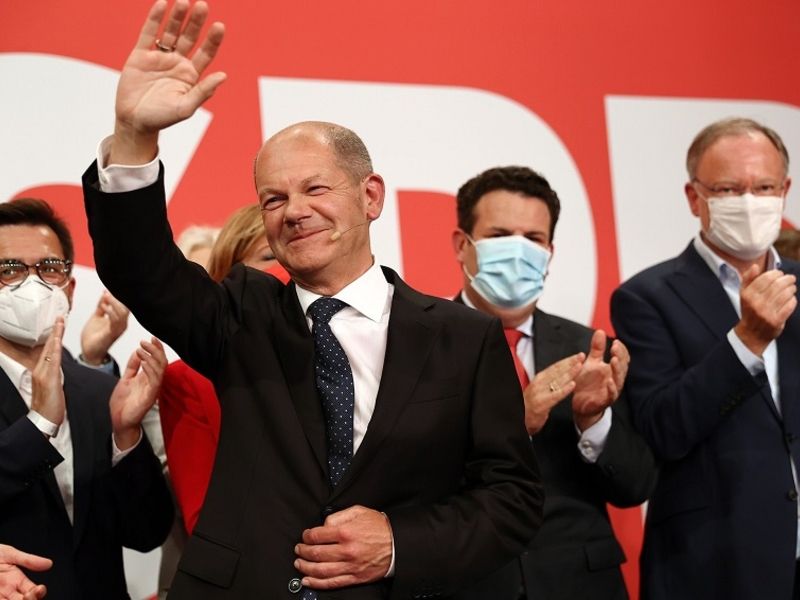 BERLIN — German automakers face possibly months of uncertainty before they know the direction the country’s new government will take on the auto industry.

Olaf Scholz of the center-left Social Democrats (SPD) defeated Chancellor Angela Merkel’s conservatives in an extremely tight German general election on Sunday. The result will likely result in months of negotiations before a coalition government is formed.

Based on the results of the election, coalition options include a government led by Scholz with the Green Party and the Free Democrats (FDP), or an alliance led by Armin Laschet of Merkel’s Christian Democratic Union (CDU) party, also with the Greens and FDP.

The SPD under Scholz beat Laschet’s Christian Democratic-led bloc by 25.7 percent to 24.1 percent. Either party will need a three-way coalition in order to govern, meaning the Greens and the FDP will hold considerable leverage as they begin negotiations.

One of the main points concerning the auto industry is the fate of the internal combustion engine. How to transition the auto industry and its energy system off fossil fuels without destabilizing the economy is one of the most critical issues facing the German economy in general.

The Green party is calling for a ban on combustion-engine cars from 2030, while the FDP rejects this strategy and is instead backing openness to technology and synthetic fuels, including in gasoline and diesel cars.

The SPD has not committed itself to a ban on combustion engines in its election platform, and the CDU’s stance on migrating away from fossil fuel-powered cars is similarly vague.

The CDU wants to promote electric mobility, but on an equal footing with synthetic fuels and hydrogen drives, a stance similar to the FDP.

The CDU wants a “roadmap” for the switch to zero-emissions mobility, with concrete target dates to be worked out.

The SPD does not support a government-determined end date for combustion engines, and Scholz said in a recent interview that consumers would opt for EVs once they achieved price and quality parity.

In a televised debate on Sunday, Bavaria’s leader Markus Soeder, from the CSU, the CDU’s sister party, said he does not believe a ban on combustion engines by 2030 is feasible, but said he thought 2035 is possible, and pointed to the availability of synthetic fuels.

“However, we also have to make significant progress with the technology for this,” he said, as reported by Automotive News Europe sister publication Automobilwoche.

“We would also need major hydrogen initiatives and, above all, the promotion of synthetic fuels. What is crucial is that we not only talk about bans, but also promote the technology. We are not just looking at a legal ban on something, but at incentives and changes,” Soeder said.

Other issues affecting the auto industry include future fuel prices, the building out of electric charging stations across the country, investment in mobility solutions, and introducing a speed limit of 130 kph (80 mph) on German highways, a proposal the FDP and the CDU/CSU reject but is favored by the Green party and the SPD.

“The current hiatus between the outgoing and new government causes a bit of anxiety in the German automotive industry as the new political direction is not yet known,” Gartner automotive analyst Pedro Pacheco told Automotive News Europe.

“However, despite the waiting, I can tell the transition will be, to a great extent, evolutionary rather than disruptive,” he said.

Germany’s two most-voted parties are traditional political forces that probably will not want a major break with recent policies despite pressure by European Union legislation to conduct the transition to electrification at a fast pace. The EU plans to allow only new cars with zero emissions to be sold in the bloc after 2035.

“Depending on the coalition that we will see emerging, we might see a new German government willing to see the local automotive industry play a more active role in sustainability,” Pacheco said. “However, the true test will be the ability of those ambitions to stand against the threat of job losses, something that is already looming due to the progressive phase-out of the internal combustion engine – an invention also dear to Germany itself,” he said.

On Monday the SDP leader Scholz urged the Greens and the Free Democrats to join him in government as soon as possible as he looked to seize the momentum after his party’s narrow victory. He said he aims to take office before Christmas. “It’s clear what the electorate wants — an SPD government with the Greens and the FDP,” he told reporters at the SPD headquarters in Berlin. “That is what we want now.”

Scholz faces a tussle to form a government with his main rival, the CDU’s Armin Laschet, who said on Sunday night that he will also seek a deal with the Greens and the FDP to keep Scholz out.

After 16 years under Merkel’s pragmatic centrist leadership, the outcome of the coalition talks will have wide-ranging implications for Europe and the West.

Merkel, who plans to retire, will remain in office until a new government is in place, and if she stays through mid-December she will overtake Helmut Kohl as Germany’s long-serving postwar leader.

Bloomberg and Reuters contributed to this report