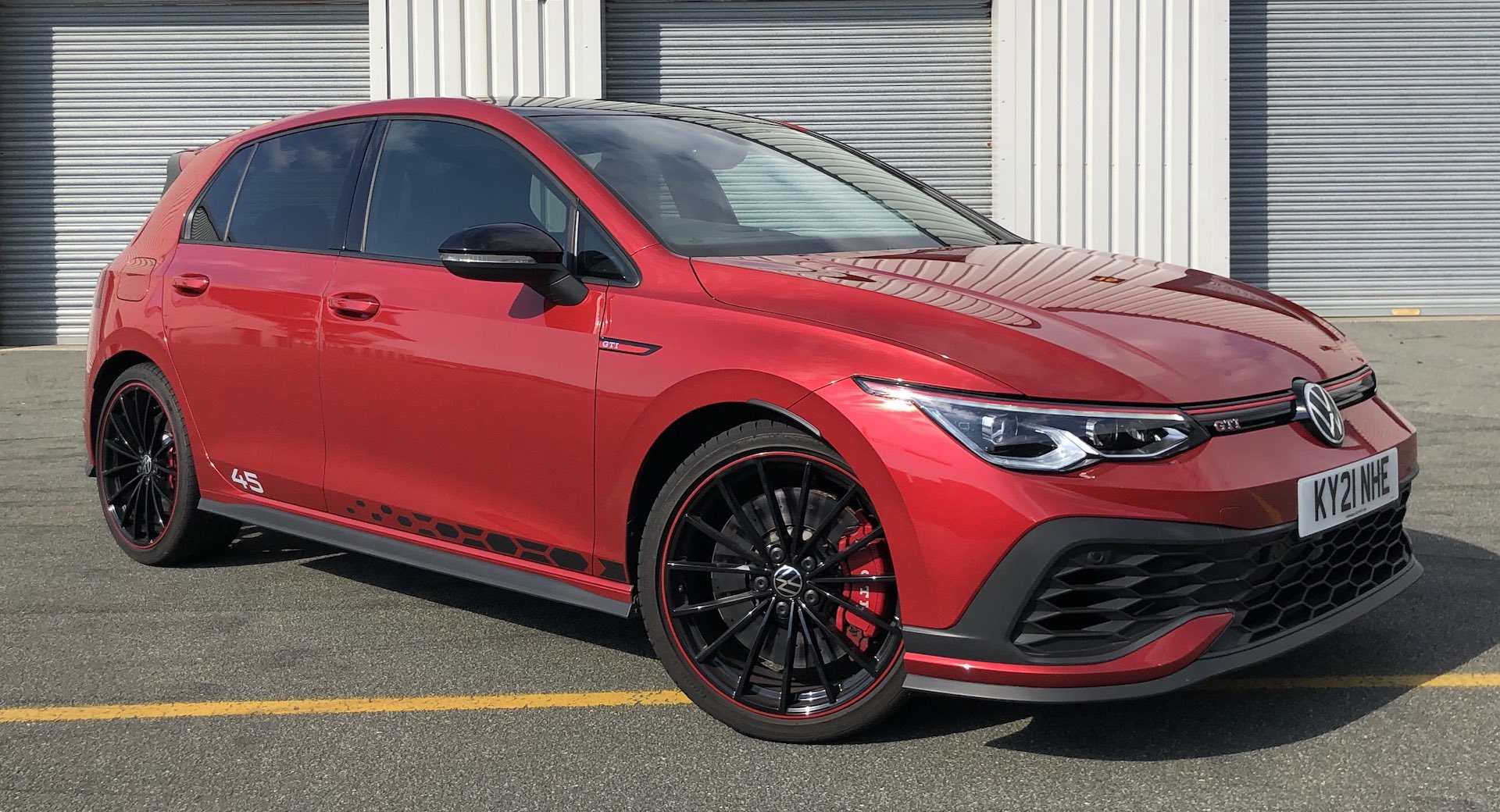 It’s incredible to think that the VW Golf GTi, the one-time young upstart that helped define a completely new class of car and consign crusty clunkers like the MGB to the history books, is almost half a century old.

This year marks the GTI’s 45th anniversary and as VW buffs know, that’s all the excuse VW needs to roll out one of its commemorative GTIs, complete with more equipment and bespoke markings.

Previous anniversary models are now highly desirable (this 8-mile 25th anniversary car recently sold for £38,250/$53,100), but will future collectors be falling over themselves to buy the 45, and should you be doing the same now?

It Starts With the Clubsport

The Golf GTI has come in for a kicking from some quarters over the years for not being as fast or focused as some rival hot hatches. That’s a problem VW has solved in recent times with a two-tier line-up consisting of the regular GTI and the also-front-wheel drive GTI Clubsport; three-tier if you include the all-wheel drive Golf R. 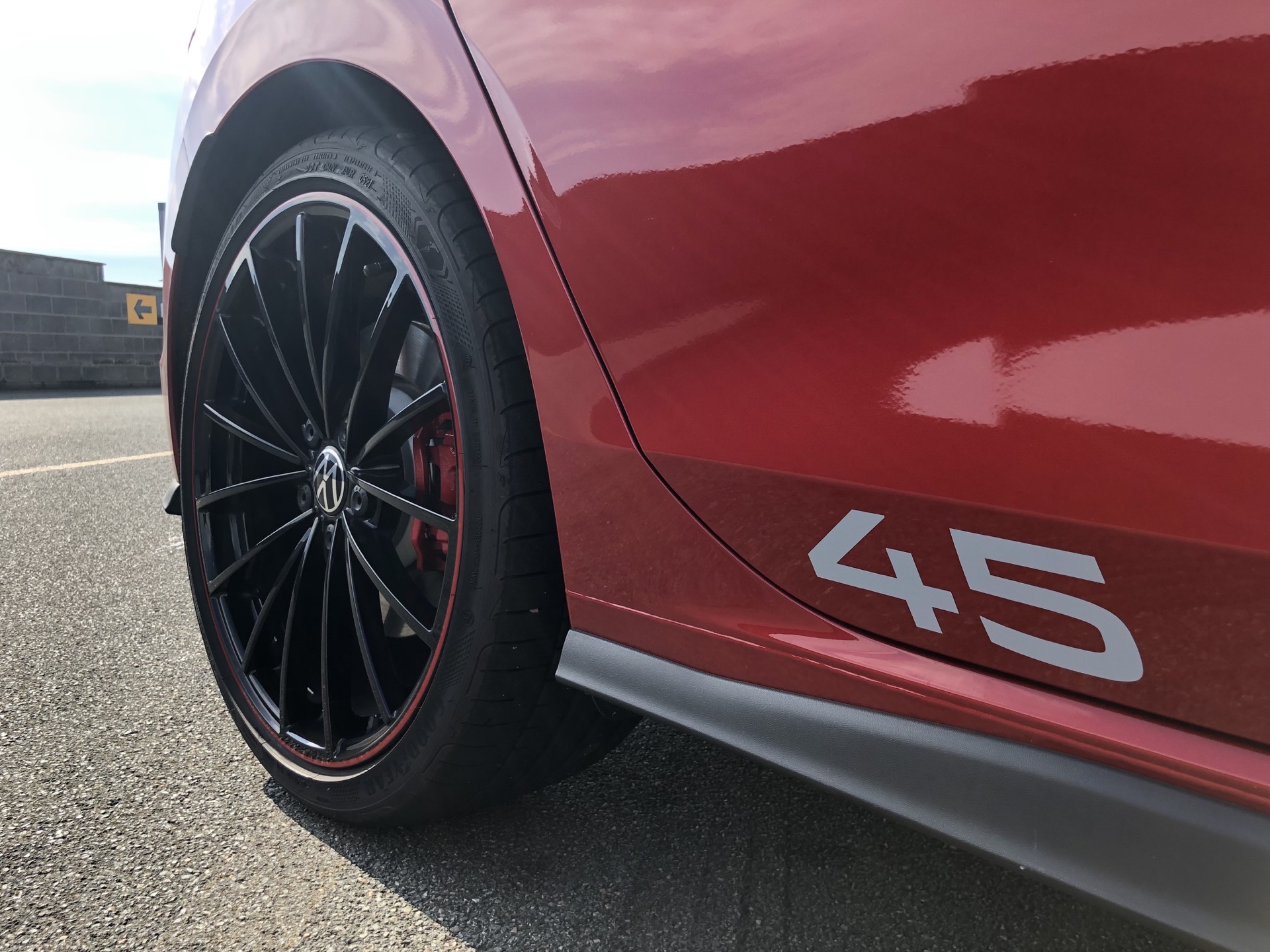 And it’s the Clubsport that forms the basis for the 45. That being the case, much of what’s different, what’s good and what’s bad about the anniversary car also applies to the Clubsport. So this review is as much about the merits of that car over the stock GTI. But before we dig into that, let’s take a look at what’s specifically different about the 45.

Most obviously, there are hexagon-motif and ‘45’ stickers along the doors, and the 19-inch ‘Scottsdale’ wheels are the same size as the Clubsport’s optional rims (18s are standard there) but of a totally different design. The roof and door mirrors caps are black, there’s a ‘45’ badge on the base of the steering wheel, and an angry-looking Akrapovic exhaust poking out from under the rear bumper.

Power? A GTI, And Then Some 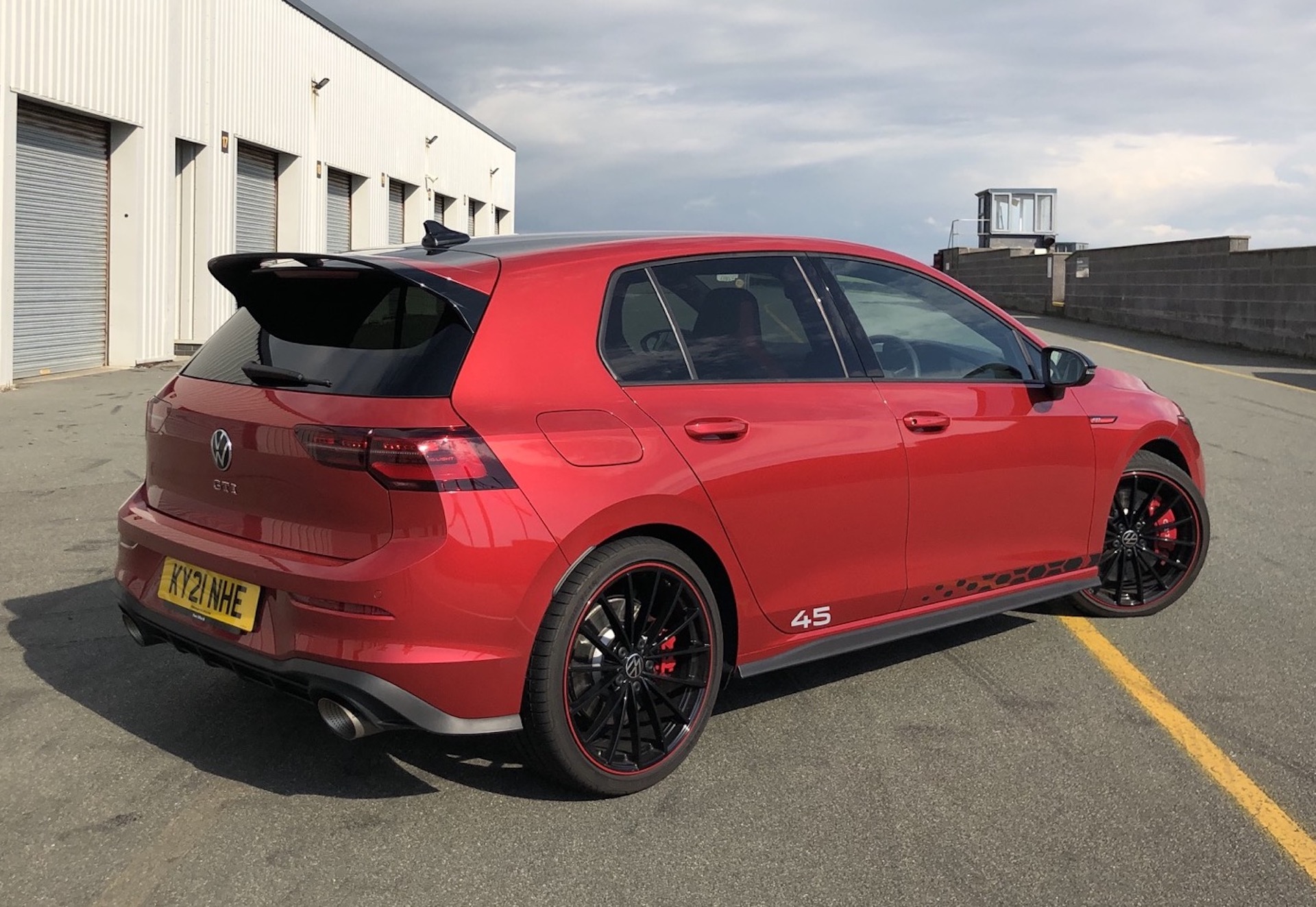 But, unlike the regular GTI, which gets a choice of two- and three-pedal transmissions, the Clubbie (and its 45 offshoot) comes only with VW’s seven-speed twin-clutch DSG. It also gets a slightly shorter final drive for snappier acceleration, a proper limited slip differential instead of the stock GTI’s brake-based fake LSD, a 10 mm lower ride height with more pronounced front camber, and revised rear springs and dampers.

DCC adaptive dampers are optional on all three GTIs, and were fitted to the 45 we drove. And as we’ll see, even so-equipped, the 45 is no cushy cruiser. 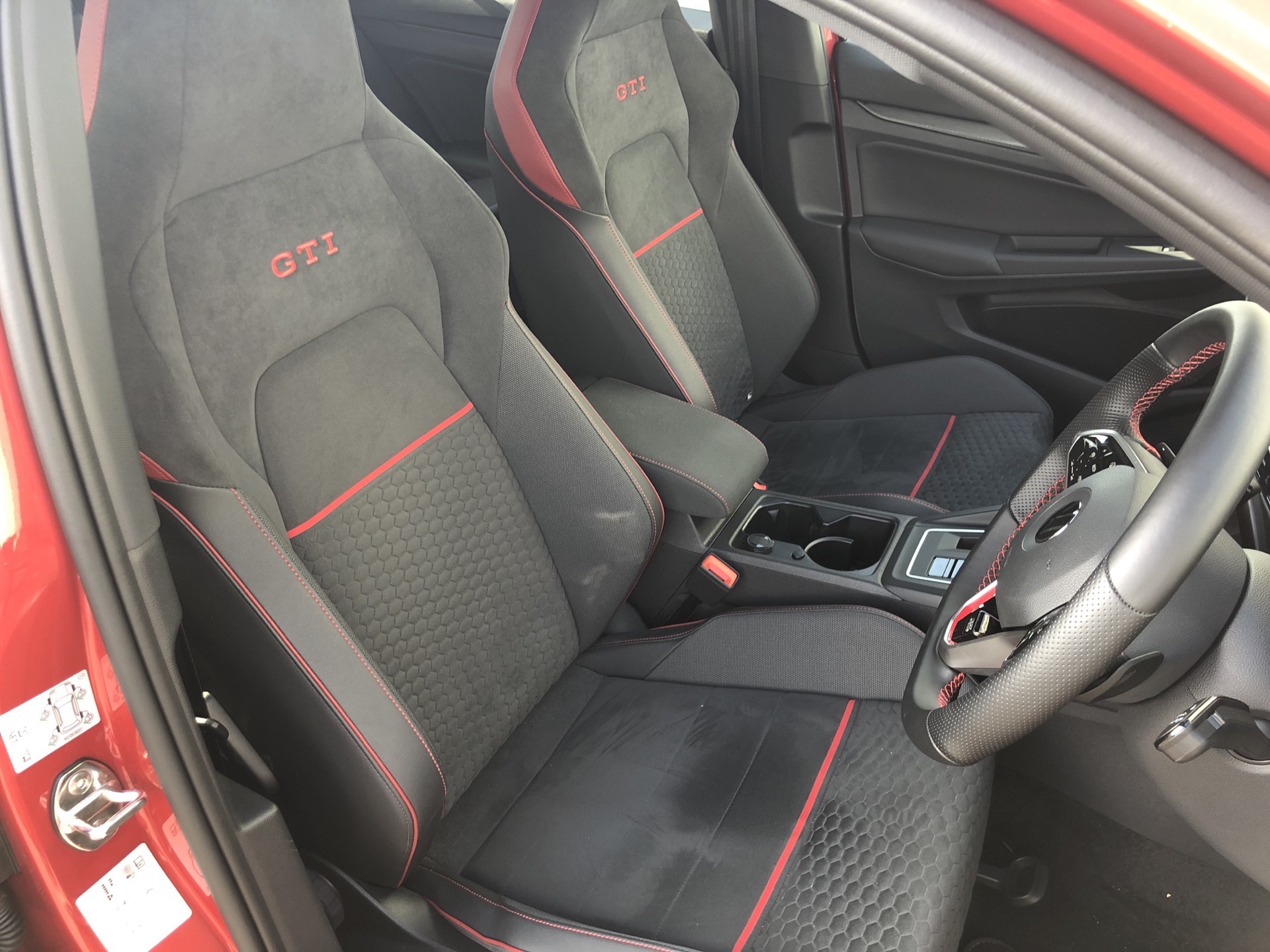 Open the door and the first thing you notice is the absence of the GTi’s trademark tartan seat upholstery. But the seats are the same and strike a great balance between support and comfort. They can also be moved through a seemingly infinite combination of adjustments meaning that, regardless of whether you like to sit right down on the floorpan, or with your head nuzzling the roof liner, you’ll not struggle to get comfortable.

One thing we couldn’t get comfortable with is the infotainment system and steering wheel buttons. The Golf was always conservative and logical, inside and out, but VW really shook things up for the Mk8’s interior. 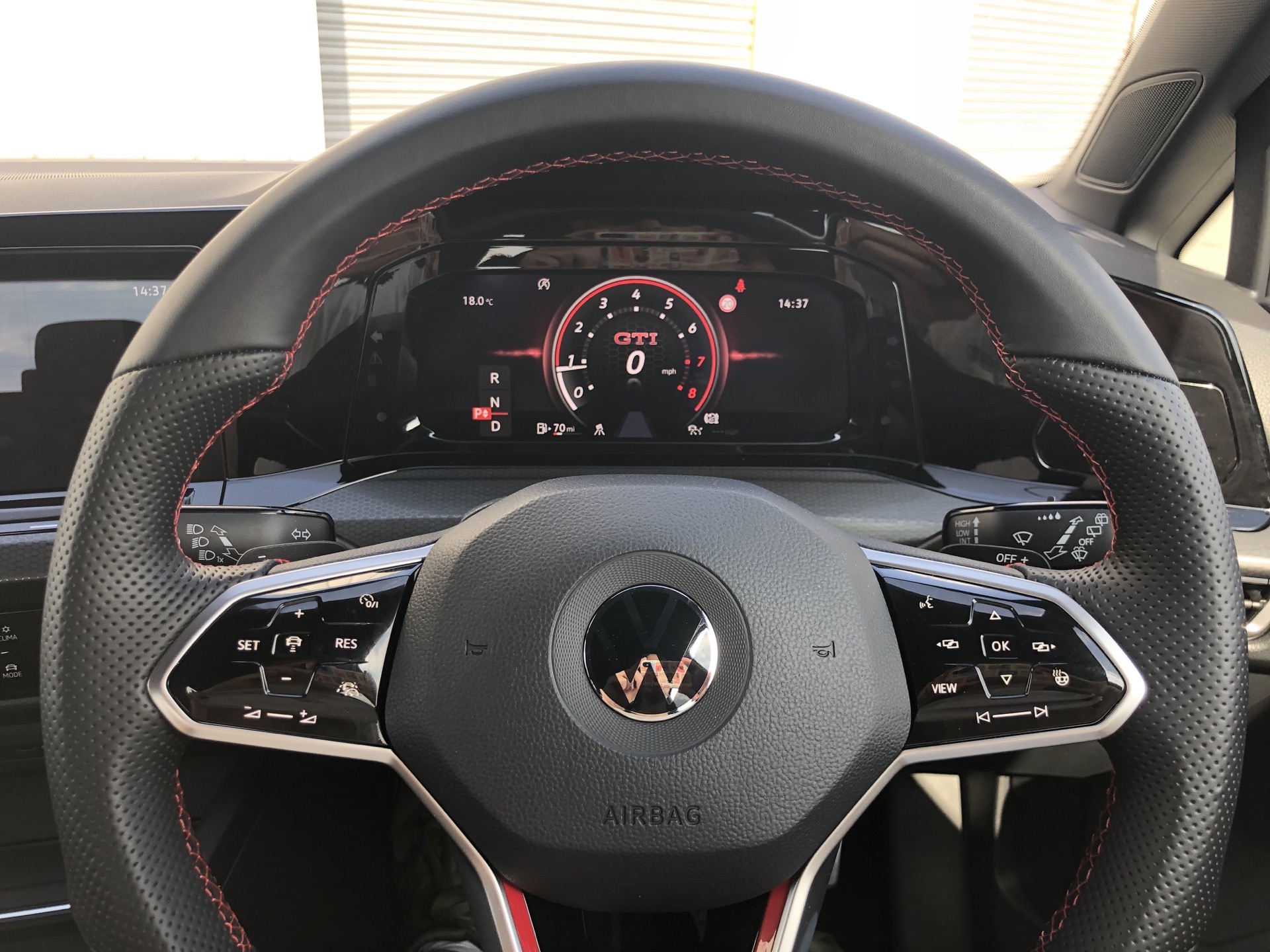 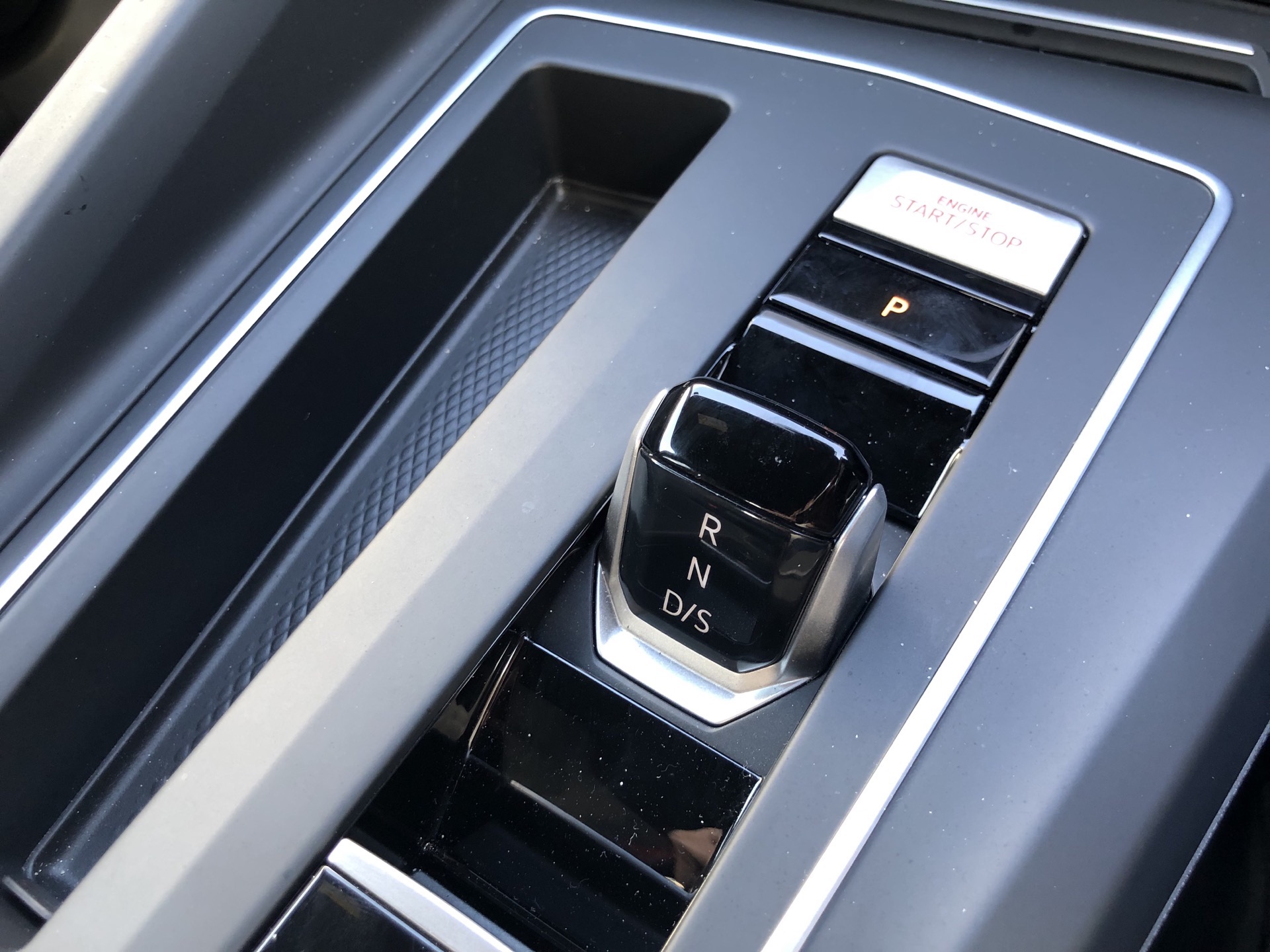 You get a handsome digital gauge pack and a central touchscreen on the dashboard. The gauge pack, I like, and the 911 PDK-style stubby DSG shifter, I don’t mind, though it would have been nice of VW had paired it with the latest Golf R’s jumbo steering wheel paddles.

But you barely have to brush the buttons on the wheel to activate some function you didn’t want, like the heated steering wheel. And the dumb slider controls for the temperature control below the main screen are infuriating, requiring far too much concentration to operate. Gimme an old fashioned rotary dial any day.

This focus on style over substance is a real surprise coming from VW. Maybe it’s just about distracting us from the disappointingly workmanlike lower console plastics. 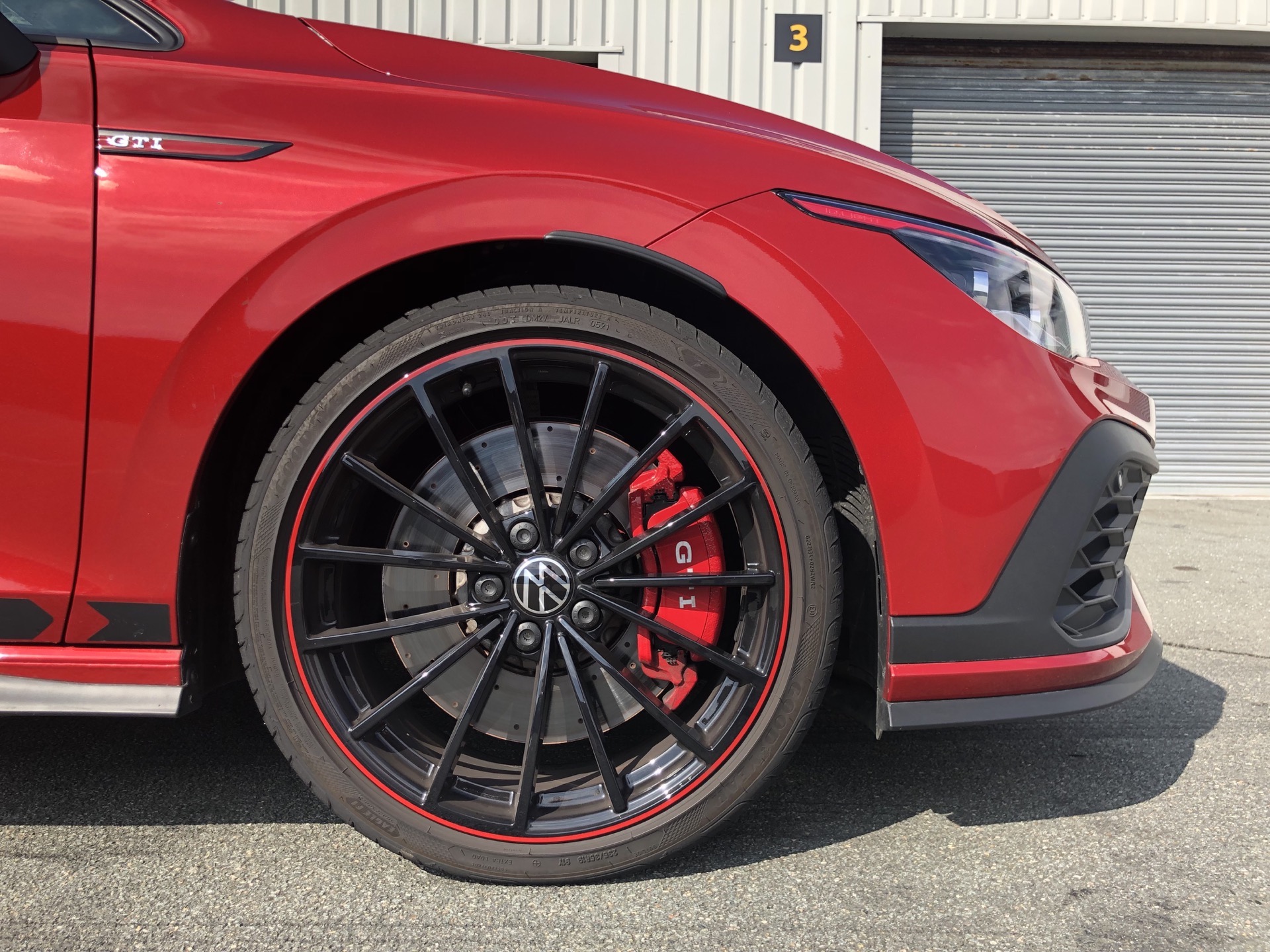 The stock GTi makes a great daily driver, and is a fun steer. But it’s not hot Civic fun. I’m not convinced that the Clubsport is quite there either, but it comes damn close.

It doesn’t take more than a couple of yards to feel the difference in the steering. No, it doesn’t fizz in your hands with Lotus Elise levels of feedback, but it feels far sharper and more communicative than the stock GTi’s, encouraging to push harder than that car does.

There’s more bite at the front despite no change in tire section, and the Clubsport feels much more alert and interested in changing direction. You can feel the extra stiffness at the rear end, too. It gives the Clubsport a tighter feel, but it does come at the expense of some road comfort.

After playing with our car’s optional DCC dampers’ 15 settings we mostly settled at the comfort end of the scale. Because the shocks are adaptive, the system ups the damping force anyway when it senses you’ve got the red mist, without killing compliance. Selecting a stiffer setting feels superficially exciting, but is too harsh unless you’re on freshly laid pavement.

Interestingly though, the Clubsport gets a Nürburgring setting, named after the bumpy, hilly, German racetrack, that actually softens the suspension a touch to keep the tires in touch with the ground. It strikes a good balance, but it’s still a setting you’ll save for attacking your favorite smooth, empty road, rather than the commute to work. 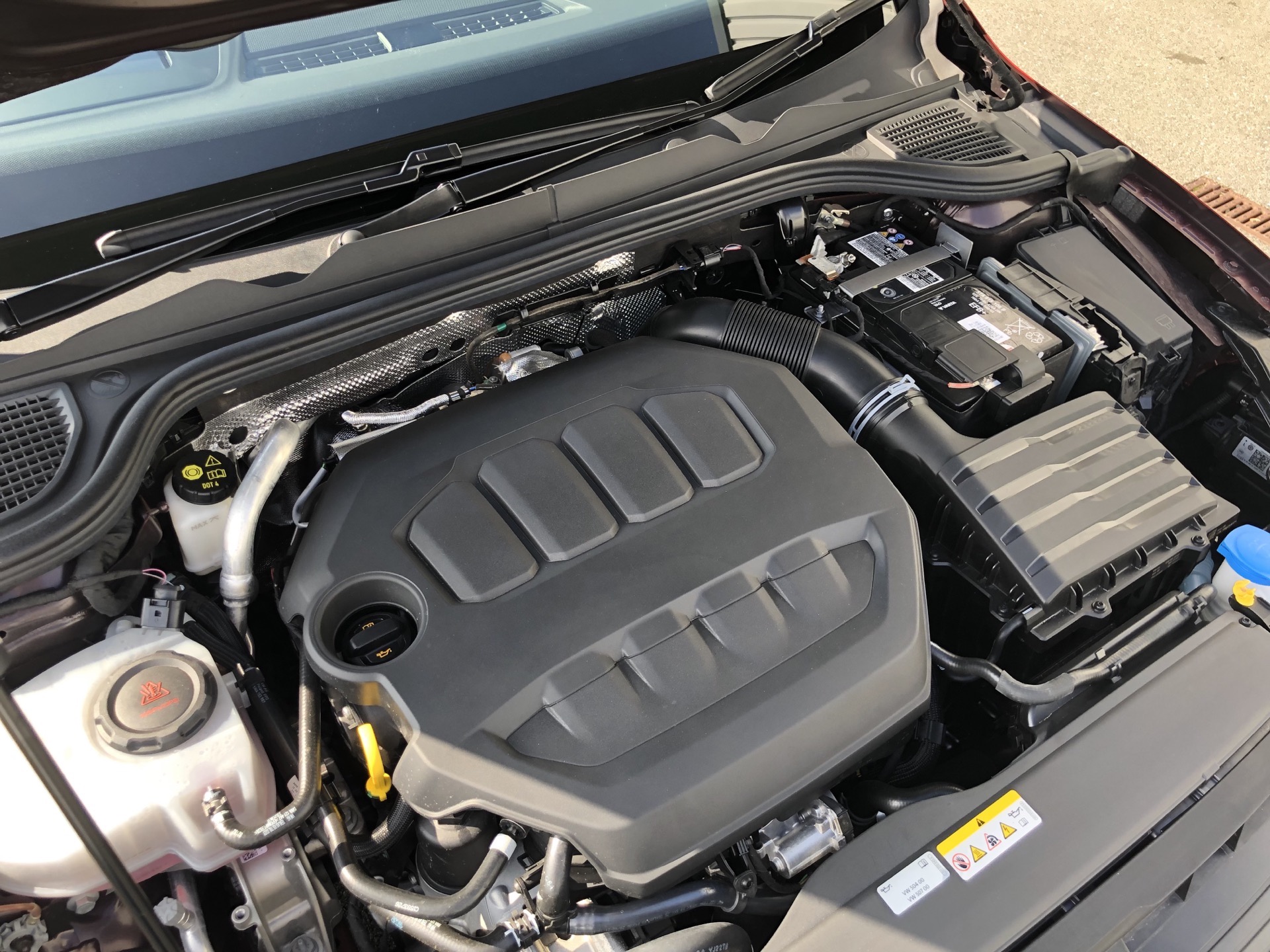 Beyond the chassis improvements, the biggest difference between the GTI and Clubsport is the 2.0-liter engine’s extra 54 hp. Pull out to pass a chain of slower cars and you can really feel the benefit. It makes the Clubsport feel like a genuinely fast car, and just as punchy as the more powerful Golf R.

Which, in the dry, it probably is. Throw some moisture into the equation though, and the all-wheel drive R reminds you why sending 300 hp through four wheels is often a better idea than trying to squeeze it through two, particularly now that the R’s differentials are configured to make it feel less safe and understeery than before. It’s worth mentioning that the Clubsport gets the R’s big brake kit, and extra stopping power is one of the Clubsport’s standout features. 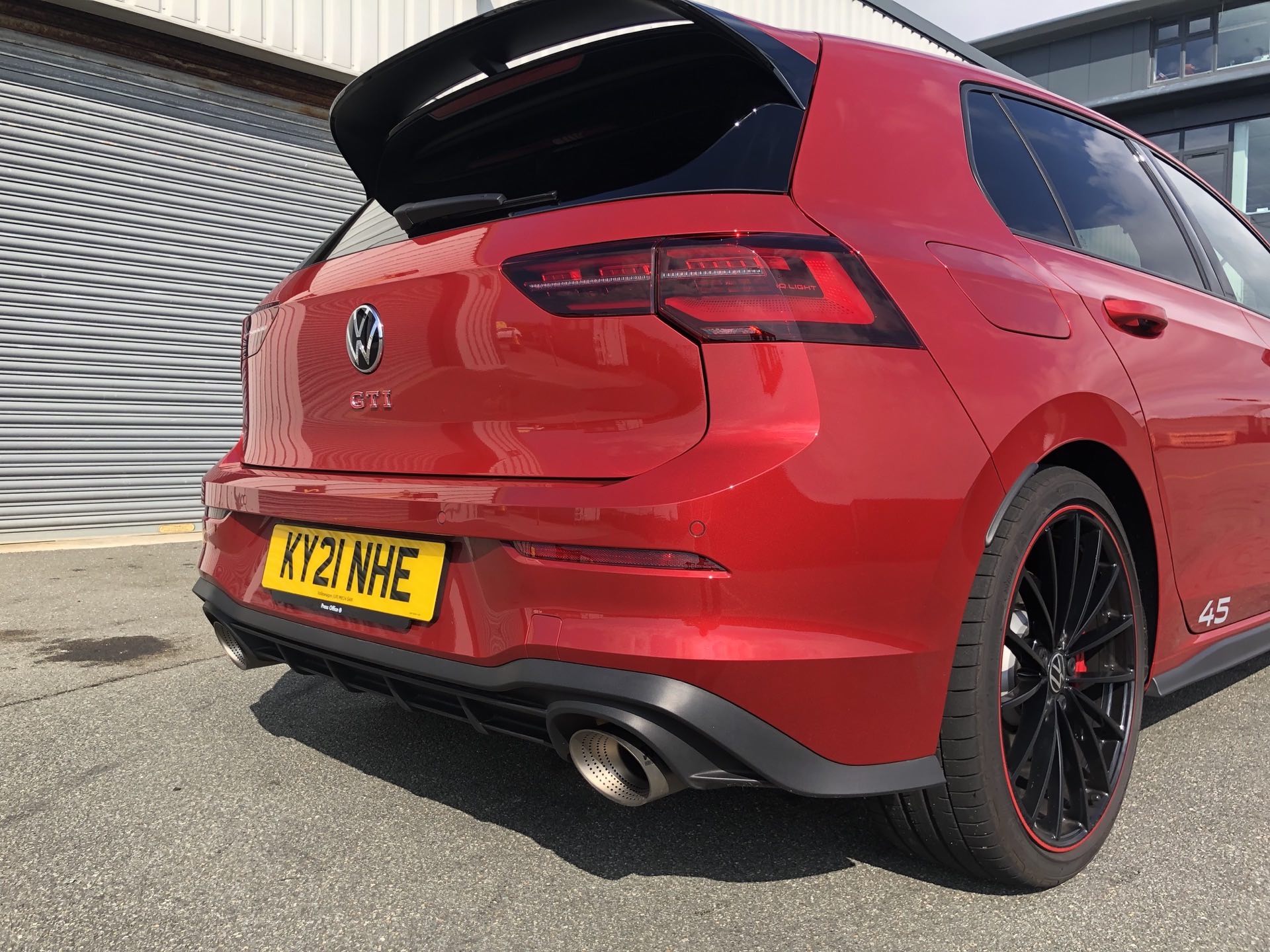 But what about the 45’s party piece, that Akrapovic exhaust? It certainly adds some volume to the Clubsport experience, but its not a very interesting noise, so I can’t say that it made it any more fun. For my money I’d stick with the stock pipes.

And if you can’t justify the 45’s £2790 ($3875 converted) premium with the Akropovic exhaust, there’s not really much here to induce you to fork out for it, unless you’re a real VW nut. 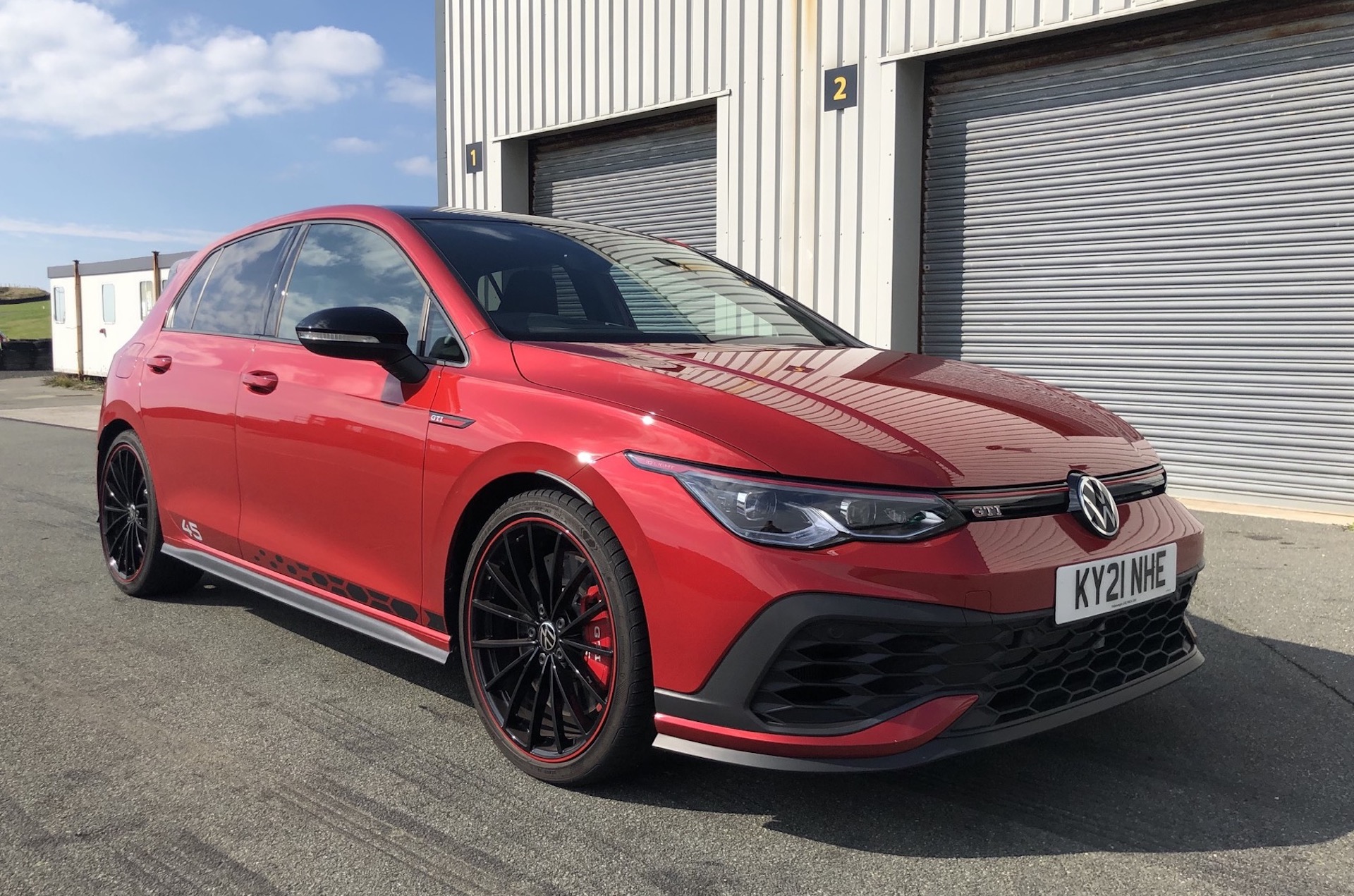 No, we’d stick with the standard Clubsport, which genuinely does feel like it’s offering a very different experience to the standard GTi, if you can live without a manual transmission option. More power, a much more focused chassis, better brakes and subtly enhance styling make it a worthwhile upgrade from the base car, without adding so much to the bill that you’d be made not to dig a little deeper for the Golf R.

Gaming on the go finds home behind the wheel
Why GM’s new Chevy Corvette is a hybrid and not an all-electric car
This Guy Has A Game Boy Boost Gauge For His Subaru STI And You Can Too
Hyundai-Genesis, Toyota, Stellantis and Ford dealerships sell in Q3, Q4 deals
McLaren aiming to be title contenders by 2025