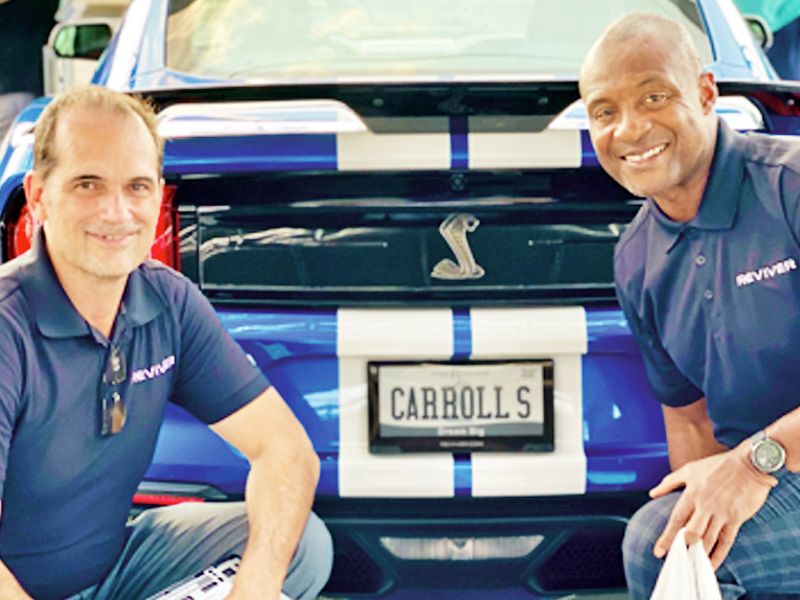 For many car owners, renewing their registration is one of the more annoying (and easily forgotten) tasks on their car to-do lists. ReviverMX, of Sacramento, Calif., aims to change that with digital license plates, and it’s using growing relationships with dealers to do so.

Reviver’s digital license plates, known as Rplates, function via a cloud-based platform that connects vehicle owners with their cars and with state motor vehicle administrations over a wireless network.

“The most significant advantage to owning an Rplate is the ability to renew vehicle registration digitally,” Reviver founder Neville Boston told Shift in an email conversation. “Registration renewal takes place through a highly intuitive smartphone app. The entire transaction is completed in two quick clicks and the plate renews itself.”

Reviver was founded in 2009, and its first eight years were dedicated to designing the product and pushing for relevant legislation in California.

Though currently the plates can be sold only in California and Arizona, the company plans to reach adoption nationwide by 2025. However, this will depend upon each state’s willingness to push through necessary legislation. As Boston noted, “Each state has its own unique set of laws regulating license plates. Adopting digital license plates is a legislative act unique to each state.”

In addition, a number of other countries are working with Reviver to consolidate their own licensing compliance protocols using the platform, according to Boston.

Over the past year, Reviver has been distributing the Rplate through more than 50 California dealerships. Boston explained the process: “Reviver sells its Rplates directly to dealers, who install and display them on showroom floor vehicles bearing dealer-branded graphics on their displays and resell them with the vehicles to consumers.”

According to Boston, there are multiple reasons a dealer would be interested in selling the Rplate, including as an “on-ramp” to a larger sales discussion for a vehicle and as a “point of differentiation” during the buyer’s purchase process.

In addition, Boston says there are a few different ways dealers make money from the Rplate: “Dealers sell Rplates on their own terms and prices, keeping margins for themselves. They also receive a portion of the monthly connection fee in the form of recurring revenue.”

For some dealers, digital license plates make a lot of sense.

“Digital license plates come with a lot of potential in areas of convenience and simplicity, especially since everyone dreads renewing, registration is always a headache, and toll tags only complicate things further,” said Alex Killingsworth, a consultant for Superior Honda in New Orleans. “Digital plates present an opportunity to solve all of those problems with one product, and consumers are going to be willing to pay for that.”

To date, Reviver has shipped more than 13,000 Rplates. The plates aren’t cheap — with prices starting at $899 on the Reviver website. Boston says the typical customer “varies from a broad variety of custom-automobile enthusiasts to the full spectrum of new-car buyers purchasing virtually every make and model of car, truck and SUV.” He also noted that “emerging EV buyers are particularly attracted to the Rplate.”

Beyond the convenience of automatic registration, the Rplate allows car owners to add custom messages from a list approved by the motor vehicle department. The display, which uses “digital paper” technology from E-Ink, can be refreshed using an app. This can come in handy if the vehicle is stolen; owners can add the word “stolen” to the license plate to make it easier to identify.

As the auto world becomes progressively digital and buyers continue to seek out convenience, digital license plates may grow increasingly attractive to buyers and dealers alike.