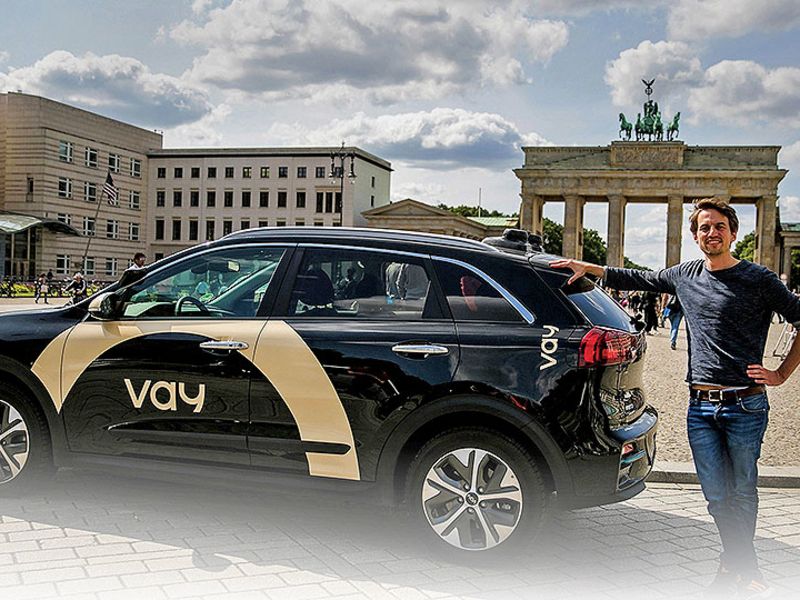 Deploying vast fleets of robocars has been much tougher than Tesla Inc., Alphabet Inc.’s Waymo and others thought. One European startup is now pitching an intermediate step to full autonomy: teledriving.

Germany’s Vay, which has been quietly testing a fleet of remote-controlled electric vehicles all over Berlin, plans to roll out a mobility service in Europe and potentially the U.S. next year.

For a fraction of the price of an Uber, customers will be able to order a remote-controlled car, drive themselves to their desired destination and then get out, leaving it to a human teledriver miles away to either park the vehicle or steer it to a next client. Vay eventually plans to introduce a ride-hailing service that’s entirely remote-controlled.

“We’re launching next year — not in five years — with services that have huge benefits over what is out there,” CEO Thomas von der Ohe, who previously worked on Amazon.com Inc.’s Alexa and at self-driving startup Zoox, said in an interview.

The concept may be novel, though it isn’t new. Former Nissan Motor Co. boss Carlos Ghosn touted the approach at CES in 2017, showcasing a platform for managing fleets of autonomous vehicles developed from NASA technology.

While von der Ohe says he still believes in full autonomy, he learned at Zoox how difficult and expensive it can be to develop robot cars.

While Zoox raised a significant sum of venture capital and at one point was valued at $3.2 billion, the startup struggled to commercialize its technology and ran low on cash during the pandemic. It agreed to a $1.3 billion sale to Amazon in August 2020.

Vay’s von der Ohe and his co-founders — engineer and EV developer Fabrizio Scelsi and Bogdan Djukic, who built software for Skype — have poached people from Google, Audi and Elon Musk’s Boring Co. to develop hardware and software for a teledriving-first approach.

The company’s trained teledrivers operate from stations equipped with a steering wheel, pedals and several large monitors for 360-degree vision without blind spots. The system has built-in redundancies, prevents speeding and overlays safety information onto the screens to make rides safer.

Vay says it has solved latency issues and successfully remote-controlled vehicles through extreme situations requiring emergency braking and evasive maneuvers. Its CEO argues that starting with teledriving will enable the company to build its brand and gather valuable operational data so it can gradually introduce autonomous features as they become available.

But the startup that employs about 70 people will have to overcome challenges such as winning over local regulators, raising enough money to fund its expansion and managing peaks in supply and demand without frustrating customers.

Vay has so far collected some $30 million from investors including Twitter Inc. Chairman Patrick Pichette and venture capital firm Atomico and is open to selling shares to the public in the longer term, von der Ohe said. Vay’s team is talking with major automakers about potential partnerships as the business scales and is exploring future use cases — think steering a truck from a distance as the in-vehicle driver rests.

While outfitting cars with self-driving technology can add as much as $100,000 of cost, Vay says its proprietary software and hardware costs just a few thousand euros and could be installed on any vehicle on the market.

“Vay appealed to us because of the economics,” said Atomico partner Niall Wass, a former Uber executive. “You can get a product on the road way quicker and way cheaper than pursuing Level 4 or Level 5 autonomy.”

Toyota CEO and President Akio Toyoda to step down
Legends of the Autobahn! – 2017 Pebble Beach Week
Ford to cut jobs as it restructures in Europe
Circuit Florida Promises Luxury Condos With Your Very Own Private Club Racetrack
Last State Not To Require Seatbelts Attempts To Draw Line At Pets On Laps, Faces Pushback