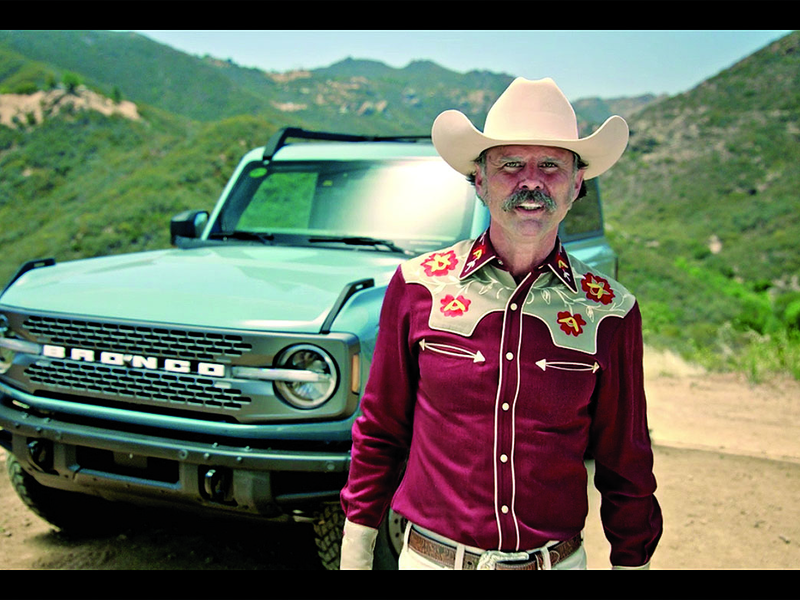 The Bronco is back, and so is John Bronco, a fictitious Ford Motor Co. pitchman who was the subject of a mockumentary last year.

In John Bronco Rides Again, streaming on Hulu, the title character, played by Walton Goggins, learns that Ford created a new Bronco more than 20 years after he mysteriously vanished.

“I thought when I skipped town, man, maybe they’d just cancel the whole thing,” Bronco says in the sequel.

“No, the launch was quite successful,” responds Ford archivist Daniel Stacks, played by Tim Baltz — a potentially inadvertent punch line given the quality problems that have forced many customers to wait months longer than anticipated to receive their vehicles.

The film gives plenty of screen time to the new Bronco as well as a number of vintage ones. It also includes a breakfast cereal called BroncO’s made of oats, cheddar cheese and gummy horseshoes.

“I’ve often said there’s nothing better for the inside of a man,” Bronco says while filming a commercial for the new version of his namesake vehicle, “than the outside of a Bronco.”

Reynolds and Reynolds lead investor in $9M funding round for startup monetizing the driver experience
Dacia Has A Low-Tech Alternative To BMW’s Heated Seat Subscriptions
Legends of the Autobahn! – 2017 Pebble Beach Week
McLaren aiming to be title contenders by 2025
Germany’s make-or-break moment to defend its auto industry is here