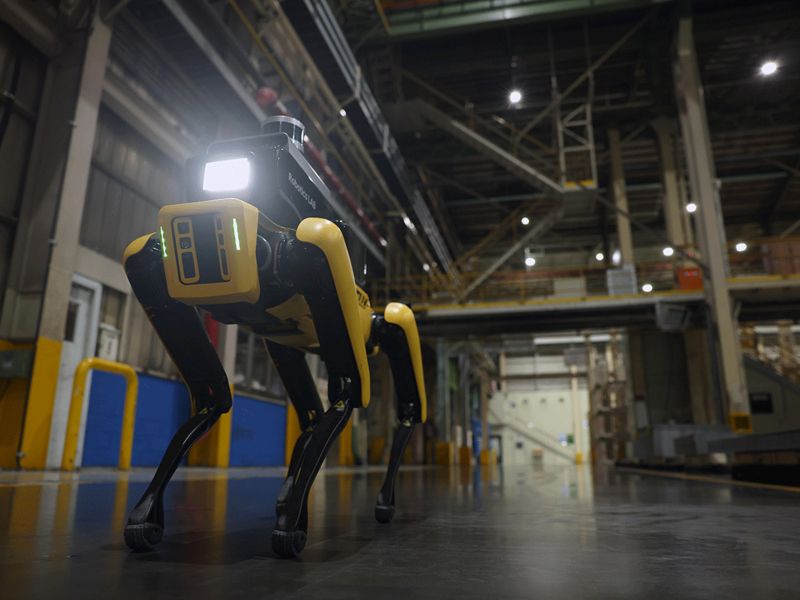 The South Korean automaker on Friday unveiled the new four-legged, walk-about robot rover, called the Factory Safety Service Robot, saying it would conduct midnight patrols of the factory floor at a Kia plant in South Korea. The computerized canine will prowl the premises on the lookout for fire hazards, open doors, potential intruders and other safety issues.

Scanning its surroundings with an integrated thermal camera and 3-D lidar, the robot will use artificial intelligence to assess the situation and alert security when trouble is brewing.

There’s no need for barking; Hyundai’s robot tips off managers silently through a website.

The Hyundai Motor Group says the digital dog is based on Boston Dynamics’ quadruped robot Spot, which was devised to leverage artificial intelligence, autonomous navigation, teleoperation technologies, and computing payload for work in industrial environments.

“The Robot will help detect risks and secure people’s safety in industrial sites.”

The company said its robot will deployed in a pilot program at the Kia AutoLand Gwangmyeong plant to “support late-night security patrols and create a safer environment for workers.”

A video of gadget in operation showed the yellow-and-black robot waking from rest off the floor like a golden retriever rising to chase a tennis ball. It then scampers through the dark, empty halls of the after-hours factory, a bright cyclops-like light shining its way through the night. The robot scans equipment for signs of overheating, checks on open doors and scampers upstairs, livestreaming its patrol to managers who can take remote manual control when needed.

“The quadruped robot is able to navigate through narrow spaces as well as identify blind areas that are hard to see with the human eye,” the automaker said in a press release.

Hyundai Motor Group is prioritizing robotics and artificial intelligence as part of its plan to diversify into new businesses that are key to next-generation mobility. Underscoring its interest in robotics, the Group took a controlling 80 percent stake in Boston Dynamics this year.

Among the new target areas are urban air mobility and so-called purpose-built vehicles.

To pursue such projects, the car conglomerate has also established tech hubs under the umbrella of Hyundai CRADLE, or the Center for Robotic-augmented Design in Living Experiences. It has centers for this kind of development in Silicon Valley, Seoul, Tel Aviv, Berlin and Beijing.

Toyoda set to remain a force at Toyota, even as he bows out
Audi Activesphere combines mixed reality interior with a pickup trick
Self-driving tech firm Aurora hires its first president
Behind the Scenes of 2013 SUV of the Year – Wide Open Throttle Episode 36
Tesla, insurers take different paths to deal with expensive repairs