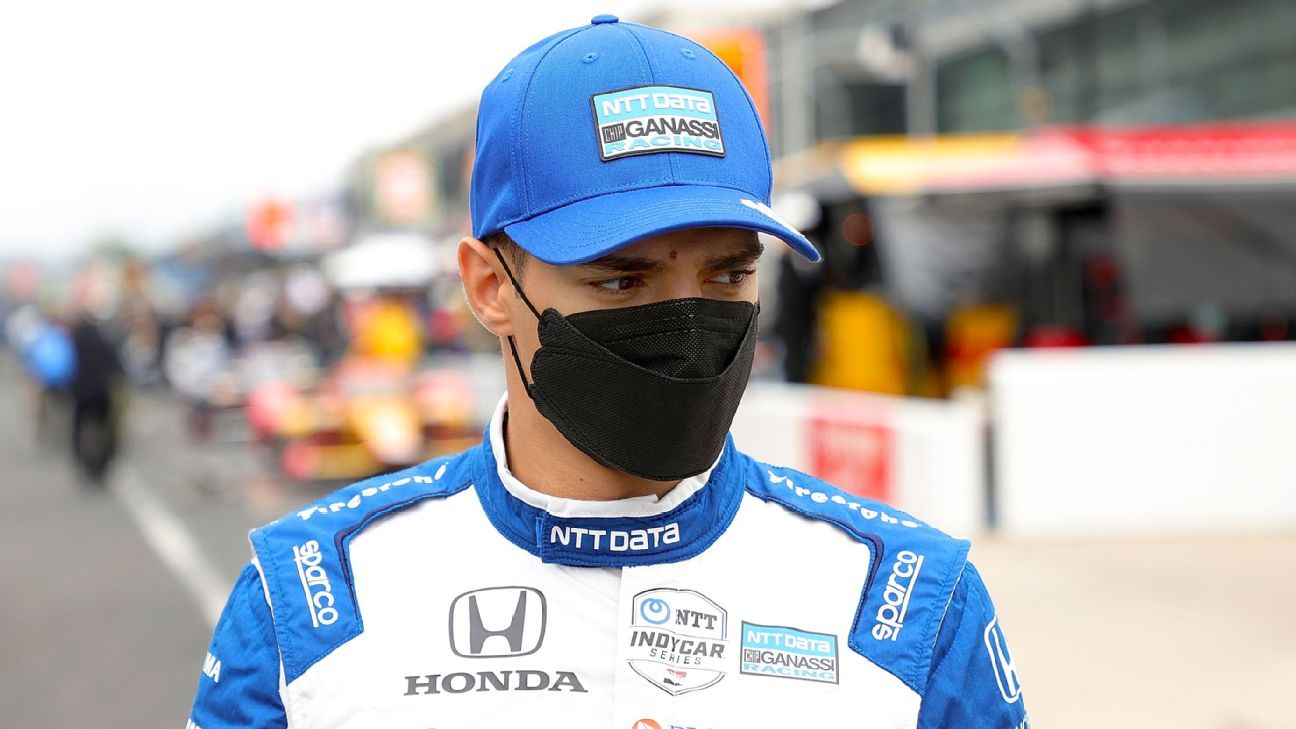 PORTLAND, Ore. — Alex Palou earned the first pole of his IndyCar career and put himself in position to reclaim the championship lead Sunday at Portland International Raceway.

Palou turned a top lap of 58.7701 seconds in Saturday qualifying on the 1.964-mile, 12-turn permanent road course built in 1960. The Spaniard had been to the Portland track only once before — the race was canceled last season during pandemic rescheduling — for a test session last month.

But he said he immediately loved the track and spent IndyCar’s three-week break heading into Portland on the simulator preparing for this pivotal title race.

“We’ve been working hard, trying to make this happen,” Palou told The Associated Press after his qualifying lap. “We’ve been super competitive in qualifying this year, but we never got that last lap time that we needed for a pole and got it here and am just super happy to tick that box off.”

More important, Palou’s top competition for the title will all start behind him Sunday. Palou earned one point for winning the pole and cut his deficit to Pato O’Ward to just nine points ahead of the 110-lap race.

“The big points are [Sunday]. I’m super happy and super proud of what we did, but we need to try and keep the position,” Palou said. “It’s a good start to start up front and hopefully still going to carry some momentum to the end of the season. We’ll get there.”

O’Ward overcame a 48-point deficit over two races as Palou suffered an engine issue on the Indianapolis Motor Speedway road course and was collected in a crash at Gateway outside St. Louis. Palou had been the points leader after eight of 13 races this season.

O’Ward will start seventh after his Arrow McLaren SP teammate Felix Rosenqvist bumped him from advancing into the Fast Six final round of qualifying.

“The guys I’m fighting are in front of me, so I need to pass them,” O’Ward said.

Alexander Rossi, who is not part of the championship picture, qualified second for Andretti Autosport. He was followed by six-time and reigning series champion Scott Dixon, who joins Chip Ganassi Racing teammate Palou in the top three.

Dixon dropped from third to fourth in the IndyCar standings, 43 back from O’Ward, when he was collected in the same crash as Palou at Gateway. He still believes he and Palou are firmly in the title fight, with Dixon’s path clear: “We’ve got to win,” the New Zealander said.

But if he doesn’t win the title, Dixon said he is rooting squarely for his teammates and said the 24-year-old Palou has worked hard for his shot at the championship.

“You won’t meet a nicer person than Alex. I’ve told him he needs to be a little more of a [jerk],” Dixon said. “It’s been really good for the team.”

Marcus Ericsson, another Ganassi driver who is fifth in the standings and 60 points out, qualified 10th.

Two-time IndyCar champion Josef Newgarden had the worst qualifying effort of the title contenders. His win at Gateway moved him to third in the standings, 22 points back of O’Ward, but he didn’t advance out of the first round of Saturday qualifying and will start 18th.

“We just didn’t have any pace,” Newgarden said of his Chevrolet from Team Penske. “It wasn’t a bad lap. It just wasn’t enough. We’ll just have to figure it out.”

The IndyCar season concludes with three consecutive races on the West Coast as the series shifts from Portland to California for the road course at Laguna Seca and the finale on the streets of Long Beach. All three races were canceled last season, and Palou, a second-year driver, has almost no experience on the three remaining circuits.

O’Ward, meanwhile, has raced at Long Beach before in the IndyCar Series and swept a pair of Indy Lights races at Portland in 2018 when he won five of the final seven events to win the feeder series championship.

Ryan Hunter-Reay, in his final three races with Andretti Autosport, was not able to make a qualifying attempt because of an electrical issue in Saturday morning practice. He will start last in the 27-car field Sunday.

Takuma Sato will start 26th because of a penalty for also changing his engine on Saturday morning, and Rinus VeeKay, celebrating his 21st birthday Saturday, will drop to 25th because of his penalty for an engine change after Gateway.

With only three races remaining this season, the free-agency period has picked up dramatically with Hunter-Reay actively looking for another ride as he is expected to be replaced by Romain Grosjean next season. Dale Coyne seemed to confirm that Grosjean would be gone after his first season in IndyCar with the team when Coyne said Saturday that he is still trying to put together a two-car lineup for 2022.

Bobby Rahal said he is evaluating several drivers for a third Rahal Letterman Lanigan entry next season, and Oliver Askew will drive the final three races of the season as he gets his look. RLL has also used Santino Ferrucci and Christian Lundgaard in the car. Rahal said he is not sure what will happen next season with Sato, the two-time Indianapolis 500 winner who needs financial backing from Honda to finalize his deal.

Rahal said Sato is still in the mix for a seat at RLL, but the team won’t field four full-time cars next year. RLL would field a fourth at the Indy 500, Rahal said.

Simon Pagenaud said he is still a few weeks away from revealing his 2022 plans, which seems to indicate he won’t be returning to Team Penske next year. Roger Penske said only that if a current driver leaves the organization — Newgarden, Will Power and Scott McLaughlin are under contract — Team Penske would scale back to three IndyCar entries next season.