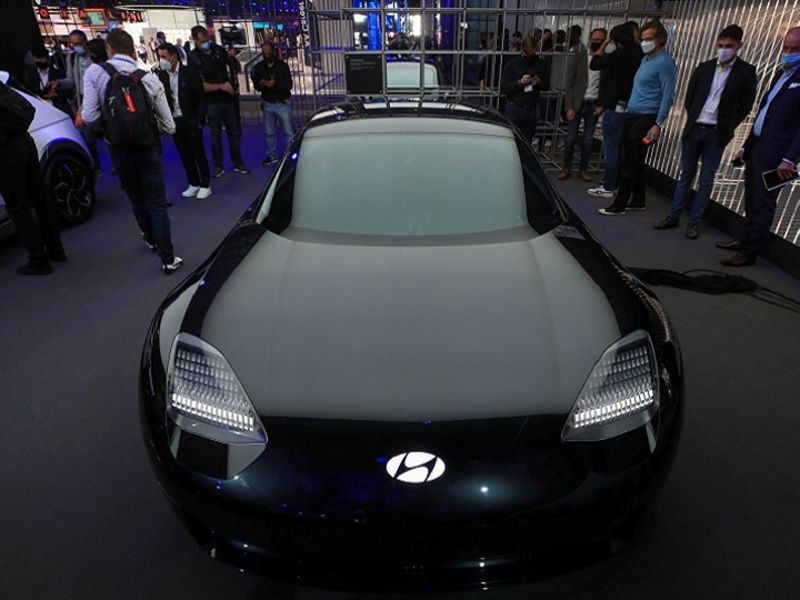 MUNICH — Hyundai is considering whether to expand its full-electric Ioniq sub-brand to smaller cars based on the E-GMP platform, including a successor to the Kona small SUV, the brand’s marketing chief said.

“It would make sense to extend all the benefits associated with the E-GMP platform to smaller vehicles,” Thomas Schemera, global head of marketing at Hyundai, told Automotive News Europe at the Munich auto show. Those benefits include both long range and connectivity features such as over-the-air software updates.

“I would vote for such a project,” Schemera said.

The Ioniq 5 compact crossover is the first model in the Ioniq lineup based on the E-GMP platform. Hyundai received “more than 40,000 orders” for it so far in Europe, according to Andreas-Christoph Hofmann, head of marketing at Hyundai Motor Europe. Hofmann said European customers “would get around half of that figure this year, because of the chip shortage issue.”

The Ioniq 5 will be followed by the Ioniq 6, a midsize sedan to be launched in late 2022 or early 2023, depending on how the semiconductor shortage plays out, said Hofmann.

Asked whether a successor to the Kona Electric could bear the Ioniq 2, 3 or 4 nameplate, Schemera said: “That’s something I don’t want to confirm, but it seems to be likely.”

Schemera said the current Kona Electric, which shares underpinnings with internal combustion engine versions, “is a fantastic car.” It was the fifth most popular EV in Europe through in the first half of 2021 with 21,802 sales, up 95 percent from the first half of 2020, according to figures from JATO Dynamics.

Another Hyundai group vehicle, the Kia e-Niro, was in sixth place, with 20,804 sales in the first half.

Hofmann said the start of Kona Electric production at the brand’s factory in the Czech Republic in the first half of 2020 had helped to meet demand.

Schemera said the main challenge for a small car on the E-GMP platform was not engineering but creating enough volume and economies of scale to meet profit targets with expensive-to-produce EVs. If that can be achieved, he said, it does not make sense to develop new internal-combustion based small vehicles.

He said this discussion was now taking place within Hyundai.

The small car and SUV/crossover segments, with their low margins, still rely heavily on small gasoline-engine cars. Possible competitors to a small electric vehicle from Hyundai include the Peugeot 208 and Opel/Vauxhall Corsa small hatchbacks; the Peugeot 2008 and Opel/Vauxhall Mokka small SUVs; the coming Renault 5 (2024); and future vehicles from the Volkswagen Group, including small cars from VW brand, Skoda and Cupra.

Schemera said VW’s small car concept “is a yardstick for us.” Hyundai needs to be able to react quickly, he said, because “we cannot afford to think about reality but push it to four years down the road.”

“If they offer cars on that scale for 20,000 euros, we have to have a look and maybe come close or beat it,” he added.

Asked if Hyundai would be in a position to offer such a car in 2025 at a similar price, Schemera said: “Maybe it won’t take that long.”