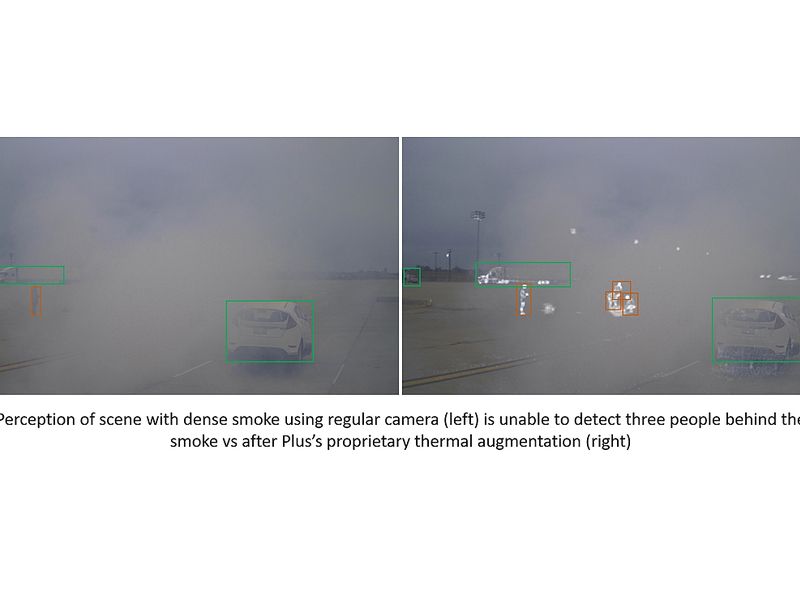 The assortment of sensors automated vehicles should use to perceive their surroundings and detect obstacles is anything but settled upon.

Cameras, radar and lidar comprise the elemental sensors needed to reach higher levels of automated driving. But more companies are now exploring the ways thermal cameras might augment their systems.

A company called Plus that specializes in developing automated driving for trucks, is the latest to evaluate the potential of thermal cameras. The company said Wednesday it is collaborating with Teledyne FLIR on a development project that utilizes the cameras on its sensor stack for Level 4 automated vehicles.

“You can never be too safe when it comes to equipment you put on a heavy truck,” Tim Daly, chief architect for Plus, said in a written statement. “Combining thermal cameras with our other sensors would bring an additional margin of safety to our system.”

Thermal cameras are particularly adept at detecting obstacles in conditions when regular cameras cannot: low-visibility and high-contrast situations, through shadows, direct sunlight, fog and smoke. Plus says thermal cameras can spot pedestrians at distances of 250 meters.

Teledyne FLIR is one of the key suppliers of thermal cameras. Israeli tech company Adasky is another, and the company’s spokesman said it is working with a Detroit automaker on integrating the technology.

Veoneer, the software and hardware supplier that Magna and Qualcomm are bidding for, produces thermal sensing systems for driver-assist features and autonomous systems that help perceive objects three to four times farther than a vehicle’s typical headlight range.

One additional benefit of thermal cameras? While regular vision systems can spot humans, they sometimes can confuse a picture of a person on a billboard with an actual one in traffic. Thermal cameras help make the distinction clear.

Cost has brought some hesitancy in the industry of adding another sensor. But for tractor-trailers and passenger cars alike, it’s a small price to pay in an automated-driving industry already under considerable safety scrutiny.