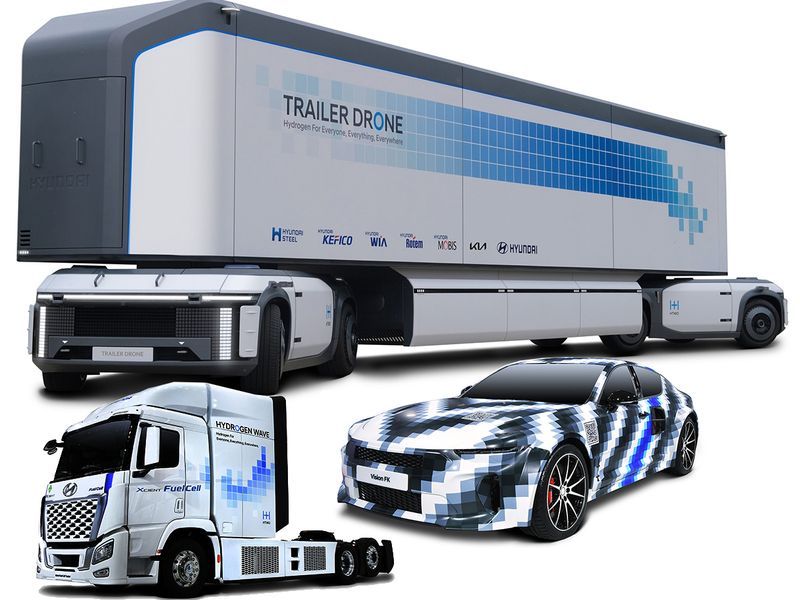 TOKYO — Asia’s two auto superpowers, Hyundai Motor Group of South Korea and Toyota Motor Corp. of Japan, may be competitors, but they also have something in common when it comes to their visions of the future: They both believe that hydrogen power is a promising and commercially viable alternative for a coming generation of vehicles.

It’s not a widely held view around the industry.

But Hyundai and Toyota are true believers that hydrogen is the carbon-neutral energy source of tomorrow, and they are both moving ahead with plans.

Last week, Hyundai Motor Group Chairman Euisun Chung unveiled what he called a “Hydrogen Wave” campaign, a move to claim global leadership in the technology with an ambitious new vision.

Hyundai is planning a next-generation hydrogen fuel cell system that is cheaper and more powerful than current hydrogen technology, plus a range of new vehicles and concepts — including a sports car, trucks and autonomous cargo drones.

And in a warning shot to battery-electrics, Hyundai vowed that by 2030, its hydrogen fuel cell technology will achieve price parity with full-electric vehicles.

“Fighting climate change and shifting to renewable energy will not be complete without hydrogen,” Chung said while outlining a road map that includes hydrogen-fueled trains ships, robots and urban air mobility, on top of more traditional four-wheeled fare.

“We want fuel cells to be used by everyone, everywhere and for everything,” he said.

Knocking down the cost of fuel cells could open the door to more hydrogen technology development. High associated costs have led most automakers to steer away from hydrogen fuel cells to focus on battery-powered electrics. But the dueling development of Hyundai and Toyota in the field could spark new competition and new breakthroughs.

But neither Asian automaker has much proof of life yet. Sales of hydrogen fuel cell vehicles have been minuscule to date. Hyundai Motor Group said in 2018 it aimed to produce 500,000 fuel cell systems for vehicles by 2030. But last week, an executive declined to give a volume target under Hydrogen Wave.

Albert Biermann, Hyundai Motor Group president and R&D head, said a next-generation Hyundai Nexo will arrive in 2023 and that the Staria people-mover van will get a fuel cell setup at that time. Both Kia and the Genesis premium marque, he added, will get fuel cells after 2025.

Hyundai even teased a high-powered hydrogen-fueled sports car concept capable of doing 0 to 62 mph in less 4 seconds. It combines a fuel cell power converter with a plug-in hybrid setup.

But Hyundai’s hydrogen rollout will shift into high gear with a next-generation fuel cell stack that arrives in 2023. That third-generation system will be smaller, more powerful and more durable.

The group previewed two variants of the new stack, a 100-kilowatt unit and a 200-kW one. They compare with the 95-kW stack in the current Nexo, launched in 2018.

To help popularize the technology, Hyundai wants to slash the fuel cell price by more than half as a step toward achieving price parity with battery-electric vehicles by 2030.

Hyundai Executive Vice President Saehoon Kim, the global head of its fuel cell program, said the fuel cell development is about 10 to 15 years behind that of BEVs. But fuel cell costs have dropped 98 percent over the past two decades, he said. However, the technology is still in its beginning stages, meaning there are still huge gains to be made it slashing costs further.

The long-range plan envisions a so-called Trailer Drone concept, which uses a fuel cell-powered undercarriage on the trucks modeled on railroad cars to support a trailer carrying goods. The underpinning is called a fuel cell e-Bogie, and the Trailer Drone can use one at the front and one at the rear, giving the vehicle “unprecedented maneuverability” through turning maneuvers.

That commercial-first strategy parallels Toyota’s thinking. Last month, Toyota revealed that it plans to start making hydrogen fuel cell modules for heavy-duty trucks at its plant in Georgetown, Ky., from 2023.

Neither Hyundai nor Toyota have abandoned BEVs, which remain a pillar of their carbon-neutrality plans. Toyota plans to sell 2 million EVs and fuel cell vehicles by 2030 under its electrification plan, though battery-electrics are expected to comprise the majority of the total.

“We strongly believe both battery and fuel cell technologies and products are needed to make the transition to zero-emissions mobility,” Hyundai’s Chung said, noting that his company has the size, budget and expertise to handle both. “Fortunately, Hyundai Motor Group is equipped with both technologies,” he said. “While we are one of the few OEMs that has a dedicated BEV platform, we are among just a few global automakers that are selling both BEVs and FCEVs.”

Globally, Toyota has sold only 16,200 fuel cells vehicles since launching its Mirai hydrogen sedan in 2014. Like Hyundai, Toyota wants to go beyond automotive by producing fuel cell systems for everything from forklifts and buses to trains, ships and even moon rovers. Toyota also is developing an internal combustion engine that burns hydrogen-like gasoline.

Hyundai hydrogen boss Kim said it is a positive development that both Asian giants are throwing their weight behind hydrogen, calling Toyota’s hydrogen engine gambit “a good idea.”

“We have to be technology-neutral,” Kim said. “I think every technology using green hydrogen should be promoted. It will all help a hydrogen society.”