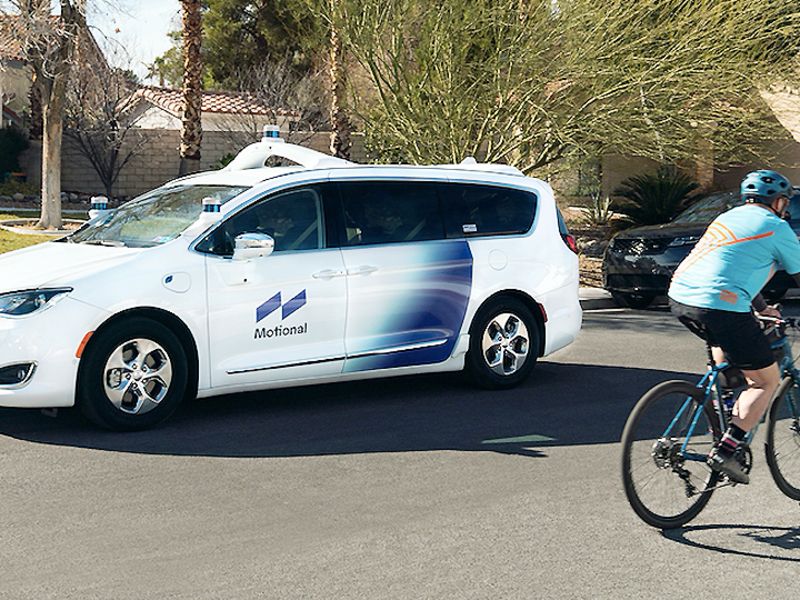 GRAND RAPIDS, Mich. — 5G networks will not completely change the game for autonomous vehicles, but they will make self-driving technology more robust and widespread.

Whether they use 4G LTE or 5G, AVs are connected vehicles and regularly communicate basic safety information, such as vehicle position and driving patterns — an aggressive braking incident, for example. Using 5G, automakers could add more sensor data — larger snapshots of current conditions, for instance — without worrying as much about network congestion.

In the short term, anyway. Once more vehicles start broadcasting 5G signals, all of that extra bandwidth is likely to get eaten up pretty quickly.

But that’s a problem for engineers working on 6G.

“While we are able to meet our needs with current wireless technology, 5G dramatically increases the bandwidth available, enabling more data to flow back to remote monitoring operations and development activities,” Nice said.

An AV generates massive amounts of data from its multiple sensors. Sharma said AVs have “the equivalent to hundreds of laptops’ worth of [computing power] and storage on board.” A fully deployed 5G network could also provide information an AV might need when a sensor fails.

“These additional data points are like an additional sensor which is coming through the network that provides redundancy of information so that you can drive more safely and also traffic will be more efficient,” she said.

The on-board computer splits the data over the four channels so that it has enough bandwidth.

“Ideally, 5G should be a simpler and cheaper solution to that problem, if the 5G network is reliable enough,” he said.

Adding more autonomous vehicles to the roads means overall computing power and memory storage needs also increase, so the network can interact with things such as city traffic management systems and weather and road condition data in near real time, Sharma said. With 5G, this could be done remotely.

“Combined with the massive network bandwidth and speed of 5G, the hardware and software requirements are lowered for autonomous vehicles,” she said. “This will help lower auto manufacturer costs to produce driverless vehicles and the technology barriers limiting mainstream adoption.”

But not everyone agrees that AVs and 5G even need to go together. While no Tesla vehicle is capable of full autonomous driving, the Model S, since its debut in 2012, has shipped with an always-on Internet connection, which the electric vehicle uses for a number of features. But in October 2020, Tesla CEO Elon Musk said his company’s vision-based “full self-driving” technology does not require a connection.

“The system is designed such that even if you have no connectivity whatsoever and you’re in a place that you have never been to before and no Tesla has ever been there, the car should still be able to drive, just like a person,” he said last fall on an earnings call.

Sharma, on the other hand, says that data connections are “essential.”

“Data is at the core of autonomous vehicle evolution, and that’s where network capabilities become an essential part of the equation,” she said. “Though connected and autonomous ve- hicles can currently run on 4G, 5G and [mobile edge computing] makes them more viable. Combined with the development of machine learning models that can interpret traffic and artificial intelligence that emulates human drivers, greater adoption can be achieved.”

Nice said Motional anticipates that 5G adoption will encourage more AVs to use the signal, like a chicken and an egg arriving together. Deploying the technology only in limited areas will mean it becomes difficult to justify leveraging 5G communications in Motional vehicles.

“However, if the infrastructure is deployed widely enough in a geography where we operate, we may take advantage of the benefits of the technology where it is available without strictly relying on it,” he said. “[And] once the technology is ubiquitous enough to be the new standard, we may choose to start relying on it, and solve for a loss of availability as an exception case.”