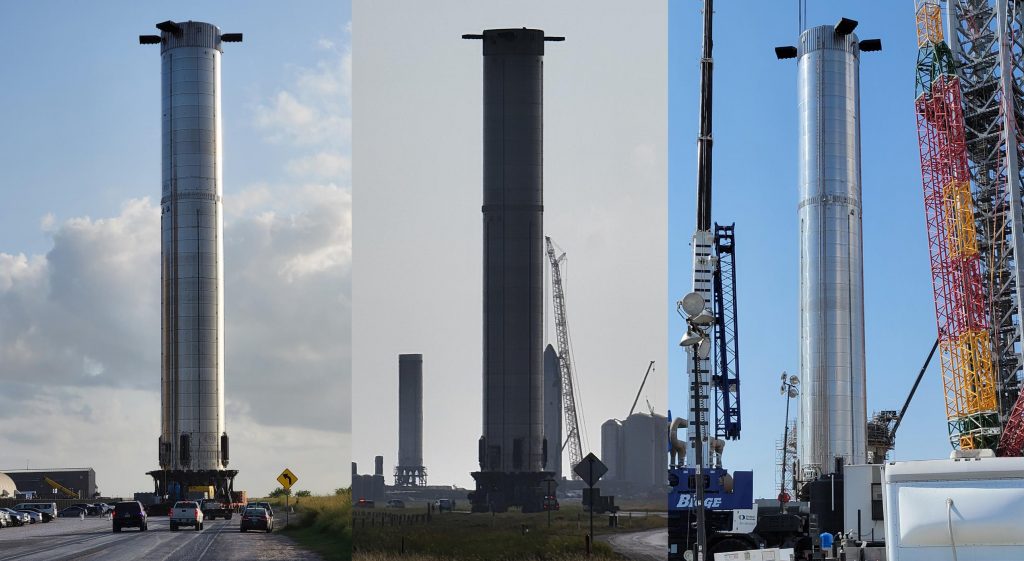 For the second time in five weeks, SpaceX has rolled Starship’s first orbital-class Super Heavy booster from its Starbase factory to the launch pad ahead of a challenging and multifaceted test campaign.

Deemed Super Heavy Booster 4 or B4, the 69m (~225 ft) tall rocket first rolled to the launch pad around August 3rd after SpaceX technicians fitted it with 29 Raptor engines in a single night. Followed by orbital-class Starship prototype S20 a few days later, the two stages of a Starship were stacked to their full height on August 6th, briefly creating the largest rocket ever assembled. Ship 20 was then quickly returned to the build site, where SpaceX workers completed an additional ~10 days of finishing touches – mainly focused on avionics wiring and secondary plumbing.

A week later, Booster 4 followed Ship 20 back to Starbase’s ‘high bay,’ where teams ultimately removed all 29 of its Raptor engines and spent the next four or so weeks performing similar final integration work. Now, after installing what looks like hundreds of feet of wiring, dozens of additional gas and fluid lines, compressed gas tanks, hydraulic ‘sleds’ SpaceX’s first flightworthy Super Heavy has once again returned to the launch site

A bit less than two weeks ago, SpaceX once again installed 29 Raptors on Booster 4. This time around, though, all of those engines are believed to be ready for flight – or, at minimum, static fire testing – after completing qualification testing at SpaceX’s Central Texas development facilities. Intriguingly, every one of Super Heavy’s outer ring of 20 ‘Raptor Boost’ engines is also expected to have its own small umbilical panel that will connect to the orbital launch pad’s ground systems.

When Booster 4 was installed on the brand new orbital launch mount, most of those individual engine connectors had yet to be installed and it’s unclear if SpaceX was actually able to test the complex mechanisms before Super Heavy returned to the build site. This time, all 20 engine umbilical actuators have been installed on the launch mount and it’s safe to assume that those mechanisms will be tested extensively in the coming weeks.

That testing will be part of a much more involved test campaign. Namely, if SpaceX intends to test Super Heavy Booster 4 at the orbital launch site, any booster testing will simultaneously require the shakedown of the orbital pad’s extensive, custom-built tank farm and a wide range of other ground infrastructure that simply didn’t exist at the start of 2021. Booster 4 qualification is no less daunting, as no Super Heavy has ever been fully tested. Now in the midst of being scrapped in place at SpaceX’s suborbital test facilities, Super Heavy Booster 3 did complete a partial cryogenic proof test and a static fire with three Raptor engines, but SpaceX has never fully filled a Super Heavy with >3000 tons (~6.6M lb) of propellant and never static fired more than three Raptor engines simultaneously.

Perhaps the most uncertain part of Super Heavy Booster 4 qualification is its static fire test campaign. However SpaceX gets there, the final challenge will likely be igniting all 29 of B4’s Raptor engines – potentially producing up to ~5400 tons (11.9M lbf) of thrust, thus making Super Heavy the most powerful rocket booster ever tested.