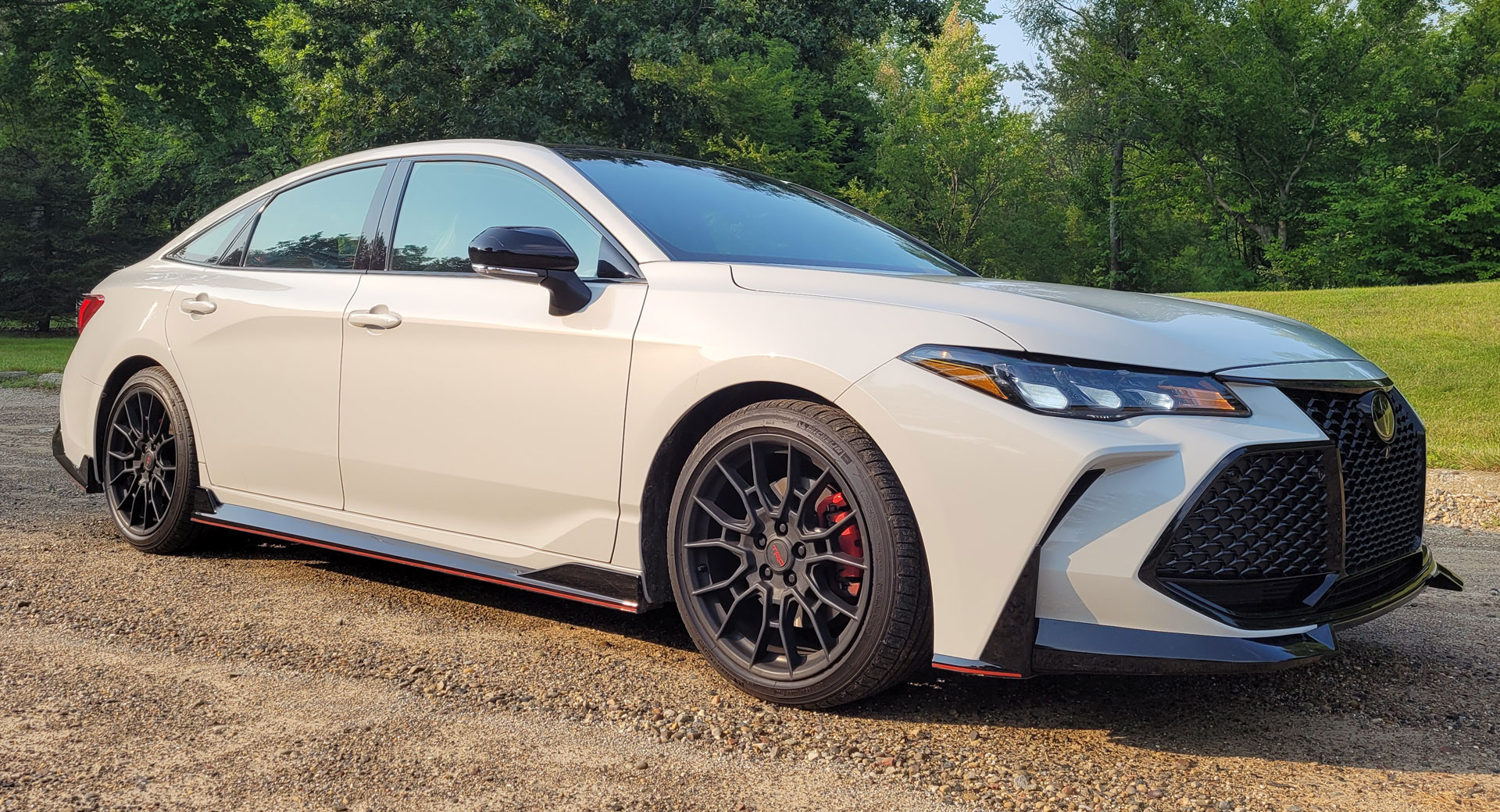 Life has a tendency to throw us curveballs and the latest one came in the form of Toyota announcing plans to discontinue the Avalon, less than 24 hours before a 2021 Avalon TRD was dropped off at my doorstep.

While the timing was less than ideal, there’s no reason to pout as the TRD variant is the sportiest and most unusual Avalon ever created. That being said, it’s discontinued for the 2022 model year so this review is a bit of a last hurrah for the Avalon TRD and the Avalon in general. 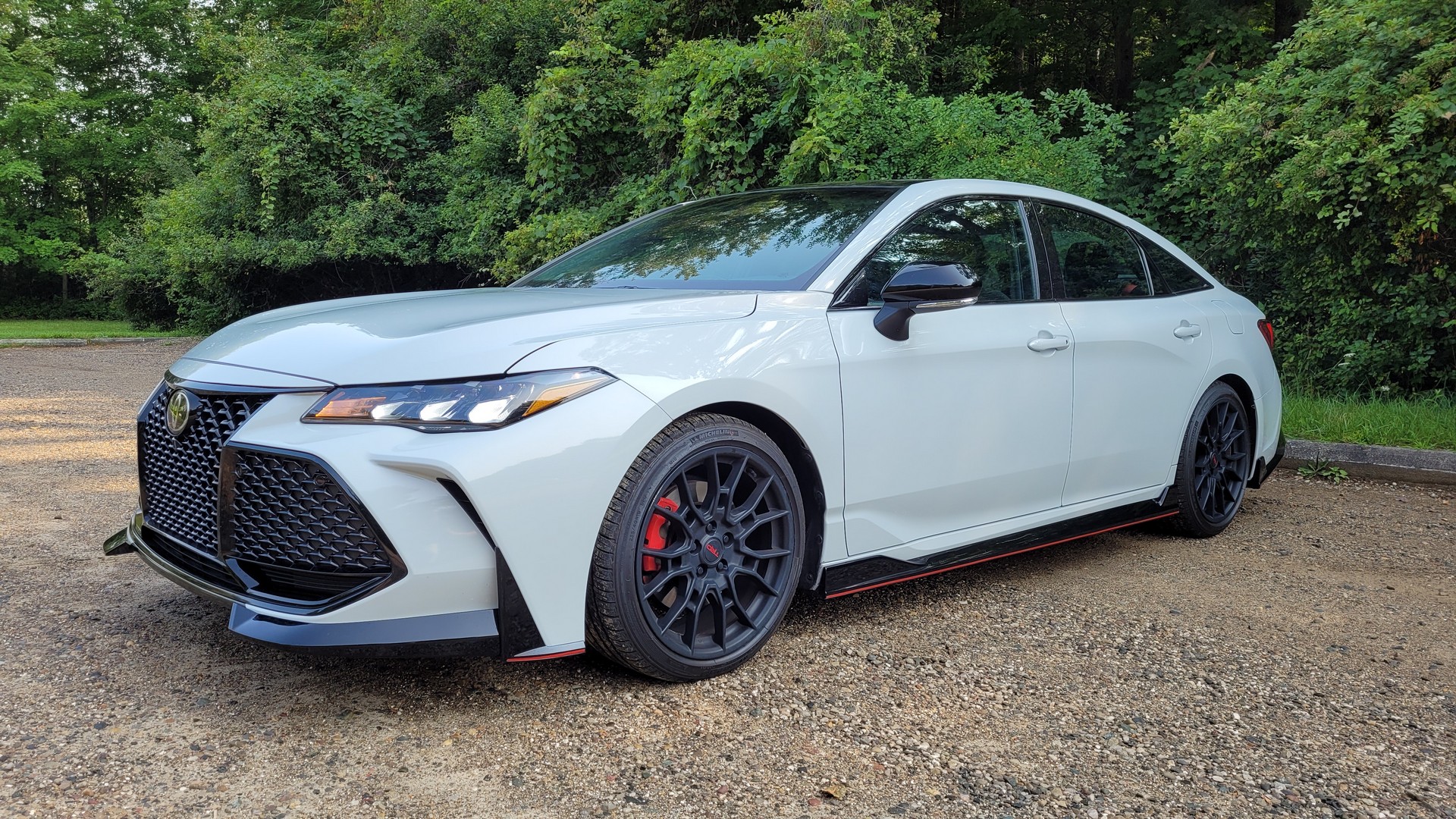 While some sporty versions of large sedans have typically been sleepers, the Avalon TRD certainly doesn’t fly under the radar as it features an aggressive body kit with red pinstriping. It screams for attention and consists of a front splitter, extended side skirts, a rear diffuser and a trunk-mounted spoiler.

Since the Avalon TRD is based on the XSE variant, it also comes equipped with an aggressive front fascia that features a gloss black grille with mesh inserts. It’s flanked by LED headlights with smoked chrome bezels and the model is certainly the angriest Avalon ever created.

The dark theme continues further back as the model has black mirrors and window surrounds as well as a Midnight Black Metallic roof. They’re joined by 19-inch matte black wheels, which are 18 lbs (8.2 kg) lighter than those found on the Avalon XSE.

Rounding out the highlights are a reduced ride height and a cat-back exhaust system. The latter sounds surprisingly good for a V6 sedan, especially in Sport mode.

A Classy Cabin With A Touch Of Sport 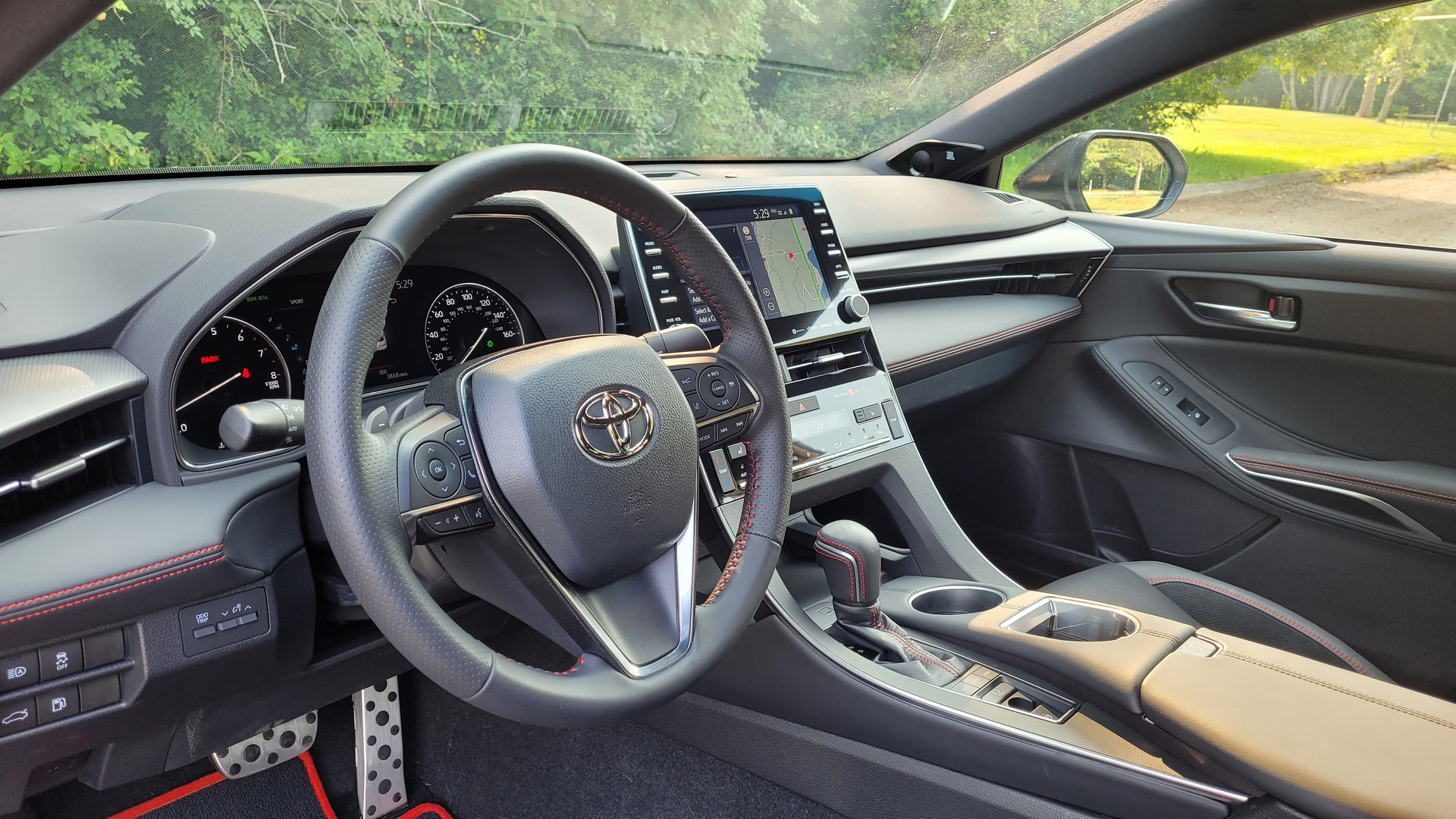 As Toyota’s range-topping mainstream sedan, the Avalon is positively plush but the TRD takes things in a sportier direction. This is immediately apparent as drivers will find perforated SofTex seats with ultrasuede inserts as well as red contrast stitching.  The front seats also have heating and eight-way power adjustment as well as TRD embroidery on the headrests.

Sporty styling cues aside, the Avalon has an upscale interior with a 7-inch multi-information display in the instrument cluster and a 9-inch infotainment system. The latter rises out of the center console, a bit like the display in the latest Mercedes S-Class. 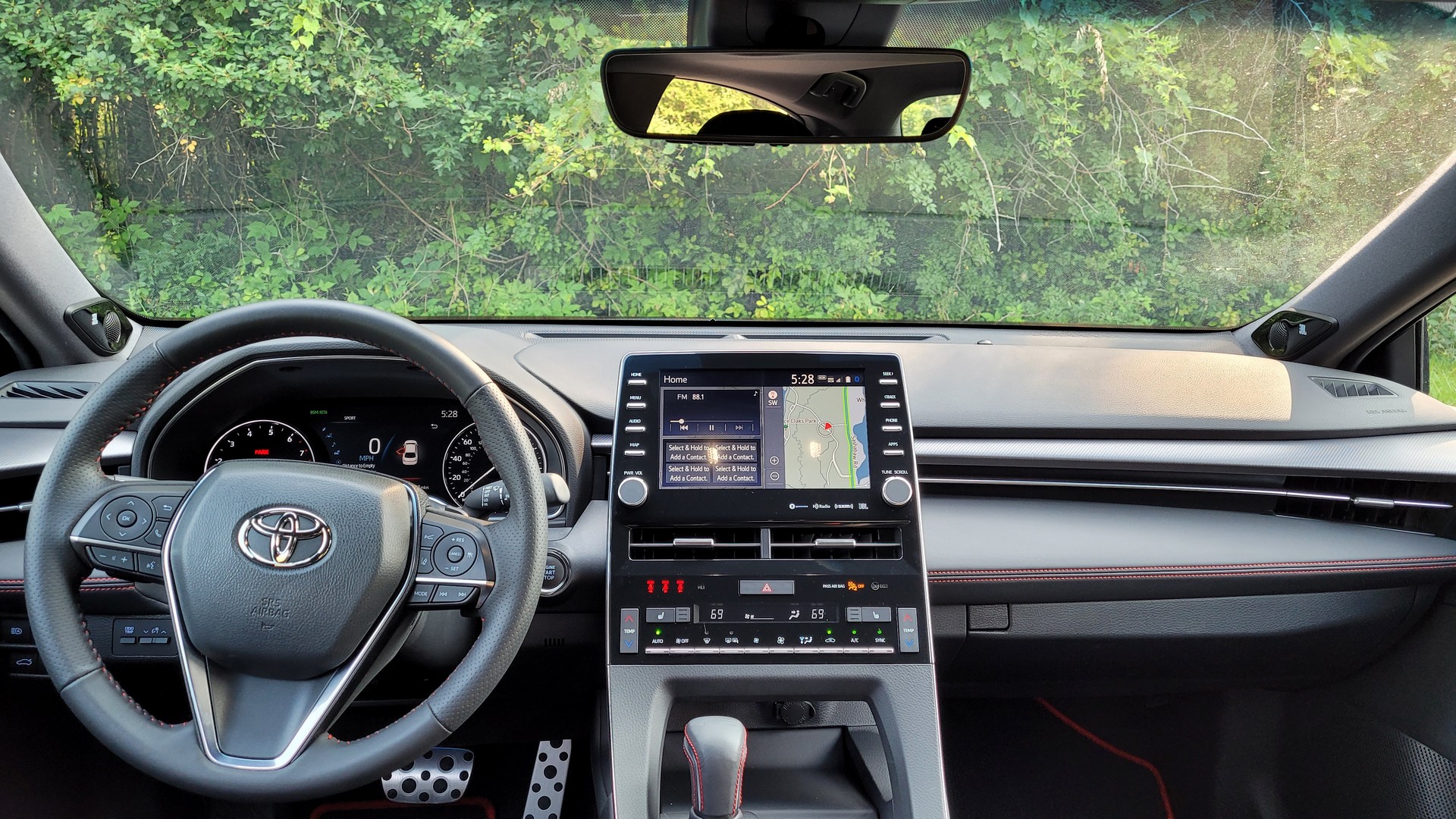 However, that’s where the similarities to the S-Class end as the Avalon’s infotainment system feels a little dated thanks to its old school graphics. That being said, it’s easy and intuitive to use as there’s a helpful home screen as well as physical knobs and buttons. Users will also find speech recognition technology as well as Amazon Alexa, Android Auto and Apple CarPlay compatibility.

The Avalon TRD also comes equipped with soft touch plastics and nicely padded surfaces. They’re joined by high quality switchgear, metallic accents, and standard equipment such as a dual-zone automatic climate control system, a wireless smartphone charger, and an auto-dimming rearview mirror. Our tester was also outfitted with a 14-speaker JBL premium audio system, which is a nice step up from the standard 8-speaker setup. 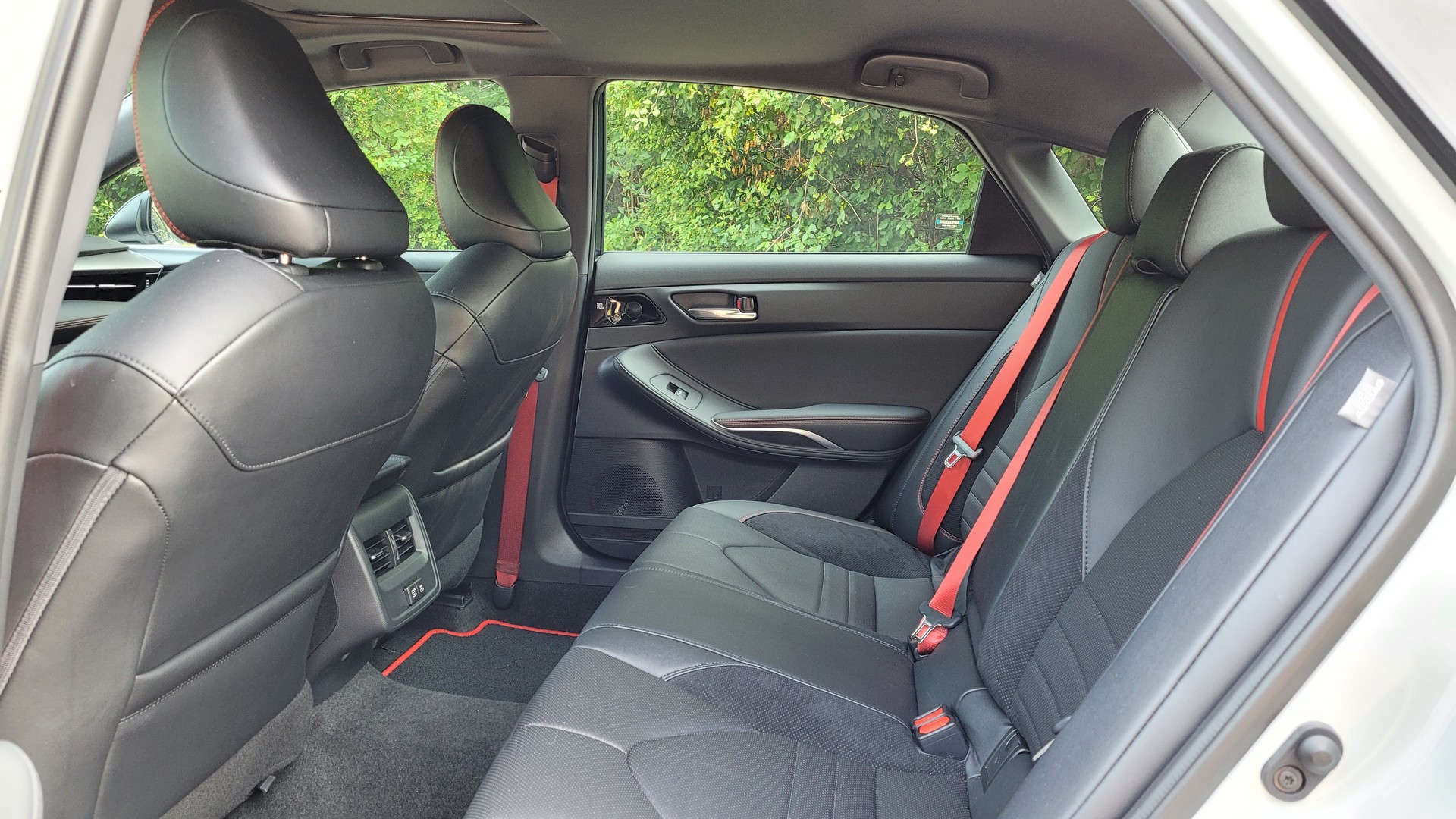 That brings us to the Avalon’s main selling point: the super-sized interior. While the model rides on the same TNGA platform as the Camry, the Avalon’s larger dimensions are immediately welcomed by back seaters.

There’s an impressive 40.3 inches (1,024 mm) of legroom in the second row and this is 2.3 inches (58 mm) more than the Camry. While the latter isn’t exactly lacking in space, the rear seats in the Avalon are impressive as they allow occupants to kick back, relax and even put their feet up.

I’ve been fortunate enough to be chauffeured around in a number of Avalons over the years, and seeing the big sedan pull up to the curb is always a huge relief after spending a few hours cooped up in an airplane. Besides offering tons of legroom, there’s more than enough headroom at the back to keep this 6’ 2” reviewer happy.

Speaking of space, the trunk is worthy of a Sopranos reboot as you could easily store a couple of wise guys inside. In more practical terms, there’s 16.1 cubic feet (456 liters) of luggage room and that’s a cubic foot (28 liters) more than the Camry. That’s a sizable difference and the rear seats can be folded down if you need extra room. 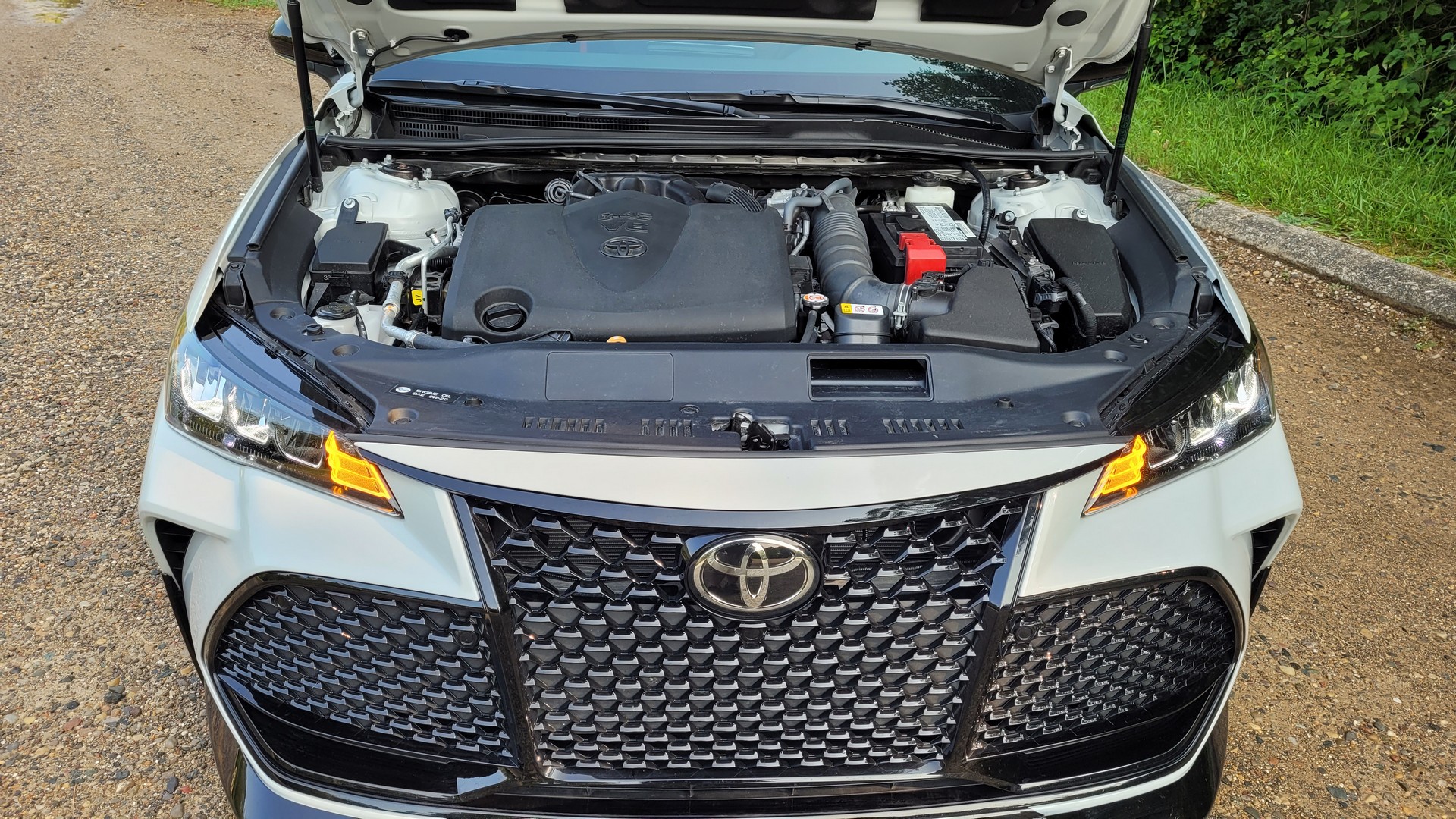 While the engine is shared with tamer versions of the sedan, it has plenty of power and reasonably quick reflexes. We wouldn’t necessarily call the Avalon TRD fast, but it knows how to hustle and sounds pretty good to boot.

The V6 is paired to a smooth shifting eight-speed automatic transmission and drivers can get in on the action thanks to steering wheel-mounted paddle shifters. The model also comes with a Sport mode that suits its character, although Eco and Normal modes are also available. While the latter allows for a slightly more relaxed driving experience, Eco mode is effectively torture as the throttle response is dumbed down to excruciating levels. 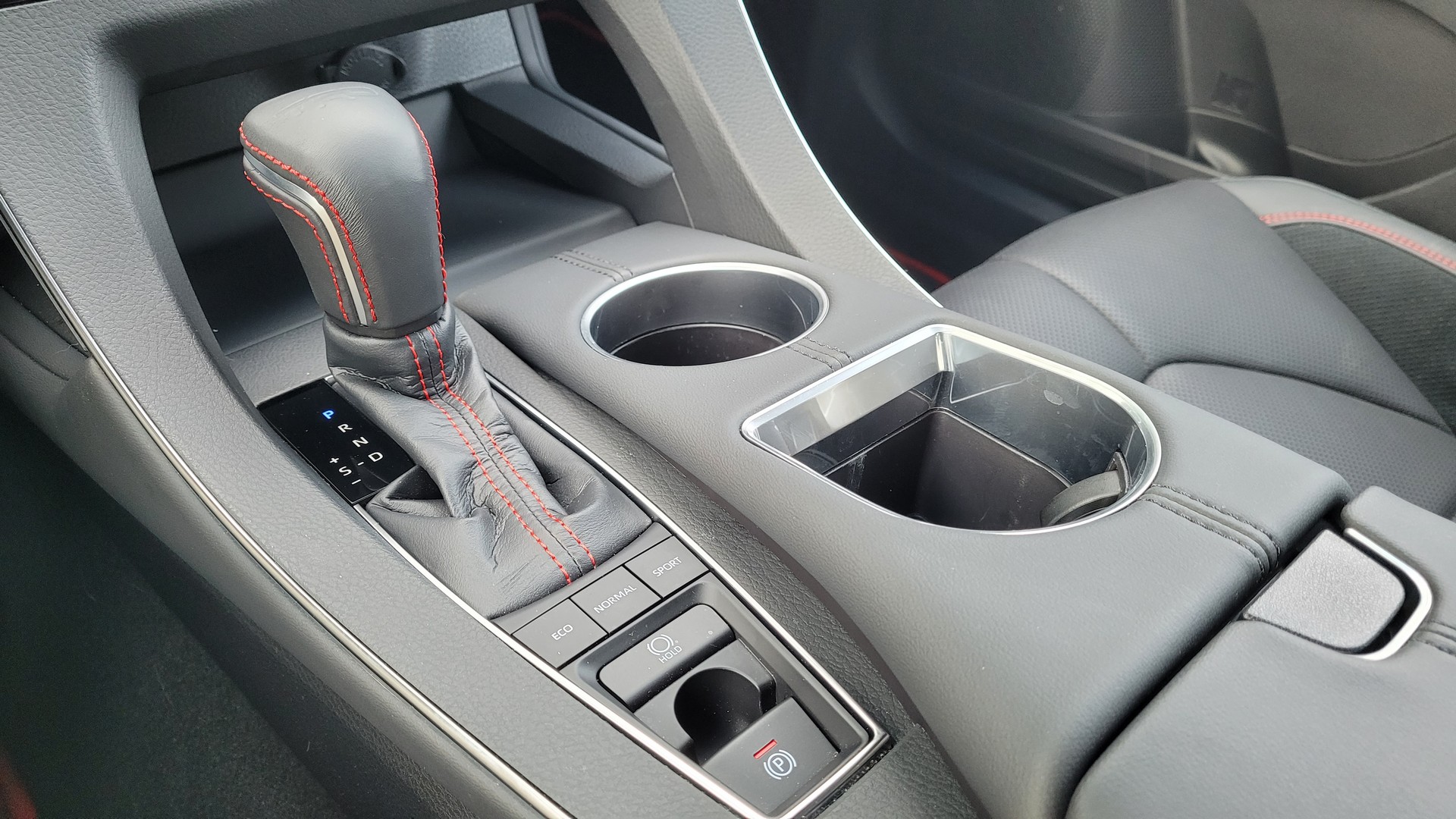 On the topic of economy, the Avalon TRD has an EPA-estimated rating of 22 mpg city, 31 mpg highway and 25 mpg combined. That bests competitors such as the Chrysler 300 and Nissan Maxima, but we only averaged 24.1 mpg after a week of testing. Of course, we’ll throw in our usual disclaimer about extensive idling for photo and video shoots. 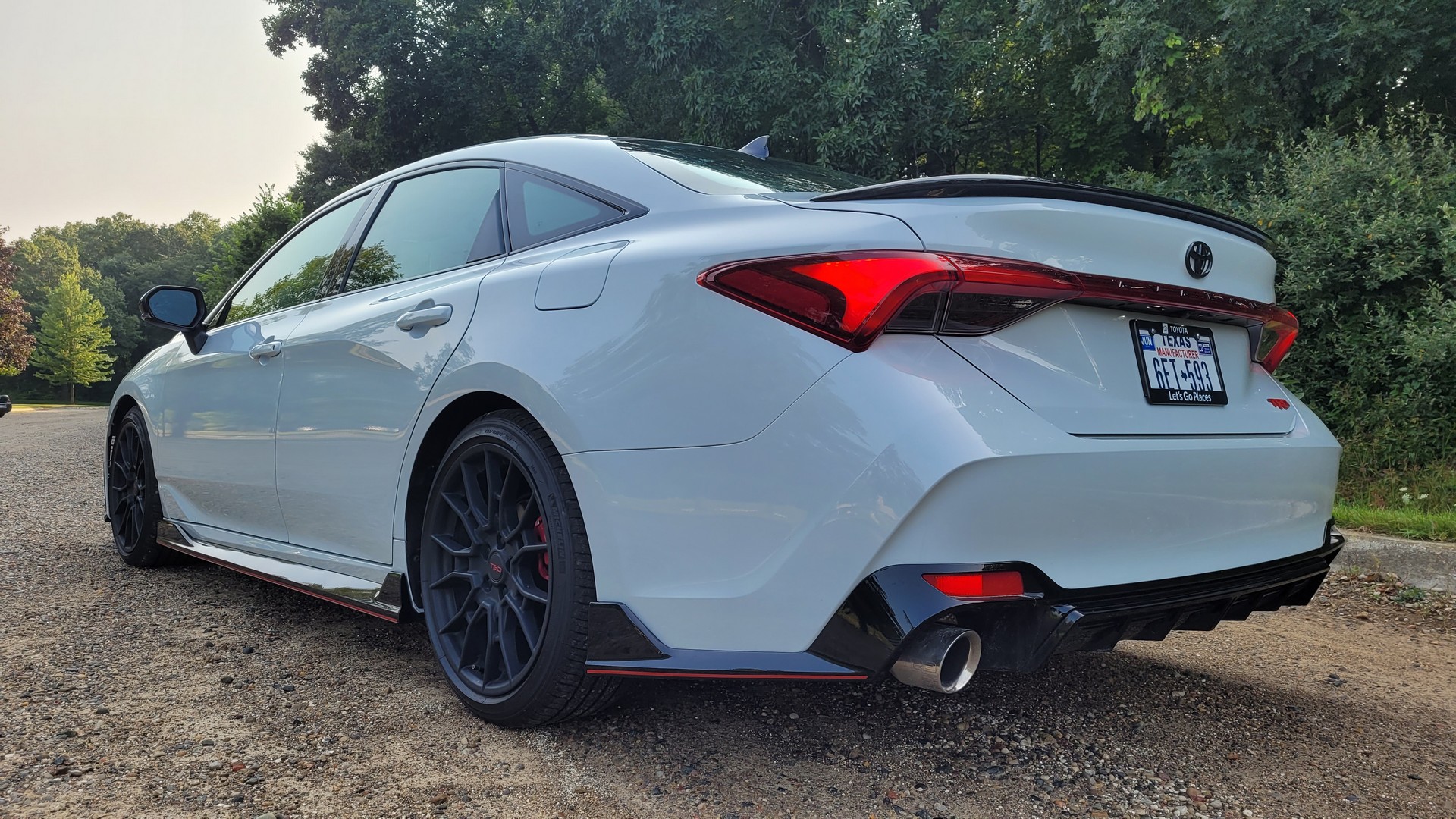 If the Avalon TRD isn’t about straight line performance, you might be asking yourself what’s the point? The answer is handling as it has a track-tuned suspension that was extensively tested at proving grounds in Arizona and Japan as well as the MotorSport Ranch in Texas.

Getting into specifics, the sedan benefits from thicker underbody braces that help to increase torsional rigidity. It also rides on unique coil springs that lower the ride height by 0.6 inches (15 mm) and reduce the center of gravity.

The changes don’t stop there as the Avalon TRD has been equipped with special shock absorbers and stiffer stabilizer bars. They help to increase roll stiffness 44 percent up front and 67 percent out back. 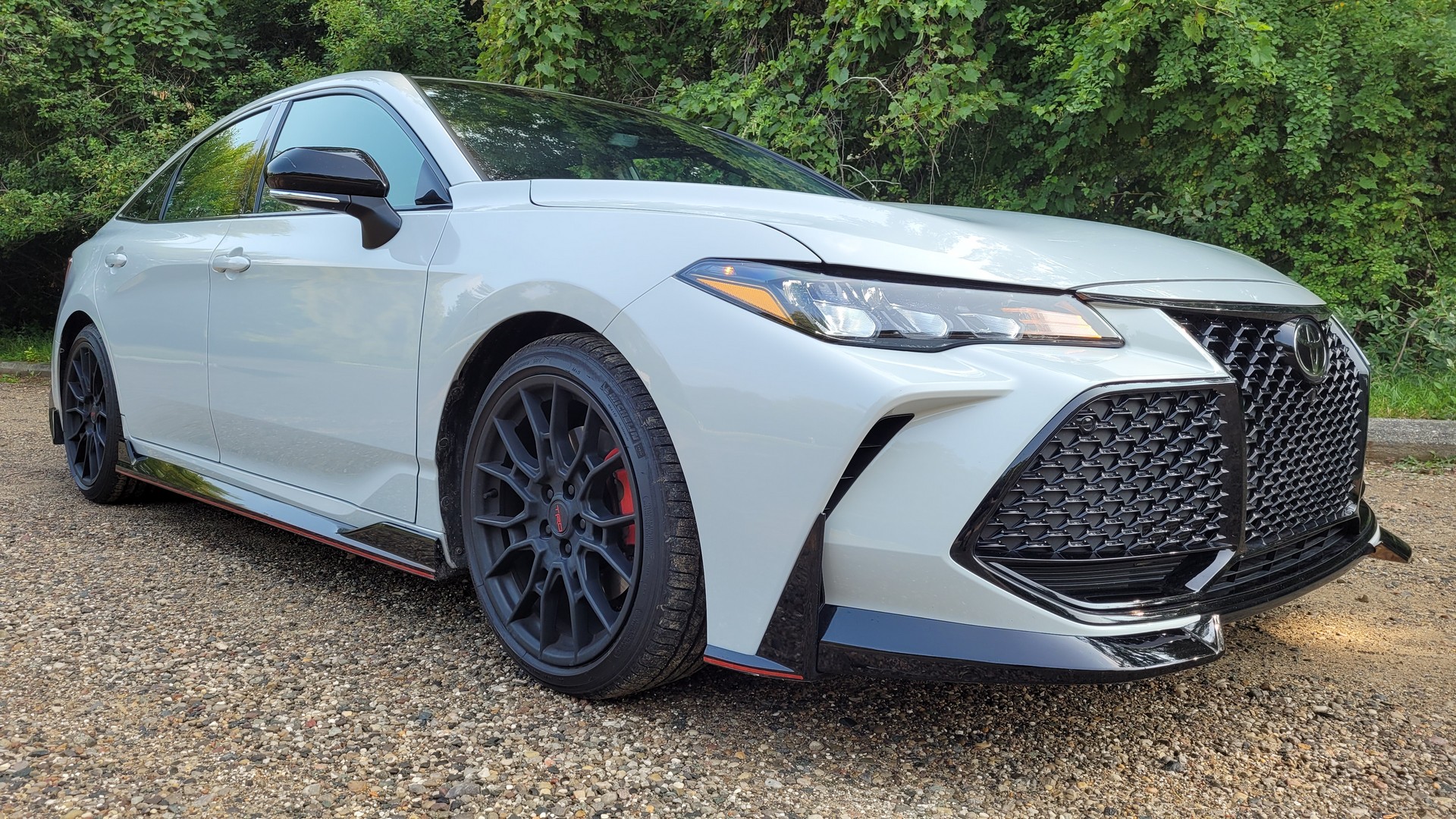 The changes are easy to appreciate as the Avalon TRD features improved handling and a sportier ride that doesn’t feel floaty. You also never get the impression you’re driving a massive sedan that measures nearly 196 inches (4,978 mm) long. These are notable accomplishments and drivers can even take things up a notch by opting for summer tires.

Even more remarkably, the car is impressively comfortable as the changes haven’t marred the Avalon’s ride quality. Minor road imperfections are barely noticeable and even Michigan’s highway humps only result in a modest thump. The experience is Avalon through and through, just a bit sportier.

Getting back to dynamics, the Avalon TRD is equipped with an upgraded braking system that features larger front discs as well as dual-piston calipers. The discs measure 12.9 inches (328 mm) front and 11.6 inches (295 mm) rear, while Toyota notes the brakes have also been tuned to provide more direct feedback. The latter is hard to appreciate without a back-to-back comparison, but the brakes offer plenty of stopping power although there is a bit of travel before they really kick in.

Lastly, the Avalon has a responsive electric power steering system which is a bit light given the car’s sporty positioning. It doesn’t provide a lot of feedback, but this is an Avalon after all.

The Avalon TRD is a little absurd, but it’s hard to argue with the results as the model successfully blends a comfortable ride with a sportier driving experience. Throw in some playful touches and a bit of fun, and this is clearly the most exciting Avalon ever created.

That being said, the TRD variant is an Avalon to its core. This means drivers can expect a spacious and comforting interior, but the model comes up light in the sporting department and it’s hard to get excited when V8 muscle is available elsewhere for less.

That brings us to the impending death of the Avalon in North America. The model will be discontinued at the end of the 2022 model year and this will mark the end of a journey that began nearly three decades ago.

The Avalon has changed a lot over the years, but it has built a reputation for being a comfortable and reliable large sedan.  However, the segment has been shrinking and competitors such as the Buick LaCrosse, Chevrolet Impala, Ford Taurus, Hyundai Azera and Kia Cadenza have already fallen by the wayside. These deaths are the result of shifting consumer preferences and it’s hard to fault Toyota’s entry as it has nearly everything you could want in a large sedan.